Elie Wiesel was a young boy of 14 when his tiny city, a place called Sighet, mostly Jewish, in what was then the Romania-Hungary borderland, was overrun. They came into his little town and they took him and his family. He went to Auschwitz, where his father died. But he survived the war, miraculously. Then, in the 1950s, he wrote a memoir in Yiddish.

Other books by Elie Wiesel and Marion Wiesel 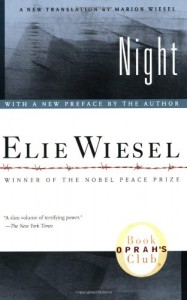