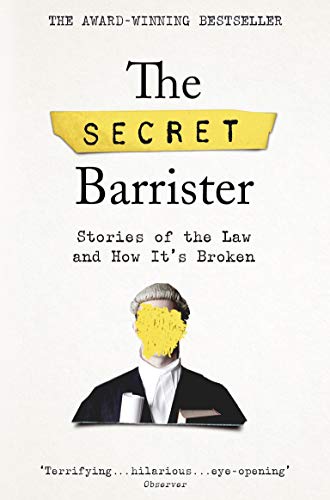 The Secret Barrister: Stories of the Law and How It's Broken

by The Secret Barrister

Q: A functioning criminal justice system is vital to our health as a society. But your book paints a deeply revealing picture of administrative incompetence in the English legal system. We see lawyers receiving their briefs only minutes before they are to present them in court, of blocked communication channels, of court dates being repeatedly postponed, and of crucial evidence vanishing without trace. How did we get to this state?

A: It sounds like a simplistic diagnosis, but the common theme behind many of the ills of the criminal justice system is a chronic lack of resources. No part of the criminal justice process—from police to the Crown Prosecution Service to legal aid to the courts to probation to the prisons—is sufficiently resourced to perform its functions safely and competently. By the early 2020s, the Ministry of Justice will have had its budget cut by over half (51%) in a decade, and this was from a starting point of being underfunded.

The problem with justice is that it simply isn’t a sexy political subject. Aside from transient excitement piqued by tabloid headlines about “soft judges” or “cushy prisons”—headlines which, by the way, are almost always factually inaccurate or misleading—there is little public interest in how criminal justice does or doesn’t work.

People only realise how much they depend on functioning justice when it’s too late—when they are the victim of a crime, or a witness, or find themselves or their loved ones accused of a criminal offence. This disconnect means that it has been politically easy for successive governments to hack away at the foundations of the legal system without incurring any democratic penalty.

Q: You’ve been blogging your experiences as a junior criminal barrister for a few years now. Was there a particular interaction, a turning point, when you decided to become ‘The Secret Barrister’?

A: The turning point came one evening after I had regaled my partner yet again about a catastrophic failing in one of my cases. Having listened attentively and patiently to variants on the same theme for some years, they politely but firmly suggested that I start a blog and Twitter account to share my complaints with a different audience.

Part of the reason we have ended up in this mess, I believe, is that we professionals in the system have historically been very poor at communicating to the public what we do, why it matters and what the problems in the system are. I hoped that by writing something aimed at a non-legal audience it might draw some attention to the things that we see going wrong every day.

Q: As well as being accessible, funny, and meticulously researched, your book shows a real sense of civic responsibility and respect for justice. How do you keep that intact while working in such demoralising conditions?

Quite simply, the people. From talking to healthcare professionals, I think there are strong parallels between justice and the NHS; while the system itself is on the brink, the people toiling within are magnificent, and keep the impossible show on the road by sheer force of will. I am blessed to work alongside some of the most brilliant professionals who, despite what appears like coordinated malevolent political designs to make their lives as intolerable as possible, still don’t lose sight of why we choose this grim area of public life. When I’m having a bad day, they are there to pick me up and remind me why we stick with it.

Read our full interview with the Secret Barrister

Other books by The Secret Barrister 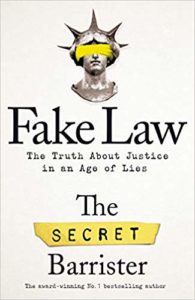 Fake Law: The Truth About Justice in an Age of Lies
by The Secret Barrister