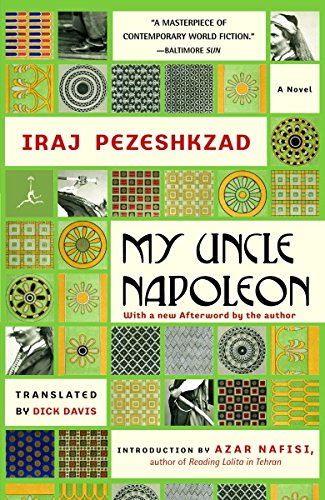 My Uncle Napoleon by Iraj Pezeshkzad

“My Uncle Napoleon’s humour runs very much to slapstick and farce…It is not something that they are well known for outside of Iran, but Iranians have a very highly defined sense of the absurd. Perhaps having endured so many wars, revolutions and occupations has given them a gift for making farce out of tragedy.”

The journalists Jasmin Darznik and Pooneh Ghoddoosi both recommend the satirical novel My Uncle Napoleon by Iraj Pezeshkzad as the most popular Iranian novel of the 20th century and a good introduction to the Iranian character and culture. More recently, Reading Lolita in Tehran has been  translated into 33 different languages and sold millions of copies in the West, but it was never very popular in Iran

The historian Ali Ansari recommends the best books on Iranian history and Paul Lay, the Editor of History today, recommends Abbas Amanat’s book Iran: A modern history as one of the top history books published in 2018.

On a less cerebral level, the chefs, Jila Dana-Haeri and Shahrzad Ghorashian recommend their best books on Persian cookery.  And Penelope Hobhouse discusses her fascination with Persian gardens in her interview on the best books on horticultural inspiration.

Many of our other interviews touch on Iran or Iranian themes, in particular those related to Iran and global geo-politics and the role of women in Iranian society.  The veteran Middle East journalist, Patrick Cockburn, discusses Iran’s influence in his best books on the Iraq war and the academic and human rights activist, Kanan Makiya discusses the complicated relationship between the Arab Shiite Muslims of Iraq and their Iranian co-religionists.

The former CIA officer, Robert Baer, the global security  consultant, Chris Abbott and Amnesty International’s director of international advocacy, Steve Crawshaw, all recommend books on Iran, or books that involve Iran in their discussions of international security and human rights.  The historian Margot Badran, recommends books on Iranian feminism in her interview on Islam and feminism.  Iranian feminism mixes with football in John Turnbull’s recommendation of the film, Offside.

Reaching further back in time, the Persians crop up in Adrienne Mayor’s best books on the enemies of Ancient Rome.

The best books on Iran, recommended by Pooneh Ghoddoosi

The best books on Iran, recommended by Pooneh Ghoddoosi

From the 14th century poetry of Hafez to the 21st century’s Reading Lolita in Tehran, Iranian BBC journalist Pooneh Ghoddoosi discusses books that give an insight into the culture, society, and politics of Iran

The best books on Modern Iran, recommended by Jasmin Darznik

The best books on Modern Iran, recommended by Jasmin Darznik

Everyday life in Iran is often mischaracterised, says the Iranian author and academic – especially when it comes to the struggles of its women. She recommends five books that give us a window on Iranian history and family life

The best books on Iranian History, recommended by Ali Ansari

The best books on Iranian History, recommended by Ali Ansari

At the height of its greatness, the Achaemenid Persian Empire was the largest empire the world had ever known. Too often it is given merely a villainous walk-on part in the heroic history of classical Greece. Here, historian Lloyd Llewellyn-Jones explains why that needs correcting, looks at its cultural achievements and discusses why the first Persian empire is worth studying in its own right and on its own terms.