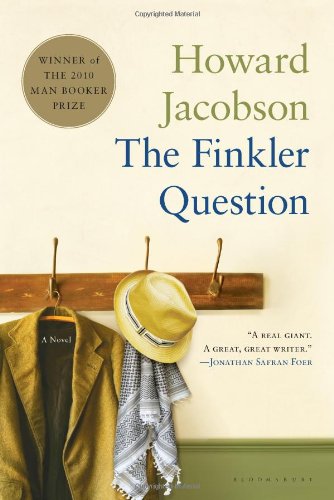 The Finkler Question by Howard Jacobson

“This is a very funny book about middle-aged men fighting with each other and fighting to maintain their self-esteem in pathetic ways. It’s very accessible. Sam Finkler, a popular thinker, media personality, and bestselling author, and his friend Julian Treslove reconvene with their former professor, an older Jewish immigrant from the Czech Republic. The book is about how Jews are expected to cooperate with contemporary anti-Semitism. To be accepted, Finkler renounces and demonizes the state of Israel. This book came out in 2010; only in more recent years has the UK started to grapple with the open anti-Semitism in its society.”

Welcome to the Five Books recommendations on Judaism and Jewish culture.

Founded over 3500 years ago, and perhaps the oldest monotheistic religion, Judaism has a poignant and often distressing history. Antisemitism has been a plague of both the eastern and western worlds.

From a literary perspective, our book recommendations examine the rich cultural and literary world of Jewish writing. These include the best Jewish fiction, chosen by novelist Allegra Goodman, but also the best contemporary Israeli fiction. Harvard Professor Ruth Wisse discusses the distinctive nature of Jewish humour, picking her favourite works.

As regards politics, our book recommendations also cover the nature of Zionism and the establishment of Israel.

The Best Books for Hanukkah, recommended by Dara Horn

The Best Books for Hanukkah, recommended by Dara Horn

Hanukkah means ‘a dedication’ and the celebration of the Jewish holiday towards the end of every year commemorates the success of the Jewish revolt against the Seleucid Empire and the re-consecration of the Temple of Jerusalem in the second century BCE. Here, award-winning novelist Dara Horn recommends books that speak to the powerful themes of Hanukkah and explains why Jewish people are encouraged to light menorahs publicly around the world.

The best books on Jewish History, recommended by Gershon Hundert

The best books on Jewish History, recommended by Gershon Hundert

Gershon Hundert, Leanor Segal Professor of Jewish Studies at McGill University, talks about recent revisions to the conventional understanding of Jewish history and selects the most influential current writing on the subject.

Jewish literature doesn’t have to be written by Jews, says the novelist, but it does have to speak to the Jewish experience. She tells us about the Jewish writing, from Chaim Potok to George Eliot, that means the most to her.

The best books on Anti-Semitism, recommended by Abraham Foxman

The best books on Anti-Semitism, recommended by Abraham Foxman

Why has anti-Semitism been such a problem down the ages, and why does it persist today? The emeritus director of the Anti-Defamation League, Abraham Foxman, recommends the best books to better understand anti-Semitism.

The best books on The Bible, recommended by Nicholas King

The best books on The Bible, recommended by Nicholas King

The Bible is not always an easy read—nor is it always obvious how or where to start reading it. Here, Nicholas King, a Jesuit priest and biblical scholar, chooses five books to help you start getting to grips with what is, arguably, the world’s all-time bestselling book.

Rabbi Lionel Blue chooses some of his favourite books. Fans may be surprised by his choices, but one thing is key: a happy ending.

The best books on Israel, recommended by Amnon Rubinstein

The best books on Israel, recommended by Amnon Rubinstein

The best books on Zionism and Anti-Zionism, recommended by Gabriel Piterberg

The best books on Zionism and Anti-Zionism, recommended by Gabriel Piterberg

Israeli historian Gabriel Piterberg tells us about works of scholarship that have challenged the Zionist Israeli narrative of modern history.