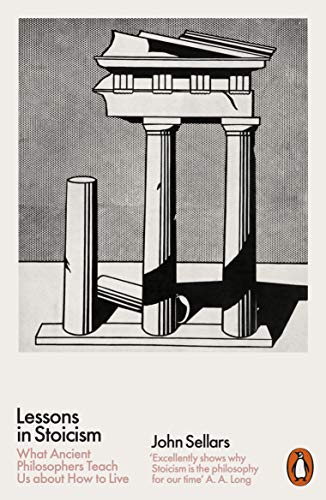 Lessons in Stoicism: What Ancient Philosophers Teach Us about How to Live

“Here, in around 80 pages, Sellars gives a lucid, easy-to-follow account of what Stoicism as a way of life amounts to, and how you might start to put it into practice.”

Our philosophy editor Nigel Warburton’s  review of Lessons in Stoicism:

Ancient Stoicism was above all a practical philosophy, one that focused on worrying about the things that we can control, and remaining unaffected by everything else, no matter how grim or disturbing it might seem. This was the enduring legacy of Epictetus who divided the world into those things over which we have some power and those we didn’t. Stoics work on themselves, so that they live calmer lives. It is a kind of self-help philosophy at heart, and it has many present-day adherents: there are Stoic camps, Stoic conferences, Stoicism gurus, and a stream of new books delivering this ancient philosophy in palatable form for the Twenty First Century.

John Sellars’s Lessons in Stoicism has a number of advantages over competing titles in this genre. First, it has the twin virtues of brevity and clarity. The basic practical message of Stoicism is uncomplicated and doesn’t require hundreds of pages of elucidation; the more scholarly aspects of the topic, and the metaphysical theories underlying it, are largely irrelevant for the contemporary Stoic who wants a philosophy to live by rather than a lesson in the interpretation of pre-scientific beliefs. Here, in around 80 pages, Sellars gives a lucid, easy-to-follow account of what Stoicism as a way of life amounts to, and how you might start to put it into practice. A further virtue of this excellent little primer is Sellars’s skill in summarising the work of the philosophers he writes about. To cover so much ground without merely skimming the surface requires real skill as a writer, and to some extent as a teacher – the book’s title Lessons in Stoicism is apt.

Sellars concentrates on just three key Roman Stoic thinkers of the First and Second centuries BCE: Epictetus, Marcus Aurelius, and Seneca, and what we can learn from what they wrote. Don’t expect any detailed historical and biographical contextualisation of this – Sellars is mainly interested in these three thinkers for what they can teach us today, not as historical figures. All three believed that suffering principally arose from the way we think about what happens rather than from the way the world is, and that, at least in principle, it should be possible to eliminate most of life’s fears, anxieties, frustrations, anger, and more, simply by refocussing attention on our own reactions to what happens, and developing new habits. How we do that is a matter of developing a new kind of awareness and new habits. This may sound easier said than done, which it is. Some disciplined individuals work on their own lives and patterns of behaviour effectively in isolation (sometimes obsessively so), but Sellars suggests learning how to achieve a kind of equanimity in the face of what life throws at us may better be achieved in a group – he is a founder of the annual Stoicism Week, an event in which people around the world undertake to live like a Stoic for 7 days to see how it might improve their lives.

Sellars’s book is an excellent starting point for anyone interested in experimenting with this approach to life, one that you might follow with Massimo Pigliucci’s How to Be a Stoic, or with William B. Irvine’s A Guide to the Good Life.

Other books by John Sellars 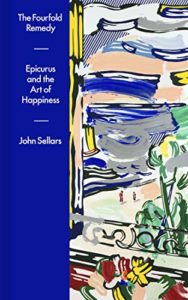 The Fourfold Remedy: Epicurus and the Art of Happiness
by John Sellars