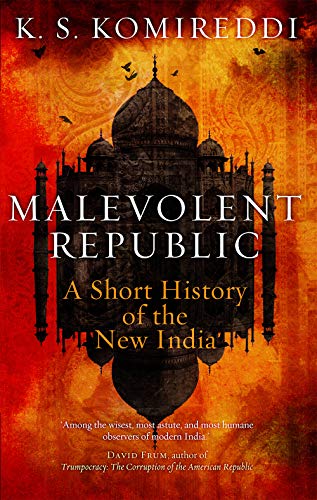 Malevolent Republic: A Short History of the New India

Malevolent Republic by K.S. Komireddi, an Indian essayist and author, is a highly readable polemic tracing India’s history over the last seven decades in just 200 pages. The title makes no bones about the author’s angle: he is relentlessly critical, sparing no one and nothing in his quest to understand how India got to the point it’s at today. He writes, “India can scarcely be taken seriously as a ‘democratic counterweight’ to China…as it itself transforms into a brutally exclusionary Hindu-supremacist state” run by “bigots dedicated to destroying all that made it.” It’s not just India’s current leader that comes under attack. Indeed, Modi’s path to power seems almost incidental given the missteps of the preceding prime ministers—from Indira Gandhi, a ruthless leader “devoured by the ogre she fostered”, to Manmohan Singh, politically “the least qualified candidate for the job”.