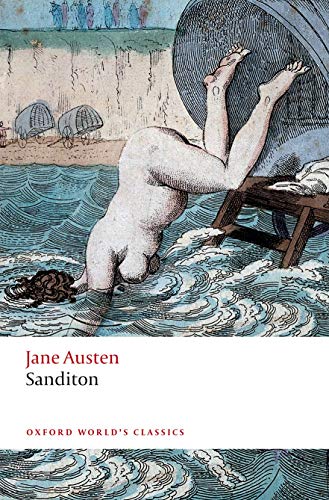 Sanditon is the book Jane Austen was writing the year she died and never finished. In Sanditon, the turns of phrase and wry observation of human behaviour are distinctly Jane Austen, but that’s about it. As Oxford professor Kathryn Sutherland writes in her introduction to the book, “Only one paragraph in, we know that Sanditon will be unlike any other novel Austen wrote.”

Sanditon is the name of a fictional seaside resort, and even without the rest of the book, we can guess how it would end, with overly optimistic investors in the late 18th century sea-bathing craze losing all their money. Sadly though, Sanditon ends after just 70 pages. It’s by no means a satisfying read and it’s too short to develop sympathy with a main character, but if you love Jane Austen books, it’s still a pleasure to be with her one last time, looking out at the world.

Another important reason for reading Sanditon is pointed out by Devoney Looser, a professor at Arizona State University and author of The Making of Jane Austen, in her interview on ‘The Alternative Jane Austen.’ She talks about how incredibly moving is is to read Jane Austen’s writing at a time she was dying: Sanditon “deals with illness, hypochondria, and some things that you can see must have been incredibly hard for her to mull over and write about – and make jokes about – while she herself was not well.” Austen stopped writing in March 1817, and died July 18th.

Sanditon has already been adapted for television by Andrew Davies (writer of the iconic Pride and Prejudice adaptation starring Jennifer Ehle and Colin Firth). To speak of artistic license would be an understatement, but watching it is still a lot of fun.

Sanditon is the novel Jane Austen was writing when she died, and it ends, unfinished, after just 70 pages. In this Oxford World’s Classics edition, Kathryn Sutherland, a professor of English literature at Oxford, is able to fill in some of the background in what is otherwise be quite a limited/brief reading experience. (You could also watch the wildly inaccurate TV adaptation of Sanditon)