The best books on Rugby

First, please tell me what your interest in rugby is, and where it comes from.

I played rugby for as long as I could as an adult. I played it in countries all around Europe – in particular in France and Switzerland, Scotland, Japan, and, of course, England. I wrote a book in 2003 called Muddied Oafs, and it’s the story of the various clubs I played for. I went back at the age of 35 and played another game for each of those teams, and looked at how the clubs had changed since the game had gone professional. 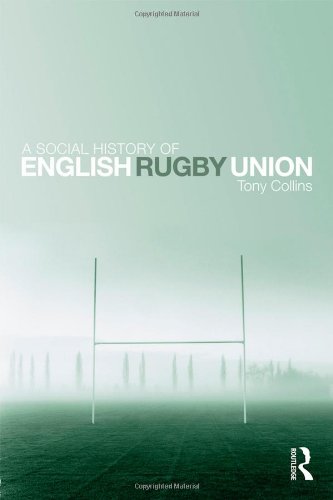 Could you just, for someone utterly ignorant, describe the difference between rugby union and rugby league?

Aha! Well, if you really want to know about the difference, you need to read Tony Collins’s Social History of English Rugby Union, which brings a lot of different sources together for the first time. One of the things Collins explains is how rugby broke off into the two different sections.

Well, the main difference is that rugby league is a professional game. Originally, rugby was an amateur sport, and in the late 1800s there were questions about broken time payments – people taking time off work, especially in the North, to play rugby; they wanted to be remunerated for that. The people playing rugby in London were mainly from private schools, with private incomes, and therefore they didn’t think anyone should be paid and that the amateurism was very important. In the North they said, ‘Blow to that, we are going to pay our players,’ and they became rugby league, a game for 13 players (whereas there are 15 in rugby union). Rugby union went professional about a hundred years later.

Are the rules different?

Well, there are whole books about it! I would need to go and write an MA before I could explain the difference. I mean, yes, they are slightly different.

But the Social History of English Rugby Union describes how rugby league broke off from rugby union. Anyone looking for an essential book about rugby should read this book. It’s about where the game started – did it start at Rugby…?

Almost certainly not. It’s been a creation myth for the game which has been very useful, but really, it’s very unlikely that it started there, although it evolved out of the football games of the 18th century in the same way that Association football evolved out of the same original games. Rugby was a slight variation, but the game was codified through the public schools, and this book tells you about the influence of the public schools and later on how the game changed as it spread around the world. It’s a very good one-stop shop for all these questions, if you want to know how the game started, and how it got to where it is now. 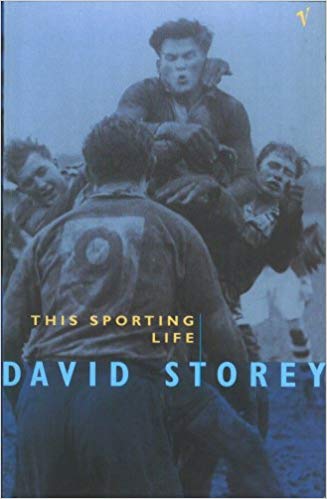 This is actually a book about rugby league, but – like some players of rugby – it can play both codes. This book really goes across both codes, and is about the harshness of the game on the pitch, and how that can relate to life off the pitch as well. It is just a very accurate, gritty representation of how the hero can be expressive on the pitch among men, and much less expressive in the life he’s trying to lead. He breaks his nose in the second paragraph and loses two teeth, which immediately gets you into the book. There’s a film of this with Richard Harris in it.

What does the book say about life?

Well, it’s about a rugby league player in the North of England, and it was thought to be a regional novel. In fact, though, it’s a rugby novel, and it has stood the test of time. It’s about this player’s attempt to try and make sense of the world around him with this very limited appreciation of the world through rugby. The fact that it’s rugby league doesn’t really matter; it’s essential for gaining an insight into rugby because however interesting it is on the pitch, however interesting it is to play, there are limitations to the way in which an attitude that succeeds in rugby can succeed in life.

What attitude are you talking about?

Well, the aggression, and the loyalty to your teammates. Unquestioning loyalty is not always a useful quality to have in life.

It sounds quite military.

Yes. You have to rely on the other people to do what they’re doing, and you have to be confident that they will be backing you up.

Are you saying that rugby players have unsuccessful personal lives?

In this novel, the hero has an unsuccessful personal life. Look at Will Carling. 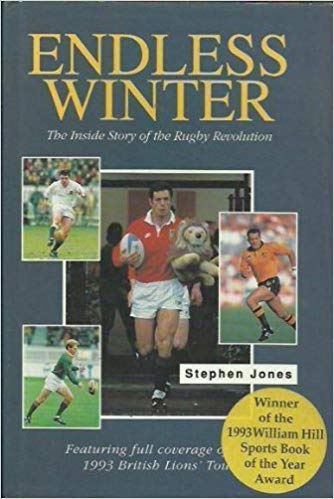 Your next book is Endless Winter.

This is a book written in 1993, just before the game went professional. Stephen Jones is the chief rugby writer for The Sunday Times, and has been for years. He realised that the pressure was on the game to change and to go professional to survive in the modern world. He writes this book looking to the past as well as the future; it’s written just on that tipping point, and he is standing on the hinge, perfectly placed to write that book. You get a fantastic insight into why it had to change, which is essential to understanding how it’s developed to the place where it is now.

What kind of insights are those? And why did the game have to change?

It had to change because the players were not getting their just rewards for a game that was starting to go global – and therefore there were issues like marketing rights. Huge crowds were watching in the rebuilt Twickenham stadium, so lots of money was coming through the turnstiles, and none of it was going to the players. At the first World Cup, in 1987, the game started to go global and became part of the global sporting marketplace. That’s what this book recognises, and it also looks at the pressures on the players, administrators and fans. 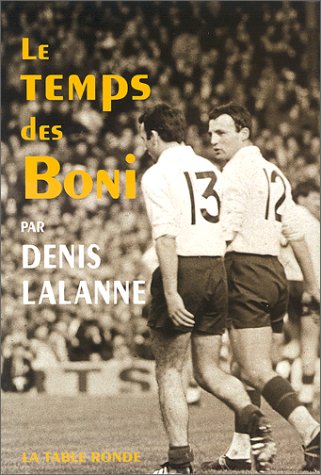 France is essential to rugby history. You can’t have a list without a French book in it. If the French weren’t there, the game wouldn’t be the game as we know it today. It would just be a jamboree with former colonies and the Empire. The fact that France took up rugby through the 20th century meant that there was a platform for it to become a global game. If it had been an Empire-only game, it wouldn’t have been so attractive or have believed in itself that it could spread. France – and also, gradually, Italy – is embracing the game, so we know that it’s not something that’s limited to the culture of Empire.

This book embodies the romantic French approach to rugby. They have a tenderness for rugby that comes out in this book. It’s full of great quotes like this: ‘God was a centre three quarter, the Devil is a little bit Australian, a little bit rugby league.’ It’s actually a biography of two brothers, the Bonaventure brothers, who embodied the French flair for rugby in the 1960s – they took risks and were very nonchalant about the way they approached the game. The biography of these romantic players demonstrates the romantic French attitude to the game. The French write about rugby in the same way we English write about cricket. In France, the really good sportswriters write about rugby, whereas here the good writers write about cricket. That’s part of the challenge of being a great sportswriter in France. 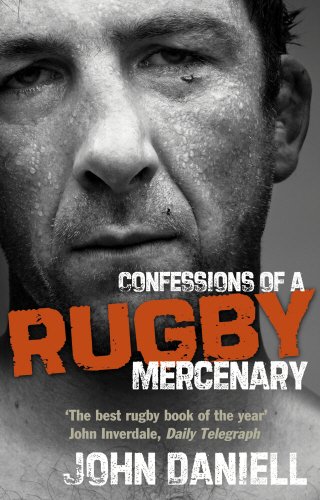 Confessions of a Rugby Mercenary

Your final choice is Confessions of a Rugby Mercenary.

This is quite a recent book, and it represents the genre of player biography. A large part of sports books output is player biography and autobiography. John Daniell wrote this himself, and it’s good because he’s a star player but not a superstar player. He wasn’t an international. It’s an authentic picture of what it’s like on the inside now to be a professional rugby player, just below the top level. You get insight you wouldn’t get from the six star players who are treated in a special way to offset the obstacles of their life. It’s fantastically honest and very well-written. It’s about how professionalism has meant that the players can play with their personal pride intact, but it has compromised team spirit – and there’s an inevitable selfishness in the way that professional players need to approach the game in order to earn a living.

One last question. Who is the greatest rugby player of all time?

It’s almost certainly a Welshman. You pick between three or four. I think it probably has to be Gareth Edwards.

Author and rugby enthusiast Richard Beard is Director of the National Academy of Writing in Birmingham.

Sports, Games & HobbiesRugby
Save for later

Ed Smith on My Life and Luck Books

Mary King on The Equestrian Life

John Turnbull on Soccer as a Second Language Books

Tanni Grey-Thompson on The Spirit of Sport

Philip Barker on The Olympic Games

Rick Telander on American Football (and its Dark Side) Books

Author and rugby enthusiast Richard Beard is Director of the National Academy of Writing in Birmingham. 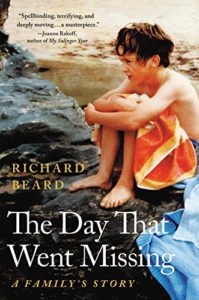 The Day That Went Missing: A Family's Story
by Richard Beard 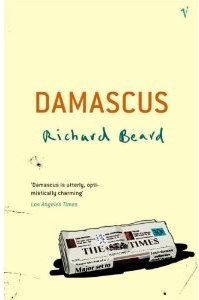 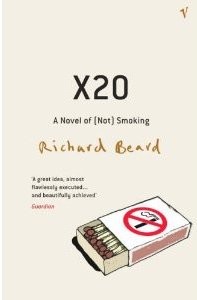 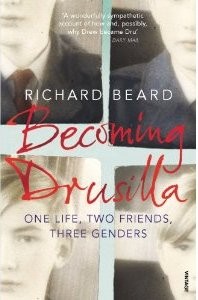 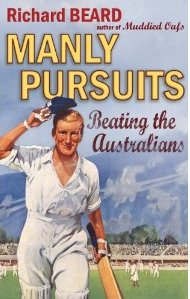