The best books on Medicinal Marijuana

The Italian cardiologist and fellow of the International Association for Cannabis as Medicine proposes five books on Medicinal Marijuana and explains why we should be reading them. 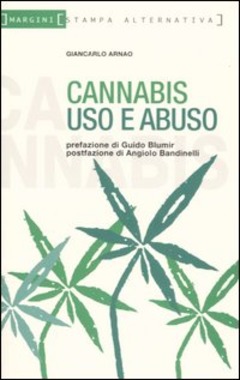 This book is personally important as it was the first book that really introduced me to the subject of therapeutic cannabis. It takes a look at cannabis in all its different aspects. There is one short chapter that talks about the experiences of cannabis therapy in the USA, and about a certain Robert Randall who fought through the courts and won the right to cure his glaucoma with cannabis, which was supplied to him directly by the National Institute on Drug Abuse. I first started to be interested in the subject through this book, which encouraged me to look further into the subject, leading me to read my second chosen book by Dr Lester Grinspoon. 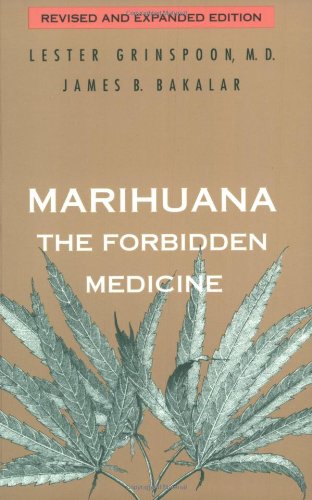 by Dr Lester Grinspoon and James B Baker

Which is Marijuana the Forbidden Medicine.

This is a more medical book. Dr Grinspoon is a psychiatrist and he initially approached the whole subject of medicinal cannabis with a rather unfavourable outlook. He was meant to be writing a report for the US government on the effects of cannabis but, as he himself says, the more he delved into the subject the more he realised that the presumed harmfulness of cannabis had been exaggerated for political reasons, and he found cannabis to have a series of positive effects on health. So he started to gather information from patients, which formed the basis of this book.

“The more he delved into the subject the more he realised that the presumed harmfulness of cannabis had been exaggerated for political reasons.”

Moving beyond this book for the moment, if we look at the scientific evidence on the subject, there is growing proof in favour of medicinal cannabis. If you look at the potential negative side effects, they are negligible compared to the side effects of the majority of more traditional (allopathic) medicines. The first book I mention and, in part, the second book too, could be considered part of a counter-cultural movement, but my third book marked the moment when the issue became a serious scientific and medical debate – it entered the mainstream, so to speak. 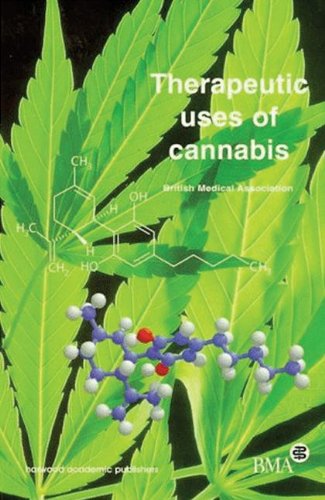 And this book is Therapeutic Uses of Cannabis by the British Medical Association.

This book by the BMA was the first one which listed a number of pathologies (only where there is scientific evidence) that could be responsive to cannabis therapy. This list ranges from vomiting and nausea caused by chemotherapy, muscular spasticity, a need for appetite stimulation and therapy against pain.

The final conclusion of the BMA study was absolutely favourable towards the use of therapeutic cannabis and this was the first time that such an authoritative medical body had pronounced so clearly in favour of the treatment. This scientific evaluation gave a significant boost to the whole debate and led to more detailed research into the subject of the endogen cannabinoid system. A huge quantity of research has accumulated over the last 20 years, much of which has not ended up in book form, particularly the research undertaken by the Italian group led by Vincenzo Di Marzo, an international leader in medicinal cannabis research. This group has demonstrated how the presence in our system of cannabinoid receptors and physiological mediators have the characteristics of a system that governs multiple physiological functions, from the control of the appetite, to the control of muscular mobility, from the control of pain, to the control of convulsions, all things which give significant rational support to the therapeutic use of cannabinoids.

There is still a great deal of resistance to therapeutic cannabis though.

People who are against the legalisation of medicinal cannabis are usually against the idea because they apply the prejudices that they hold toward cannabis as a recreational drug when evaluating cannabis as a medicine. Their stance is more political than scientific. From a scientific point of view, if you are against a particular therapy it is because you have weighed up the pros and cons in clinical tests and made a rational judgement about its efficacy.

Is there a negative side to this treatment?

The negative side effects of medicinal cannabis is a very delicate subject, especially when you are talking about using cannabis in psychiatric disorders, even though there are indications that it could be used in anti-anxiety therapy or as part of anti-psychotic treatment. The problem is that there is the potential danger that these symptoms could be accentuated rather than alleviated by the use of therapeutic cannabis. 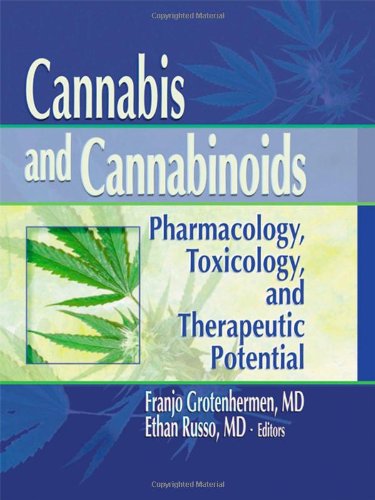 by Franjo Grotenhermen and Ethan Russo

My fourth book is Cannabis and Cannabinoids. I consider this to be the most comprehensive collection of studies and sources on the subject, a sort of bible for the debate that has been going for the last 20 years. That said, this book was written in 2002 and as this field is developing so fast – every month there are new results and discoveries – it is impossible to have a fully up-to-date book.

There is no country where medicinal cannabis is completely legal and readily available. There are quite a few countries in the world where you can get a supply of the medicine legally, in Holland for example, where medicinal cannabis can be obtained in chemists as it is produced under the auspices of the government. In other countries it is possible to find medicines that are derived from cannabis. In the USA, for example, Marinol can be obtained to cure the nausea and vomiting resulting from chemotherapy. This has been available since the late 80s. In the USA there is a paradoxical situation where on the one hand federal legislation, at least until the arrival of Obama, prosecuted users of medicinal cannabis in all its forms, but in more than ten states legislation has been passed that authorises the cultivation of cannabis for personal medicinal use.

Some friends of mine have visited California recently and they told me that with a doctor’s prescription there are about a dozen pharmacies which will sell you cannabis for medicinal use that is cultivated according to official standards.

Is medicinal cannabis different from the cannabis plant?

The main distinction between the synthetic medicine and the naturally derived medicine is the fact that the synthetic medicines are based on a single active ingredient (THC) and show a higher incidence of side effects when administered alone. The naturally derived medicine contains multiple active ingredients, in particular CPT, with the power to reduce the side effects, and prolong the medicine’s effectiveness.

Smoking the cannabis for medicinal purposes is not recommended, as the lighting of the cannabis releases harmful and cancerogenous substances that are damaging to the respiratory apparatus. I do not recommend that my patients ingest the medicine by smoking it; I tend to suggest that they use an inhalation device. 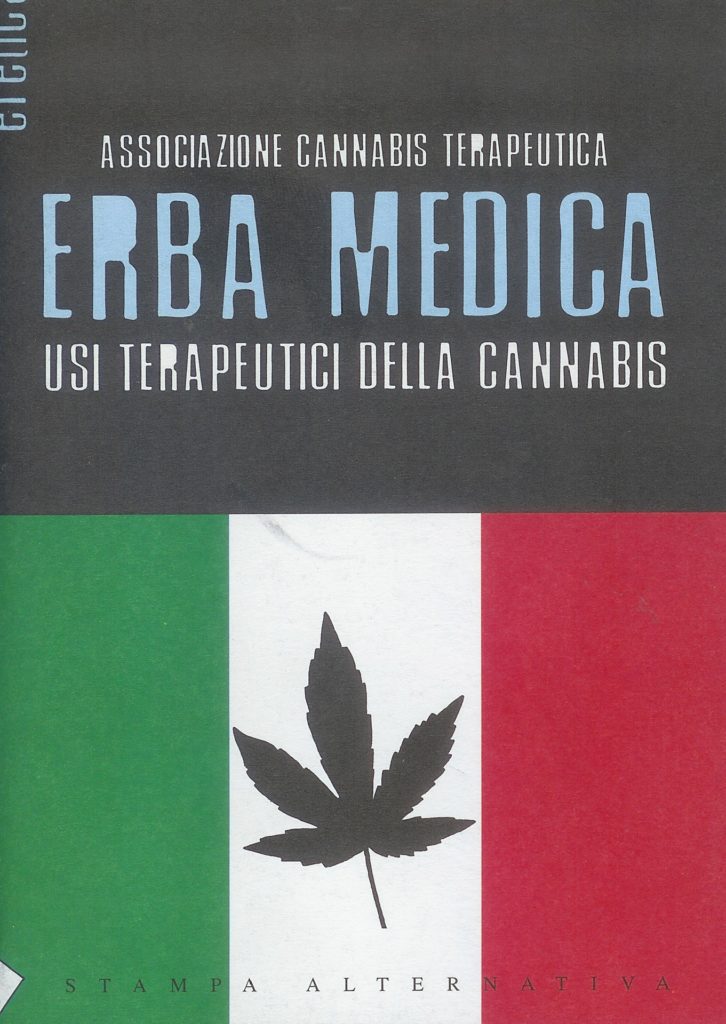 My last book was written collectively by the association of which I am a part: Erba Medica, by the Associazione Cannabis Terapeutica. The book is aimed at explaining the situation regarding medicinal cannabis in Italy in particular. The book contains medical information but also fully explains to patients what the legislative situation is in Italy and helps the patient through the complex bureaucratic process of importing the medicine from abroad, which is currently the only way for Italian patients to obtain therapeutic cannabis. There is currently no legal and registered medicinal cannabis available in Italy. Our association has managed over time to explain to patients their right to import medicinal cannabis from countries where it is freely available. This is usually Sativex from Canada or Bedrocan from Holland, or the old synthetic drugs like Marinol.

What illnesses that could benefit from medicinal cannabis?

The classic pathologies that I have already mentioned are the treatment of vomiting and nausea in chemotherapy; it can also be used as an appetite stimulant for AIDS patients, and in two important areas that have been identified in recent years. In the treatment of neuropathic pain, resulting from nerve damage, where traditional medication has proved to be inadequate, cannibanoids have been found to be more effective than morphine. The second is in the relief offered to those suffering from multiple sclerosis. There has been significant anecdotal evidence from MS sufferers that they have seen real benefits from taking cannabis medicines. We have entered a new phase of clinical trials for the medicine Sativex, and registration has been approved in Canada and soon in the UK, after further trials were requested. This means that Sativex should be available in Europe in the second half of this year.

Is medicinal cannabis a treatment of last resort?

Tato Grasso is a cardiologist in Palermo. He began being interested in the therapeutic uses of cannabis in the late 1990s, working on the ‘Libro Bianco sugli usi terapeutici della Cannabis’, presented to the former Italian Health Minister Umberto Veronesi. He is a founding partner of the Associazione Cannabis Terapeutica (ACT) and fellow of the International Association for Cannabis as Medicine (IACM). He is author of several publications on the therapeutic uses of cannabis and he has made frequent television and radio appearances to discuss this issue.

Louise Foxcroft on The History of Medicine and Addiction

Tato Grasso is a cardiologist in Palermo. He began being interested in the therapeutic uses of cannabis in the late 1990s, working on the ‘Libro Bianco sugli usi terapeutici della Cannabis’, presented to the former Italian Health Minister Umberto Veronesi. He is a founding partner of the Associazione Cannabis Terapeutica (ACT) and fellow of the International Association for Cannabis as Medicine (IACM). He is author of several publications on the therapeutic uses of cannabis and he has made frequent television and radio appearances to discuss this issue.