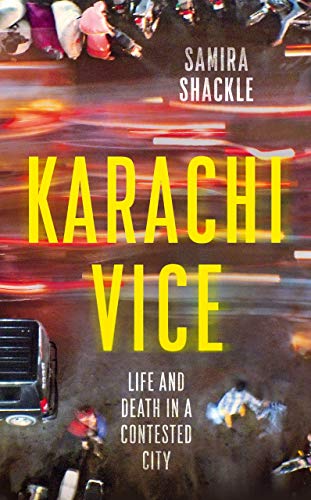 My book is about Karachi, a massive city in southern Pakistan, which has been home to various shades of urban conflict over the last few decades: ethnic conflict, political violence, terrorism, gang wars and organised crime. It’s a city that has expanded hugely quickly, and services including policing just haven’t kept pace. So it’s been a site of violence and upheaval.

My book tries to tell that story through a close account of five ordinary people’s lives. There’s a crime reporter, an ambulance driver, a young activist and teacher from an area very affected by gang war. There’s a mapmaker and a woman who lives on the outskirts in an area threatened by property developers. I focused on their experiences, and tried to fold the wider events in around that. I’ve been reporting on Karachi since 2011. So, a decade’s worth of work went into the book, in a way. The book tracks a period where the violence was spinning into a crescendo, up to 2014 when a police and army operation began and all these different elements were clamped down on.

The research process involved interviewing these people in a lot of detail and over a period of time, as long as five years for some of them. These were long conversations, returning to people after a few months to go back over things, asking for new details or about different parts of their life. It involved spending a lot of time with people, seeing them go about their daily business—sitting in their workplaces, homes or whatever, meeting the people around them.

I’ve drawn the majority of the book from their memories and how they recounted them. But I think when you spend a lot of time with people you get a real sense of their cadence and what they’re really like.

Inevitably, when you have reams of material—hours and hours of interviews done over the course of months—you have to shape it. I think it really helps to have spent enough time with people that you can feel confident that you are selecting the parts of their interviews that give a flavour of what they’re like as a person. You are trying to commit not just the events of their lives, but a sense of what they’re like to the page and to the reader. So that was my approach—just spending as much time with them as possible, so that when you do shape and select the facts, you do it with a measure of accuracy and fairness so that they themselves will read it and recognise themselves.