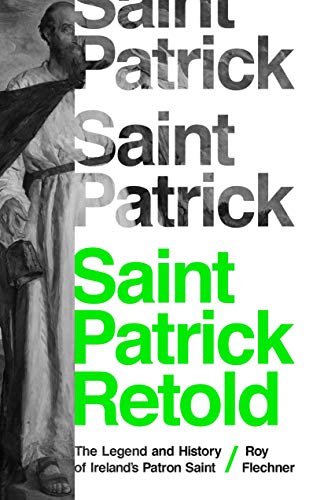 Who was St Patrick? Saint Patrick Retold, by historian Roy Flechner of University College Dublin, definitively answers that question. We’ve spoken to the author to find out more…

Having spent years living in America and observing the US fascination for St Patrick’s Day—even painting rivers green on March 17th—I’ve been wondering who St Patrick was for a while. When did he live? What is myth, what is reality? Did he really convert Ireland to Christianity singlehandedly? Or, even more implausibly, why do we think he rid Ireland of snakes?

In Saint Patrick Retold Roy Flechner answers all these questions. This is an academic book written for the general reader, and hits that sweet spot of being an easy read while cramming in a great deal of knowledge, about not only St Patrick, but the time in which he lived. I walked away knowing more about Late Roman Britain (the Romans left in 410, most likely during St Patrick’s lifetime, though his exact dates are unknown) and late Iron Age Ireland. I got a glimpse into the academic debate of whether Ireland was Celtic (apparently not).

I learned the origins of St Patrick’s shamrock link (“the earliest surviving records of the saintly connections to the plant go back to the 1680s.”) and other things we associate with St Patrick. The grassroots way in which St Patrick became a saint fits in nicely with what we learned about how ‘saints’ came to exist in our interview on the Saints with historian Simon Yarrow.

The book is just over 200 pages, but there are footnotes at the end of every chapter, so I found it a quick read. I listened to the audiobook, which also worked well. Yes, I feel I can say that after a pleasant few hours with this book, I can now face St Patrick’s Day feeling well-informed about the man who is being celebrated.

Q. Who was St Patrick? I was surprised in your book to find out that he wasn’t actually Irish.

Roy Flechner: Patrick was Irish by virtue of having eventually established himself there, but he wasn’t born in Ireland. He was born in Roman Britain. He was a member of what we call the Romano-British aristocracy, people who were thoroughly Romanized, although ethnically British (by British in this period we mean the indigenous population of Britain). Patrick was born to a father who was a deacon—so a member of the clergy—and his grandfather was a priest. So this is ostensibly a hereditary clerical family.

His father was also quite a high-ranking Roman official. We know they owned a townhouse. They also owned what is known in the technical jargon as a ‘villa,’ so a country estate. This is where Patrick says he was abducted from and taken to Ireland where, according to his testimony, he served as a captive for six years before fleeing back to Britain.

We can still read some of Patrick’s own writings, but I got the sense from your book that he’s quite a shadowy figure, isn’t he?

It is impossible to find out anything about Patrick except for what he says himself. There’s also what we might be able to infer about him by reading between the lines, in conjunction with other sources that don’t relate directly to him, or sometimes later sources and archaeology. But, to a large extent, we are dependent on Patrick’s testimony about his own life. We have a testimony that cannot be fully corroborated—and you can understand what the limitations of that are.

Nevertheless Patrick, in his own writing, does give us a glimpse into other narratives about his life. In one of the two texts that he wrote, referred to by scholars as the Confessio (the Confession), which is to a large extent autobiographical, Patrick tells us that not everybody believed his version of events when he said that he was abducted from Britain to serve as a slave in Ireland and then escaped back to Britain, later returning to Ireland eventually to become a bishop. Rather, his detractors say that he had left Britain of his own free will and, Patrick implies, for reasons of financial gain.

These are the accusations that haunted Patrick throughout his life, and are what the Confessio responds to and Patrick defends himself against. So even though we are restricted to what Patrick tells us, there is an undercurrent of another, rival narrative that Patrick lets us see a bit of, even though he doesn’t fully develop it.

And then the other source is his letter…

Yes, his “Letter to the Soldiers of Coroticus” is a letter of condemnation that Patrick writes against a British warlord by the name of Coroticus and his soldiers, who had taken captive some of the Irish men and women that Patrick had recently won over to Christianity and carried them off to Britain. So this was essentially a raid on Patrick’s converts in Ireland. Patrick berates Coroticus and his soldiers for doing that, and threatens them with excommunication. From this, we can infer the soldiers were in fact Christian, because you cannot effectively threaten anyone else with excommunication. We also learn that they self-identify as Roman citizens, even though this is likely to have been shortly after Britain ceased to be Roman. By then, the Roman colony had probably been extinct for a number of years, but people nonetheless still continued to identify themselves as Roman. Slaving seems to have been a common way of enriching yourself.

I know his exact dates are unclear, but basically St Patrick is alive at the time Roman Britain comes to an end in 410?

It is difficult to find any fixed date that we can attach to Patrick, but the fact that he describes his father as a Roman official of the rank of decurion suggests that Patrick lived, at least as a young man, at a time when the Roman administration in Britain was still very much active. Whether or not Patrick lived his entire life under Roman rule or just his early days, we don’t know. What we do know is that when the Romans finally leave Britain completely in 410, Britain experienced an accelerated wave of decline: political, administrative and economic.

The book is not entirely a fact-finding mission. Various historians have done that in the past and there is only a limited extent to which you can do that.

I’m definitely trying to add something more concrete in terms of the historical Patrick. I do that mainly by adding Roman legal sources and using them to interpret Patrick’s actions and trying to see in what ways Patrick’s story chimes with Roman law. And, surprisingly enough, it does. That then reveals certain facets of his biography that seem to have gone unnoticed before. For example, according to Roman law, Patrick would have had to inherit his father’s place on the town council. As a decurion, when a person gives up their position—as other historians have rightly argued that Patrick’s father had done in order to join the clergy—Patrick would have had to take his place. That might offer another motive Patrick had for leaving Britain. Certainly this might have been one of the things that his detractors would have held against him—he might have been perceived as failing his community by not serving as a Roman official as he was destined to, instead preferring to go off to Ireland to re-establish himself there.

Patrick was a saintly figure, a figure of veneration who had followers in the Middle Ages who shaped his image in the way that they wanted—and not just in Ireland. In Britain, for example, by the 10th century, Patrick is believed to have been the founding abbot of Glastonbury. He had pockets of veneration throughout Europe.

The book looks at how Patrick has been captured in the popular imagination since early modern times until 1916, when the book draws to a close with the second ever recorded St. Patrick’s Day Parade, which took place in Dublin just shortly before the Easter Rising in 1916.

Why is Saint Patrick’s Day celebrated on March 17th?

There’s no historical explanation. We do not know when Patrick died any more than we know when he was born. The Feast Day of St Patrick goes back to the early Middle Ages, but exactly why it was on March 17th and who established it, we don’t know.

“He came from the west coast of Britain. His family owned a Roman villa, so they were well-to-do. At the age of 16 he was abducted and taken as a captive to Co. Mayo, where he tended sheep.”

"Who was the real St Patrick: an evangelist or a tax dodger?"—Review by Mary Kenny in the Spectator, 16th March, 2019