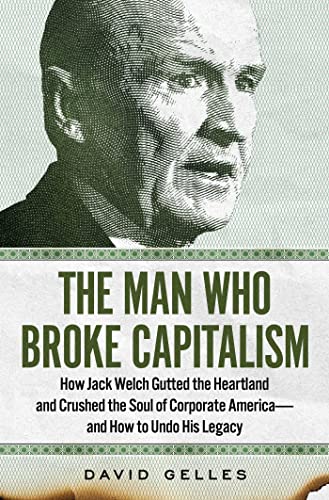 The Man Who Broke Capitalism: How Jack Welch Gutted the Heartland and Crushed the Soul of Corporate America—and How to Undo His Legacy

This is the biography of the legendary former CEO of General Electrics, Jack Welch. Welch was the great proponent of shareholder value based management—that is, that the management of a company should be focused on returning value to shareholders, not just above all other considerations, but to their exclusion. That meant outsourcing, offshoring, share buybacks among other things. Welch was taken up as a guru on both sides of the Atlantic, and the consequence has been, arguably, the industrial hollowing out of American and much of European capitalism, the vast disparities of pay between management and workers and a whole host of other problems with which we’re familiar.

Gelles puts Welch’s career in the broader story of the growth and evolution of US capitalism post-World War II and offers some ideas about how it could be reformed now.