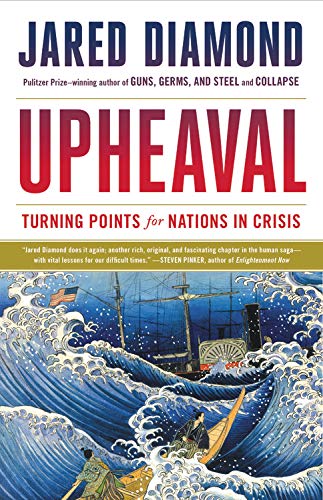 How do countries deal with crisis? In Upheaval the author, geographer and historian Jared Diamond examines how six countries he has lived in have dealt with crisis—and looks at the challenges facing his own country and current home, the United States.

Jared Diamond is one of our most recommended authors on Five Books,  with two of his previous books recommended multiple times in our interviews with experts: Collapse: How Societies Choose to Fail or Succeed (2005) and, of course, the Pulitzer Prize-winning Guns, Germs, and Steel: The Fates of Human Societies (1997).

Jared Diamond’s Gun, Germs and Steel was such a mind-blowing and worldview-changing book that it’s hard not to take a new book by the UCLA geography professor and polymath seriously. Now 81, Jared Diamond describes his latest book, Upheaval, as “an initial step in a program of comparative studies of national crises.”  What that means is that he looks at historical crises in six countries he knows well and tries to figure out what we can learn from them in terms of the current challenges facing the world.  If I were to boil it down further, and reduce it to one take-home or warning, I would say that in Upheaval Jared Diamond warns his fellow Americans that the US is so polarized at the moment that it could well go the way of Chile in the 1970s, with the country torn apart and the winning side brutally exterminating its opposition. Could this really happen? “The prospect still seems absurd to most Americans,” writes Jared Diamond in Upheaval but, “It would also have seemed absurd to my Chilean friends when I lived there in 1967…Yet it did happen in Chile in 1973.”

Jared Diamond structures Upheaval around various factors (12, to be precise) that impact how well a nation does in a crisis. As far as I can remember, he doesn’t use the word, but I suppose it’s about what gives a country ‘resilience.’ That particular term springs to mind, because in coming up with these factors, he relies heavily on ‘crisis therapy’ used to help individuals (even though he admits individuals and nations are not the same). Hence, just as the first step for anyone in crisis is recognizing they’ve got a problem, so Factor #1 for a nation is “national consensus that one’s nation is in crisis.”

The juxtaposition of personal and national crises is an interesting one, but the two don’t sit together super-easily. Take Factor #5, for example. At the country level, this involves “Using other nations as models of how to solve the problems.” Jared Diamond uses Japan’s Meiji Restoration as an example. From the humiliation of being forced to open up by American gunboat diplomacy in 1853, Japan went on to defeat Russia in war and dominate the Asia-Pacific by selectively copying what other countries were doing. There was no need to reinvent the wheel. This is a compelling point, and Jared Diamond rightly points out that part of the problem the US faces is belief in its own exceptionalism, so that, for example, the country continues to struggle with providing universal health care—when the various models of how to do so successfully are already out there: indeed every other country in the OECD, including Turkey and Mexico, already have universal healthcare in place.

On the personal level, however, Factor #5 translates into “Other People as Models.” Jared Diamond advises turning to friends who have “weathered a similar crisis” for help, and failing that, turning to biographies of inspiring people like (say) Nelson Mandela or Eleanor Roosevelt. Perhaps I am being harsh, but I don’t feel these two components of Factor #5 enhance each other in an eye-opening way.

But it’s the concept of crisis at the centre of Upheaval that I struggle with most. To cut to the chase: one of the countries he looks at is Australia, one of the least crisis-ridden countries I can think of. Of course all countries (like all human beings) face challenges, but at what point can we really call something a crisis? Upheaval tries to define it but doesn’t succeed, in my view. Or perhaps it’s just too broad and subjective a term to be useful. In short, I have issues with the analytical framework of the book. This is not entirely surprising. As Jared Diamond says at the beginning of Upheaval, what ties together the 7 countries he’s looking at is that he happens to have lived in six of them, and knows a lot about the other one (Japan) by marriage. As a research proposal, that’s not going to get you a place on a political science PhD programme.

But, at the end of the day, the author of Upheaval is not an aspiring grad student but Jared Diamond. Just hearing his observations on the countries he’s lived in and the challenges they’ve faced is fascinating. By its randomness, you also get a wonderful glimpse of important, angst-ridden events in the history of countries that you may not know much about: Australia, Chile, Japan, Finland, Indonesia and Germany. They are all compelling stories, and you learn a lot about each country by reading them. Plus there are really memorable photos—from a wistful picture of the Chilean folk singer Victor Jara (who had all his fingers chopped off before being shot 44 times by Pinochet’s military junta) to a photo of a crowd in Australia (illustrating “Australia’s overwhelmingly white population in the mid-1900s”)

Jared Diamond’s writing is highly readable and adding personal, autobiographical elements makes it more so: you are seeing the world through his eyes, while also learning more about him and his life. He started grad school as a physiologist doing gallbladder research. He picks up languages very easily. His first wife left him. His parents helped him through the first professional crisis of his life.

There is much wisdom throughout the book. Near the beginning of Upheaval, Jared Diamond reminds us that the Chinese word for crisis, ‘wei-ji’, combines the character for ‘danger’ with that of ‘opportunity.’ It’s a point that’s easy to forget as, here in the UK, I slouch on the sofa every night to watch the latest installment of the Brexit debacle on the news. Rather than feeling dispirited, how much more constructive it would be to see the Brexit crisis as an opportunity to address some longstanding issues in British politics and society. Perhaps the personal and the national do need to be more closely combined in the way we approach the world.

Other books by Jared Diamond 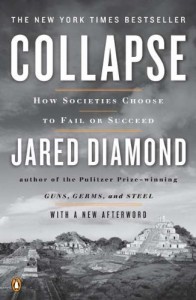 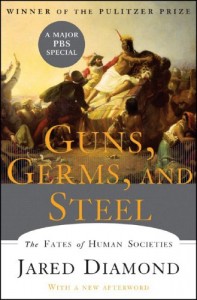