The best books on Anti-Semitism 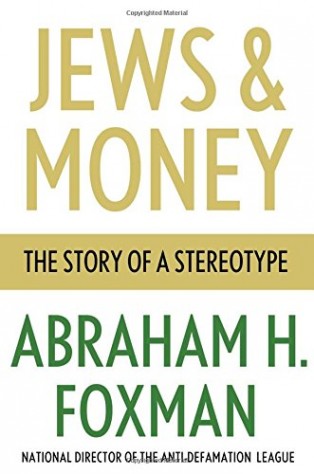 Why has anti-Semitism been such a problem down the ages, and why does it persist today? The emeritus director of the Anti-Defamation League, Abraham Foxman, recommends the best books to better understand anti-Semitism. 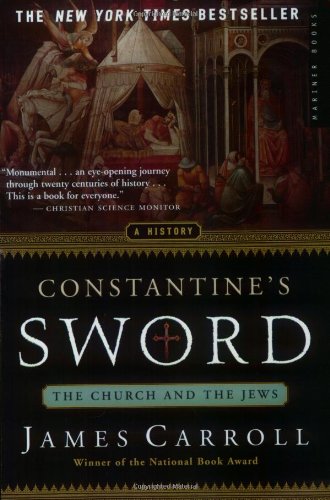 I gave you five books. I didn’t necessarily rank them in order of importance. If you asked me then the number one for me would be Constantine’s Sword. Anti-Semitism in Western civilisation was unfortunately grounded in religion, in Christianity, and that legitimised it and that gave it an OK, so Constantine’s Sword is, I would say, the most authoritative history, by a former Jesuit priest, as to the antecedents, the roots of anti-Semitism in Western society. I would consider that it’s the most significant book if you want to understand the essence of why and how it spread. It’s a big book.

Can you give me a picture of what that essence is?

The roots of Western anti-Semitism, going back to Christianity, is the charge of deicide – that the Jews, not the Romans, crucified Jesus, and therefore if the Jews killed the Lord then it’s OK to do whatever it is with them unless they convert. So you had expulsions, you had the Inquisition, and therefore everything was legitimate.

The reason I wrote my book, Jews and Money, was that it’s the other side of the coin in the roots of Christianity in terms of anti-Semitism. That’s the greed. Why is there such a preoccupation in anti-Semitism about Jews and money? That’s because when you go back to deicide, the other side of it is that Judas sold out Jesus not for theology but for 30 pieces of silver. So that becomes another fundamental basis for anti-Semitism: ‘The Jews are greedy, they’ll do anything for money, even sell out the Lord.’

When were the first expulsions and forced conversions?

Well, in Britain, York was the first one, in 1190. The conversions were in Spain with the Inquisition, when those who wouldn’t convert fled or were expelled or were burnt at the stake. In the Middle Ages you have all kinds of issues. Jews were blamed for the Plague, for example. So there wasn’t one version, but the most significant basis for anti-Semitism stems from the teachings of Christianity. That’s why the book is important and why what the Vatican did 45 years ago in Vatican II by Pope Paul, which was to, not forgive, but to remove the blame for the crucifixion from the Jews, was probably the most important modern-day message relating to anti-Semitism and the Christian church. 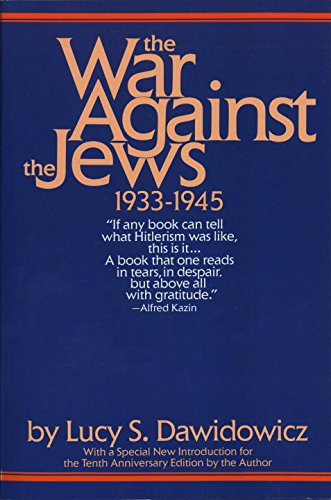 The War Against the Jews

Tell me about The War Against the Jews. 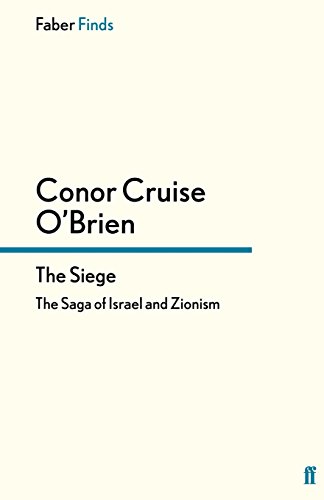 When you talk about history books, I’d say that Anthony Julius’s book is the best on the list – the Wistrich is more detailed and more specific but Julius’s book is specifically England. England was important in the English-speaking world in terms of the Empire, and what happened there impacted the rest of the world. That’s why he’s one of my five because in order to understand anti-Semitism in the English-speaking world you need to understand its growth and development in the UK. 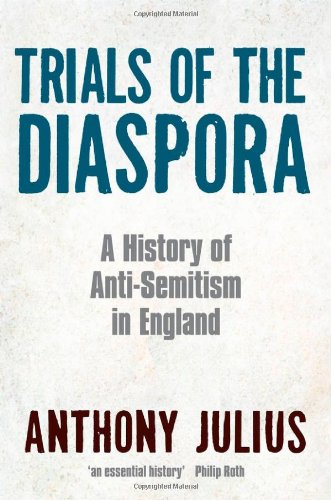 Trials of the Diaspora

The reason I put in the Conor Cruise O’ Brien book is that so much of the modern day, new anti-Semitism related to Israel – criticism of Israel. It’s been said recently that Israel has become the Jew among nations, that a double standard has been applied to it, so I think it’s very important, in order to understand how anti-Semitism morphs into the political arena, that one understands the establishment of the state of Israel, the saga of Israel and Zionism. Of all the books on Israel and the Middle East, for me, Conor Cruise O’Brien’s book is a classic. So, this is not about anti-Semitism but it will inoculate a lot of people against the anti-Semitism which morphs out of the anti-Israel/anti-Zionism.

I would say that Israel is a democracy. You can criticise its policies. There is more criticism of Israel’s policies within Israel per square kilometre than any place I know of in the world. So, it’s not a question of not criticising the government. My question is when somebody applies a certain standard only to Israel, I would ask: ‘Why aren’t you applying the same standard to Saudi Arabia, to China, to Cuba, to Rwanda?’ If it’s only setting a standard for Israel that is not set for anywhere else, that’s anti-Semitism. On the issue of anti-Zionism, Zionism is the national liberation movement of the Jewish people. Now there are some people who are opposed to nationalism. So, if you are opposed to nationalism and you don’t like British, American or Palestinian nationalism, then it’s OK for you not to like Jewish nationalism. But if the only nationalism that bothers you is Jewish nationalism then you’re an anti-Semite. If in your mind Jews are the only people in the world who have no right to self-determination, to want their own home, their own state, their own flag – that’s racist. You’re a bigot.

I just want to go back to the Lucy Dawidowicz. Is this a history that focuses mainly on the Holocaust? Can you think of any anecdote that makes the book stand out?

The Holocaust for me is not something that’s anecdotal. The history of anti-Semitism is cumulative and the worst of it was the Holocaust. If you notice, I did not pick a book on the Holocaust and there are a lot. But the only way you can understand the Holocaust is to understand the history of anti-Semitism, rather than looking at what happened in the Holocaust. There are a lot of books on Nazism and anti-Semitism in Nazism but I think it’s more important to know where it came from, what were its antecedents, and for me Wistrich and Julius and Dawidowicz do that. I would say read all of them. With Dawidowicz it’s the way she writes. She’s analytical, sharp, insightful and she makes it relevant to modern times.

I’d like to hear about the history of anti-Semitism in Britain. A 65-year-old rabbi in London told me that things were worse now than he could ever remember, and he was telling his children and their children not to wear their yarmulkes to and from school for the first time in his life.

It’s not only in London, it’s the whole of Europe. It started in 2000; that’s when people started talking about the new anti-Semitism, linked to criticism and attacks relating to Israel. In Europe it’s rife. There are two more elements. One is the internet, which has spread anti-Semitism and even legitimised it because it’s an instrument of knowledge, and the other element is the growth of Arab Muslim communities, many of them fundamentalist and anti-Semitic, and they act as a human conveyor belt of the anti-Semitism of the Middle East. Anti-Semitism in the Muslim world in the Middle East is horrendous. It’s horrific. It only matches the rhetoric of Nazism, the cartoons, the books. That’s being brought to Europe on the conveyor belt of the fundamentalist imams. So, much of the anti-Semitism is expressed through them.

In Paris a young Jewish man, Ilan Halimi, was abducted for money, because all Jews have money, and killed. The kidnappers had been fed this anti-Semitism and it’s in the streets. The Chief Rabbi of France also advised Jews not to walk in the streets in yarmulkes. Spain is bad, Poland is bad, Norway is bad. The UK is unfortunately among the places where there are more anti-Semitic acts than in many other places. But the FBI just issued a report in the US saying that there are ten times as many attacks now against Jews than there are against Muslims. This is in the United States. We think we’re better but we’re not immune. Here too there are significant anti-Semitic public manifestations. 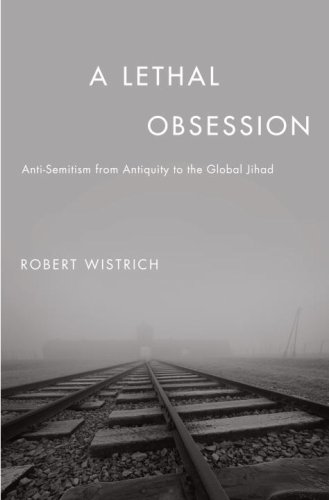 Tell me about Wistrich.

He’s one of the great historians of anti-Semitism. It is a heavy big book, scholarly, footnoted – several hundred pages of footnotes. It will be a classic for a long time, a book of reference. It’s probably a book one should consult. It’s hard to sit down and read it from cover to cover, although if one does one can become an expert in anti-Semitism. It will stand the test of time as the tome of history, and he brings it up to modern day times in terms of global jihad and attacks on the Jewish people. This book will be recommended as the best book on anti-Semitism in ten years’ time.

Abraham Foxman is an American lawyer who is National Director Emeritus of the Anti-Defamation League. In March 2016, he became head of the Center for the Study of Anti-Semitism at the Museum of Jewish Heritage in New York City.

Nicholas King on The Bible

Dara Horn on The Best Books for Hanukkah

Abraham Foxman is an American lawyer who is National Director Emeritus of the Anti-Defamation League. In March 2016, he became head of the Center for the Study of Anti-Semitism at the Museum of Jewish Heritage in New York City. 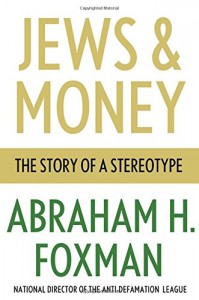 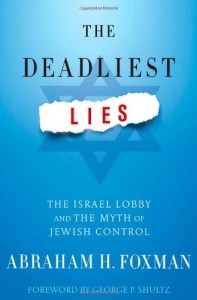 The Deadliest Lies
by Abraham Foxman 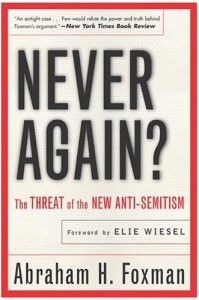 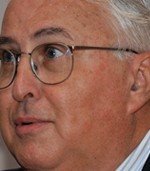