The best books on British Cinema

The editor of the Encyclopaedia of British Film talks about Britain's cinematic offerings. ‘I love Brief Encounter – I cry from the moment Celia Johnson speaks until the credits come up at the end.'

Your first recommendation, Realism and Tinsel, takes us back to the glorious 40s. Robert Murphy thinks that popular films in the 40s were not critically fêted, but provided a sense of feel-good entertainment to the masses. Is that a fair assessment of film in the 40s?

I think he finds a lot more than that in them, really. I have a special fondness for this book. This was written exactly 20 years ago, and looking through it recently I’m still impressed at how it brings to life so many films that were important to me, that I never read anything much about. I particularly enjoy it because it goes beyond the conventional admiration for the films that had made British cinema famous in the postwar years. The critic John Ellis used the phrase “the quality film adventure” of British cinema in the postwar period, from the mid 40s to the end. Those films are still remarkable, and I suppose they are the films that made British cinema internationally known, perhaps for the first time. Robert Murphy is very good on the peaks, like Brief Encounter. I love Brief Encounter – I cry from the moment Celia Johnson speaks until the credits come up at the end. And I love Great Expectations; it’s a wonderful film, everyone knows that, and these have been written about at great length. What Robert Murphy does is to ferret around in less respectable areas to give a more comprehensive sense of what was going on. Some of his chapter headings will suggest to you what I mean: “Exotic Dreams”, “The Spiv Cycle”, “Morbid Burrowings”… 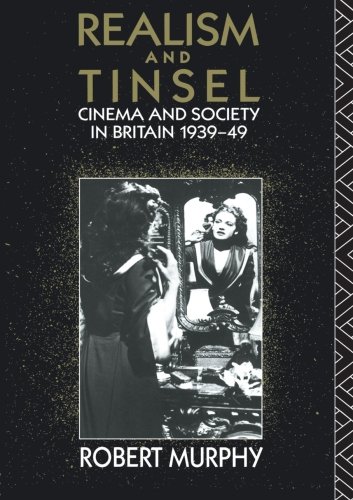 He also talks about the psychic reality of melodrama – films turned out by Gainsborough Studios between 1943-46, with names like The Man in Grey and Madonna of the Seven Moons.

What is serious about them is the way they depict women, women’s desires and what was open to them. Robert Murphy and others realized that these films were crucial in what they had to say about British society at a particular time. They were written off absolutely by the critics at the time, who wanted realism and discreet literary adaptation. Murphy describes a scene in Love Story – where Stewart Granger is going blind and Margaret Lockwood has an incurable disease – as “emotionally satisfying without needing to be realistic”. These films are not realistic in mirroring the social reality out of which they grow, but there’s an emotional truth in them. I was prepared to be quite snooty about these films until I read Robert Murphy. 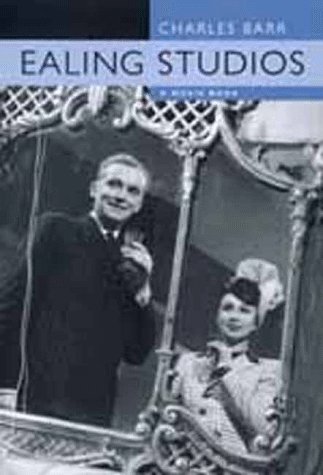 Your next recommendation is Ealing Studios by Charles Barr. What’s the draw of this book?

This, to me, is one of the three best books ever written about British cinema. As far as I’m concerned, writing about studios will never be the same again, and anyone who hasn’t read this book should not be writing about studios. Barr understands the way the studio functioned, and is appreciative of what it achieved but not at all sentimental about it. He’s excellently alert to the limitations of its Little England world view. One of the tics that you come across in criticism is people saying, “It’s very sub-Ealing”, even if (a) they weren’t alive when Ealing was going and (b) wouldn’t know an Ealing film if it hit them over the head. All they mean is that some small business is threatened by a big conglomerate and wins over it in the end – that’s all they have to say about Ealing.

Barr’s book makes it clear that there is a great deal more to be said. He makes a clear discrimination between its excellent major achievements, films like Kind Hearts and Coronets, It Always Rains on Sunday, Mandy and other gentler fare. This is a book which, with great assurance and confidence – as a result of knowing the films inside out and having done immaculate research – is capable of the sorts of discriminations we would all die to be able to make. I think Ealing, especially for comedy, holds a special place in the affections of filmgoers. But some of the films really require a tougher response and Barr gives them this. 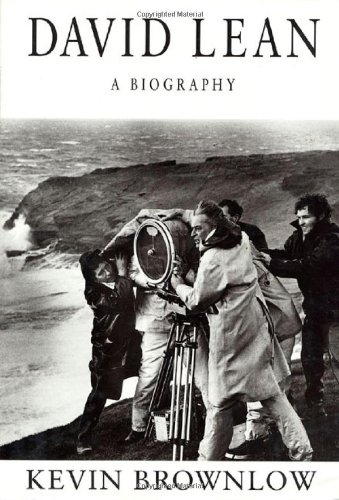 The next book you’ve recommended is David Lean by Kevin Brownlow. What is it about this book that makes it such a great portrait of the director?

For my money, this is quite simply the best biography of a filmmaker I’ve ever read. It’s an entirely – all 750 pages – enthralling account of a man enraptured by cinema, written by another man enraptured by cinema. The information in it is staggering – Lean’s own story, with the history of British cinema interwoven. Kevin Brownlow, it seems to me, has talked to everybody who ever worked with Lean and the groundbreaking aspect of the book is in its astonishing reliance on written testimony. The result is the most wonderful sense of an endless series of close-ups of the man in action. This is not hagiography either. Brownlow clearly admires the films and he knows exactly how much to give us about them, and he does deal with the man’s limitations and unattractive qualities.

Personally, I don’t care if I never see any Lean film after 1958 again. I haven’t got enough life left to spend trudging through snow or sand or sea spray. Brownlow makes me wonder if I haven’t been a bit impetuous in my dismissal of these later films. I don’t care for the epics, but he makes me feel I need to think again about them. It is, without a shred of doubt, the very greatest biography of anyone ever in film. Quite a large claim, isn’t it? 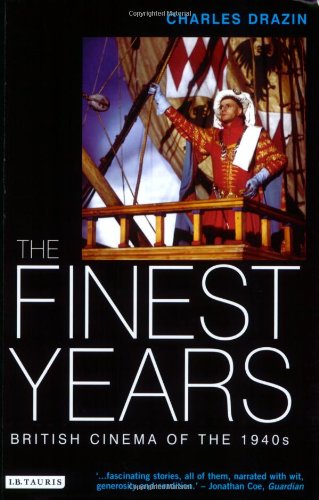 Certainly is. Let’s talk about The Finest Years. Quite a grand title.

It’s a very handsome-looking book as well, featuring Olivier as Henry V on the cover. It came out in 1998 and is one of the most enjoyable books in British cinema. It combines masses of interesting information with total readability. I think it’s valuable both to scholars and laymen who just want to know more about how British cinema’s finest years came about. The subtitle is British cinema through the 1940s but this is not a critical plod through the decade. He’s tracked down a remarkable numbers of the prime movers and shakers of those years. There’s a chapter, for instance, on David Lean and Carol Reed, where he manages to have fresh things to say, for example, about Lean’s Brief Encounter or Reed’s great 40s trilogy, The Fallen Idol, Odd Man Out and The Third Man.

You can’t think about the 40s without big names like Lean and Reed, but even more rewarding are the chapters on people like the Rank Organization’s notorious hatchetman John Davis, who was much dreaded by everybody. Drazin talks about the tragic figure of Robert Hamer, whose demons included alcoholism – he made Kind Hearts and Coronets and It Always Rains on Sunday. He writes about Gabriel Pascal, the somewhat mad Hungarian to whom George Bernard Shaw sold the rights to all his plays for a guinea. It’s a marvellous line-up of people that he’s got. It’s not critical writing, it’s evocative writing and I don’t know any other book that evokes the period as well as this does. 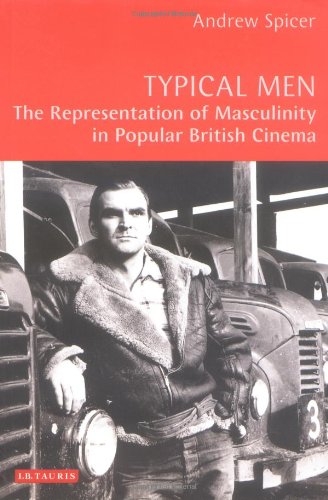 This book is indispensable. It establishes the range of male types that Spicer has identified as prevailing at various periods in British cinema. He uses terms like “the action hero” – people like Laurence Olivier and Stewart Granger; “the common man” – David Niven, Eric Portman; “the boy next door”, “the Byronic male”, and so on. He sets up his theoretical framework with reference to Foucault’s concept of gender as “cultural performance”. When I read that, I thought this is going to be a heavily theoretical book, but it is done so deftly that no one need feel daunted by it. What emerges are the ways in which the changing patterns of male stars reflect or comment on society. For example, the pre-war gentleman-adventurer types were displaced by the emergence of an everyman hero after the war, in what was, I suppose, meant to be the egalitarian postwar period. Right up to the more recent phenomenon of male insecurities, as in The Full Monty. I always like the remark that “these men had nothing to lose but their underpants”. This book has an overall sense of films happening in an ever-changing social context. It’s written with precision and elegance and it’s the result of the most immaculate research and argument. I strongly recommend it.

Brian McFarlane is a leading academic on film and the writer and editor of The Encyclopedia of British Film. He is Honorary Associate Professor at Melbourne’s Monash University and Visiting Professor at the University of Hull. He is a film critic and a regular contributor to publications such as the Australian Book Review. He is also a fellow of the Australian Humanities Academy and was awarded the Australian government’s Centenary Medal for services to the arts and literature in 2003.

Brian McFarlane is a leading academic on film and the writer and editor of The Encyclopedia of British Film. He is Honorary Associate Professor at Melbourne’s Monash University and Visiting Professor at the University of Hull. He is a film critic and a regular contributor to publications such as the Australian Book Review. He is also a fellow of the Australian Humanities Academy and was awarded the Australian government’s Centenary Medal for services to the arts and literature in 2003. 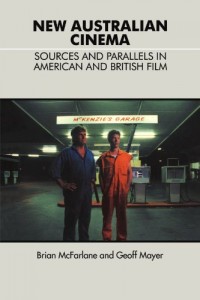 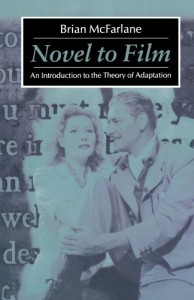 Novel to Film
by Brian McFarlane 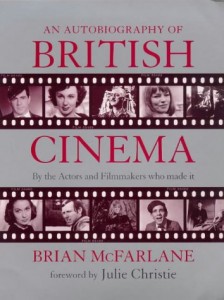 An Autobiography of British Cinema
by Brian McFarlane 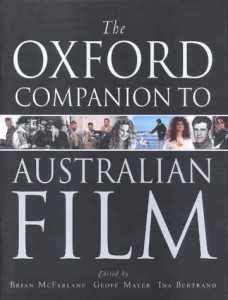