The best books on Espionage 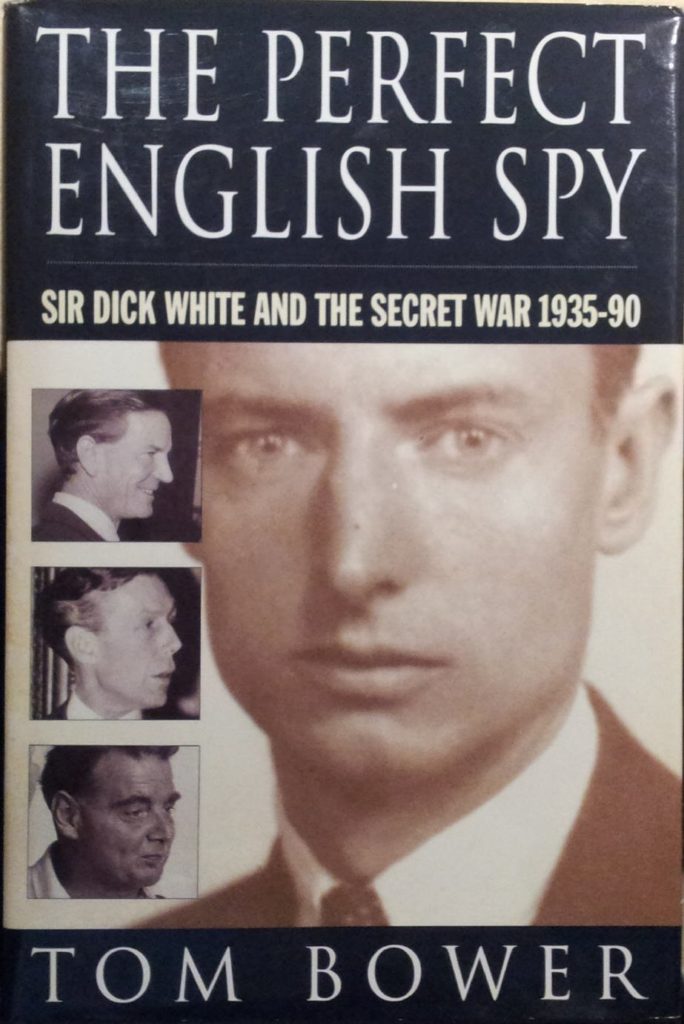 When you started out as an author, you weren’t initially planning to write about espionage. So why spies?

When I was 25 I was approached for a job by MI6. The experience that I had – which was brief but extremely interesting – was crying out to be dramatised. I had always wanted to write a novel, but up to that point I didn’t have a subject, I didn’t have a story.

Suddenly I had this thing fall into my lap. The first third of that first book [A Spy By Nature] is more or less an autobiographical account of what happened to me; the last two thirds, which is about industrial espionage in the oil business, is completely fictitious.

You must have had to do a lot of research. The first book you’ve chosen, The Perfect English Spy by Tom Bower, is a rather detailed biography. Was this a starting point?

That was a key part of the research for A Spy by Nature. Bower’s book is a biography of Sir Dick White, who was the head of MI5 between 1953 and 1956 and of SIS [MI6] between 1956 and 1968. In other words, right the way through the trauma of the Cambridge spies: Old Etonians, gentlemen, hoodwinking the Establishment.

What I was really interested in when I was starting A Spy by Nature was this notion of treachery. Do people in my generation still have that sense of loyalty to Queen and Country? Is there still a state to betray, a sense of patriotism in our blood? 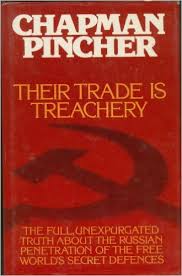 Their Trade is Treachery

The Chapman Pincher book, Their Trade is Treachery, is another nonfiction recommendation.

Chapman Pincher is about 95, still alive, and has been a thorn in the side of the Establishment throughout his long career as a journalist. In the early 1980s, he published Their Trade is Treachery in which he alleged that Sir Roger Hollis, who had been the head of MI5, was a Soviet agent. The book caused a great scandal when it was published. Most of Pincher’s information came from a man called Peter Wright, who wrote Spycatcher. Wright now has something of a reputation as a paranoid fantasist.

The recent official history of MI5, compiled by Professor Christopher Andrew, categorically states that Hollis was not in the pay of the Russians, but I think we’re never likely to know the truth, one way or another. The great problem about writing about spying – and this applies as much to fiction as it does to nonfiction – is that nobody has access to ‘the truth’. It’s a wilderness of mirrors, to use a well-worn phrase.

Why do you think people are so fascinated by spies?

For the same reason that they are interested in TV series about doctors and cops. These are perceived as glamorous, mysterious professions in which dramatic things happen all the time. Most people live pretty mundane lives, work in fairly mundane jobs: they don’t save lives, chase bad guys down the street, run agents behind enemy lines.

The fascination with spying also has something to do with James Bond. People grew up with the James Bond movies, so they think all spies carry gadgets and sleep with beautiful women, fly first class everywhere and eat anchovies on toast for breakfast.

I also believe that people have different masks, different faces that they put on, and there’s something in spy fiction that accesses that private, secret part of ourselves. The world of espionage fiction, with its lies and manipulations, is not so far removed from the lies and manipulations we are all guilty of, to a greater or lesser extent, in our own lives.

You’ve said that spying is not a glamorous career option. Presumably it has plenty of downsides – feelings of paranoia feature heavily in your books.

Did I say that? Somebody who was working for one of the intelligence agencies was helping me with the detail for one of my books and we happened to go to a football game. I tell this story only because it helps to illustrate how a professional intelligence officer thinks. I have a bad back – I’m 6ft 6in. About halfway through the game, I stood up and tilted backwards, to free the tension in my spine. My friend turned to me and said: ‘Are you sending a signal?’ Obviously she was joking, but that’s what jumped into her mind – there is no such thing a normal, ordinary behaviour in the mind of a spy. Everything has a double meaning. 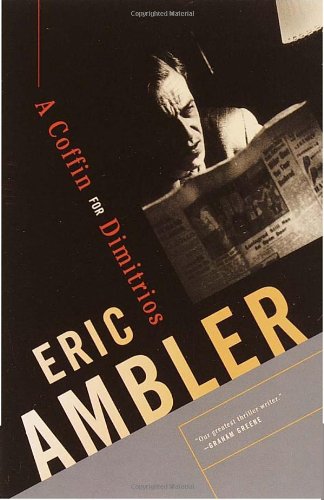 A Coffin for Dimitrios

Your next choices are both fiction. You’ve chosen a novel by John le Carré and one from Eric Ambler, real big guns of the spy-fiction world.

Eric Ambler is the grandfather of the serious spy novel.

By which you mean no martinis, no gadgets?

Exactly. Broadly speaking, there are two schools of spy novel: the Ian Fleming, Robert Ludlum school, which is purely escapist and highly entertaining, full of guns and gadgets and fast women; and then there’s the more serious, literary strand, which is interested in character and behaviour as much as in story.

Ambler was the same generation as Graham Greene, and he was, like a lot of educated people at that time, a kind of proto-Marxist, a socialist. He believed that he could use the thriller not only to entertain but also as a political tool, to say something about the state of the nation.

Then Le Carré picks up that ball and runs with it, and takes the idea of the serious spy novel to another level – partly because Ambler had laid the groundwork and partly because Le Carré is an infinitely more gifted writer who was fortunate enough to have the Cold War as his canvas. 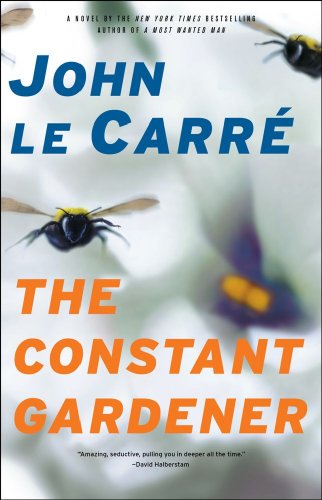 Why did you choose The Constant Gardener? It’s not overtly a spy novel.

There is actually only one spy in The Constant Gardener, an MI6 officer in Kenya, who I think at one point is involved with Quayle, the lead character, because he needs a piece of information about his dead wife.

I chose it simply because it was a huge influence on Typhoon [Cumming’s latest novel]. The idea of having a thriller that was also a love story, and then the political dimension as well. In The Constant Gardener, Le Carré is having a go at big pharmaceutical companies which are testing products on people in Africa. In Typhoon I was trying to let people know what is going on in terms of human rights abuses in Xinjiang, the Uighur Muslim province in Northwest China.

Having said all that, the most important thing that I can do is to keep people reading the books that I write – to entertain them and interest them in the characters I have created. Writers shouldn’t be preachy. But if at the same time I can add a layer of political commitment to my books, or whatever you want to call it, then that’s a laudable goal, as far as I’m concerned. 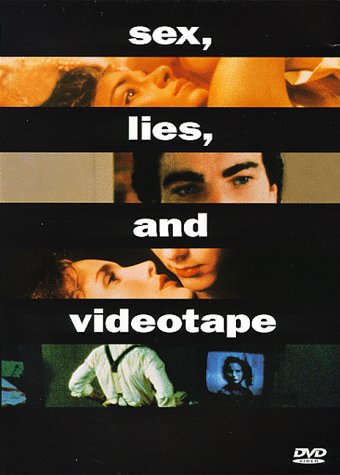 I was puzzled by your final choice, sex, lies and videotape.

The story of sex, lies and videotape is the story of a marriage between a lawyer, who is having an affair with his wife’s sister, a savvy, sassy barmaid, and his rather straitlaced, you might say frigid, wife, played by Andy MacDowell. And into their lives comes a character played by James Spader, an old university friend of the husband. It’s at least ten years since they were at college. Spader’s character has changed a great deal in that time and has rejected corporate, bourgeois suburban life. He’s also impotent. He gets his kicks by winning the trust of women – he’s very honest about who he is and what his problem is – and getting them to talk about their sex lives on camera. It sounds like the seediest film, but it works, principally because all the characters – with the exception of the husband – are sympathetic. Damaged and strange, but sympathetic. That in itself is an achievement.

For a reason that I can’t quite isolate, the film had a big creative impact on me when I was very young. The only point in the movie in which anyone is really honest is when the women are on camera, talking about their sex lives. The rest of the time everybody is lying to everybody. And there was something else – something about the way that the characters talked, or the mood of the film…it was just very different to anything I’d seen before. I really believe that the books and movies that a writer is exposed to between the ages of, say, 16 and 23 are vitally important to their later development.

After I was interviewed by MI6, I wrote A Spy By Nature because I was thinking about what would happen to me if I had done that job. What effect would it have had on my relationships with my girlfriend, with my family, my friends? I would have gone into a parallel life, a pretty complicated and difficult to manage parallel life. And something of the tone of that novel is echoed in sex, lies… I watched it again the other day and the parallels were striking.

Stephen Bush on The Best Politics Books of 2018

Peter W. Galbraith on The Kurds 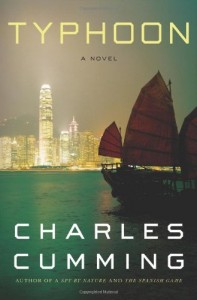 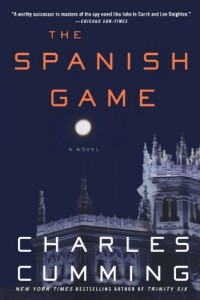 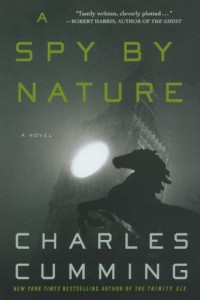 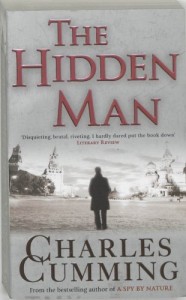 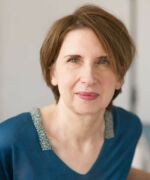 Every year the judges of the Baillie Gifford Prize pick out the very best nonfiction books, the shortlist they come up with a brilliant way to find gripping books to immerse yourself in. Here cultural historian Kathryn Hughes, one of this year's judges, talks us through the six books they chose for the 2021 shortlist, books that will draw you in, whatever the subject.