The best books on Cricket

What are the best books about cricket? In 2011 Test Match Special's Daniel Norcross gave an interview about his favourite books on cricket. At the time, he was running an irreverent, uncensored and partial cricket commentary service, Test Match Sofa.

Well, at the moment there’s only one way you can get cricket commentary and that’s through a state broadcaster, who is constrained by good manners. We, on the other hand, can say what we like about who we like.

So you don’t do polite cricket?

These aren’t just my choices; I’ve asked some of the other commentators as well. I’ve discarded four out of five from one commentator, but almost everybody agreed on one book, which is Beyond A Boundary by C L R James.

The boundary being some sort of metaphor?

A social metaphor. When cricket writing started it encouraged a lot of upper middle-class snobs to say rather twee things about how charming it was that blacksmiths were bowlers and people who didn’t have to work always batted at number four: a series of tedious stereotypes somewhat reminiscent of Lytton Strachey’s Eminent Victorians.

I was brought up with that tradition, but also at a time when the West Indies were murdering Britain, and these wonderfully athletic, lithe black men were smashing the shit out of a load of public school boys, a spectacle that didn’t square at all with Lytton Strachey or Neville Cardus or E W Swanton.

It’s probably the most famous cricket book of all time, written in 1963, and in it, the most beautiful quote: ‘What do they know of cricket who only cricket know?’ It’s a quote that encapsulates everything that’s important about life and, of course, cricket, because cricket’s full of people who know nothing else, statisticians and bores…

What’s far more important are the things that James is writing about. He’s a Trinidadian, born at the turn of the century, just as Trinidad is being decolonised; slavery’s gone, the country’s experiencing this hang-over from the Empire. There are still cricket clubs based on the colour of your skin.

Reflecting the imperial politics of cricket?

Imperial politics and cricket are inseparable. It’s the sport of Empire and, unlike other sports, it’s extremely limited in its range of interested countries. It just so happens that those countries are enormously influential: England, Pakistan, India – over a billion people there – Sri Lanka, Bangladesh, New Zealand, Zimbabwe, South Africa, Australia and all the Caribbean islands.

Why is James so keen on the sport of the oppressor?

James is a Trotskyite. He’s talking about cricket as a vehicle for political representation, where the team is a kind of Marxist collective, with each member performing a different role in the group. And that’s particularly relevant to a team like the West Indies, made up from a group of independent countries, but discovering its identity through this kind of co-operative: a spin bowler from St Lucia, a wicketkeeper from Trinidad, a batsman from Barbados. They all have equal importance while being totally different, and on the cricket field, too, you can be equal to the white man who has controlled your society.

A book about liberation through sport?

And so learned. Get this: ‘T S Eliot is of special value to me, in that in him I find, more often than elsewhere and beautifully and precisely stated, things to which I am completely opposed.’ 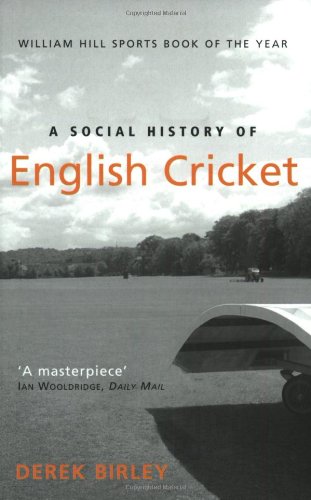 A Social History Of English Cricket

A Social History of English Cricket. Derek Birley points out a series of very interesting facts, not in a dry way but in a very easy to read way, starting with the fact that cricket began as a betting game in which one aristocrat would bet another that he could score more runs with the aristocrats doing the batting and the servants doing all the bowling. They’d place huge sums on the result.

It was also a game which divided the gentleman amateur from the paid professional. The gents would go out to play from one door, and the professionals from another. They’d approach the wicket from a different gate, and each side would have both gents and professionals. Except that when a celebrity amateur like Dr W G Grace appeared he was not, of course, playing for free. He’d get appearance fees and he’d be put up in lovely hotels.

It’s such a brilliant read. It takes you through all the main blow-ups of cricket – the Bodyline series, the South African crisis – and on the way there are lots of cursory asides, not doctrinaire. not done with malice, but gentle academic dismissals of cretinous fat boys through English history. 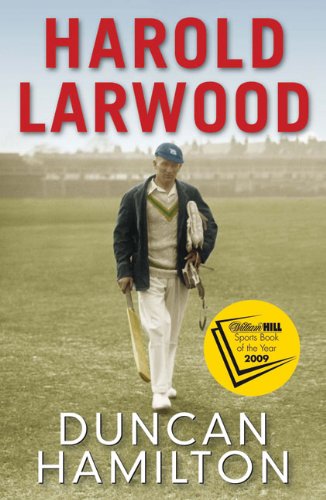 The single most exciting moment in English cricket was almost certainly the Bodyline series of 1932-33. To give you some idea of just how exciting, it almost led to the cessation of diplomatic relations between England and Australia. It went right to the very top. So my second book is a biography of the English hero of Bodyline, Harold Larwood by Duncan Hamilton.

Briefly it was a technique designed to combat a single Australian batsman, Don Bradman, who, a couple of years before the 1932-33 Bodyline tour, murdered the English team on their own ground. Bodyline was developed after cine footage of Bradman suggested he didn’t like a short high ball aimed at his chest, so the English got a young fast bowler in to deliver exactly that kind of ball, right at the ribs. That bowler was Harold Larwood, the fastest in England – in the world probably. He was whippet-thin, working-class, a miner from Nottinghamshire – malnourished but fast as fuck.

Bradman’s batting average is cut by 50 per cent. The Australian crowd went berserk: 5,000 police were required to keep them off the pitch in Adelaide. A telegram was sent by the Australian captain saying only one side was playing cricket. The Australians were whining about intimidation, but it’s my strongly held view that Bodyline was perfectly reasonable.

Because it was a perfectly legitimate ball. I mean, if you can’t play a ball off your ribs, tough shit. The Australians massively overreacted. They were outraged because the English arrived determined to do what it took to win. But the tragedy was that Larwood, having defeated Bradman, returned to a divided country. The English had dropped a nuclear bomb, and a lot of people didn’t like that. The rules of cricket were changed to stop the same thing happening again, and the whole thing was swept under the carpet.

The result was that Larwood never played test match cricket again and eventually settled in, of all places, Australia, where actually he fitted in well, was taken in and accepted and felt at home. There’s no doubt who the hero is, or the villain: the bastard Bradman. 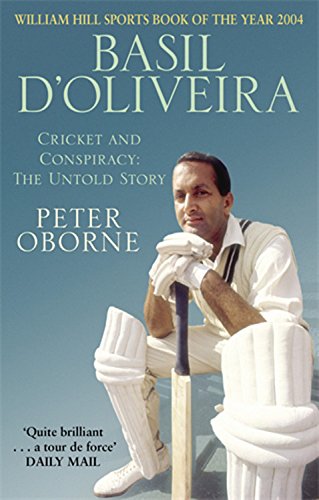 So it’s a huge claim: that a brief stint on a cricket pitch, not even against South Africa, achieved something that mass protest and any amount of diplomatic pressure had failed to achieve. And by the time you’ve finished you feel he might be right.

He bludgeons you into it?

Which is quite an accomplishment. Basil was Cape-coloured, so in South Africa he had a status higher than some, but under apartheid considerably lower than is necessary for him to play against white men. But then he came to England and nothing could stop him. He was a genius batsman. He got picked for England and in 1968 he scored his 158 against Australia.

The following year England were scheduled to tour South Africa and if D’Oliveira had been anybody else he would have been picked for the side straight away. But he wasn’t. Nobody said it was because he was a bit too dark. The MCC claimed nothing had been considered but cricket, implying, against all evidence that he wasn’t good enough.

Anyhow, one of the chosen squad suffered an injury, and they did, actually, pick D’Oliveira. There was an unbelievable amount of rubbish involved, but they picked him, and the upshot was that the South African prime minister objected and the tour was called off.  The English couldn’t take instruction openly from another government about the racial constitution of a cricket team.

It opened the flood gates and England refused to play cricket in South Africa until 1992. Except the rebel tours of the 1980s, of course, but they weren’t sanctioned – just mercenaries.

Let’s look at the last on your list of cricket books.

My last book is an indulgence: England Versus Australia. Nobody else would have picked it, but I was given it when I was eight years old. England played Australia in the centenary test match in 1977, and to commemorate this a man called David Frith, who wrote an excellent book about Bodyline that I didn’t choose, compiled a book which is a pictorial history of every single test match that had ever taken place between England and Australia. He subsequently updated it, so it now goes up to 2007 – it doesn’t have the 2009 series but he’ll update it again.

As an eight-year-old I’d open this hardbacked book and it would have every test match. In 1877 they’d have artists impressions of the game and photographs of the occasional player, like A C Bannerman, who was the first man ever to score a century. And with the pictures a little potted description, no more than 250 words, of the match. I read it from cover to cover repeatedly for about five years and just absorbed the look and feel of the people, the rickety wooden pads, extraordinary moustaches and incredible beards. You see the crowds with their hats and umbrellas, the way people used to stand, what cricket grounds used to look like, faces, actions, everything is glorious and mesmerising, the whole evolution of the game. It’s the most beautiful thing I think I’ve ever seen in my life.

Daniel Norcross is a cricket commentator for the UK's most prestigious cricket programme, the BBC's Test Match Special. In 2009, he launched Test Match Sofa, an alternative cricket commentary, at one time available on the internet with listeners in 134 countries and a blend of comedy, real-time sports commentary and farce.

Daniel Norcross is a cricket commentator for the UK's most prestigious cricket programme, the BBC's Test Match Special. In 2009, he launched Test Match Sofa, an alternative cricket commentary, at one time available on the internet with listeners in 134 countries and a blend of comedy, real-time sports commentary and farce. 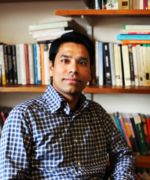 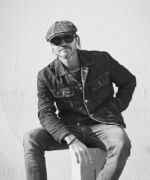 What does it mean to live wild and young and free? We asked the authors of a photography book on surf van culture along the California coast—"a story of youth choosing to follow their dreams, living out of vans, existing for surf and travel and freedom, and always chasing the best waves"—for references that help answer this question. Wanderlust can be a philosophy for life, as these books illustrate beautifully.