Political scientist Patricio Navia discusses how the identity of Latin America is inextricably bound up with its colonial history, why Latin American voters elect left-wing leaders, and how social inclusion is necessary for Latin America to realise its full potential

I know it is a vast continent with many different countries, but how would you broadly describe the politics in Latin America?

Although it is a vast continent, all of Latin America together has fewer people than India or China. There are two things that Latin American countries all seem to have in common.

One, they were all colonised in such a way that their identities today result both from the colonial experience and from the pre-Columbus period. Latin America per se is a result of a violent clash, if you will, between Europe and the indigenous cultures in the Americas. The second is the persistent levels of inequality that have characterised the region since the colonial period. 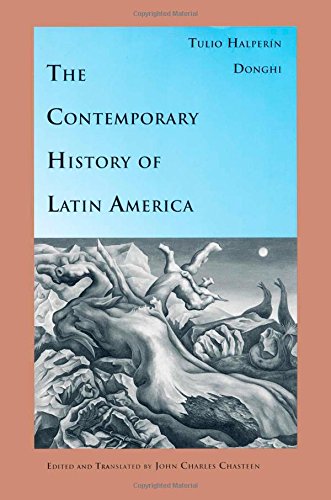 The Contemporary History of Latin America

Your first choice is The Contemporary History of Latin America by Tulio Halperín Donghi.

This is a history book by an Argentine historian who taught at Berkeley for many years and it covers the history of Latin America since independence, highlighting one particular point. That is that the structure of inequality that characterises Latin America explains the political structure in the region and also the economic conditions. In short, the book discusses why Latin America has failed to develop.

What kind of examples does he give of that?

He naturally pays more attention to the larger countries like Mexico, Brazil, and Argentina. For example, the book is very good at explaining why, at the turn of the 20th century, Latin American countries did not readily embrace the industrialisation process that was going on in Europe and why, in that sense, they were left behind. He says Latin American countries did not embrace industrialisation because they had cheap sources of labour and also because agricultural production was so successful that they chose to continue producing primary goods rather than invest and acquire the necessary technology to industrialise.

And would you say that is still an issue today?

Yes and no. It’s an issue in that they need to go beyond primary goods and raw materials but perhaps the way to industrialise now is not the same as in the late 19th century and early 20th century. Constructing railroads may not be the way to go today, but certainly introducing technology and improving the quality of education is something that they should think of. 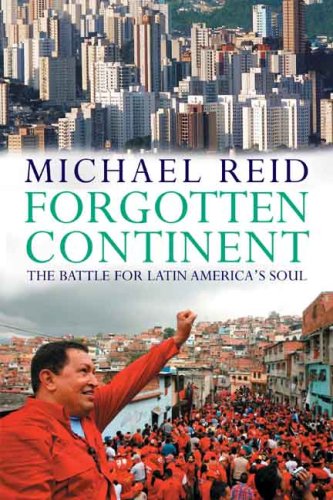 Your next book is Forgotten Continent: The Battle for Latin America’s Soul by Michael Reid, who is an editor at The Economist.

Michael Reid focuses on the degrees of populism in Latin America. He looks at how populism has led countries to choose the wrong economic policies that focus mostly on immediate redistribution rather than on sustained economic growth. Bolivia is one recent example.

The book also covers very well the early 20th-century examples of populism, looking at people like Getulio Vargas in Brazil and Juan Peron in Argentina. He also discusses more recent events like the Cuban Revolution and Hugo Chavez in Venezuela and the sort of new left-wing governments that emerged in Latin America in the late 1990s and early part of this century.

These people have a very different style of governing to the previous left-wing governments.

Yes, they do. But that is a result of technological developments. So popular leaders now communicate directly with the people through television, not through massive rallies like in the past. But they still mostly rely on their personalities rather than on political institutions. So personal leadership rather than the political parties or institutions are the channels through which representation takes places in Latin America.

Yes, but not just Chavez – there are other leaders who also do that in Latin America. In general, Latin America’s political parties tend to be very weak and unstable and that makes it very difficult for democratic institutions to consolidate. People rely almost exclusively on the strength of the individual leader.

As a result, people think that the stability of the system depends on the leader being in power and not in institutional strength. This is what happened in Colombia very recently. Also, many people were concerned in Brazil about what would happen to the country after [Luiz Inácio] Lula [da Silva] left office.

Do you see Latin America as the forgotten continent? Do you think that is a fair description?

Yes, in that the relative weight or share of world output that Latin America counts for has slightly decreased over the past 100 years. In a sense, Latin America is a land of unfulfilled potential. That is because it hasn’t got its act together and the world has moved on.

“In a sense, Latin America is a land of unfulfilled potential”

And this is partly because Latin American countries continue to rely on exporting commodities rather than on investing in education and technology to move up the ladder and produce more finished products.

Although the region has been doing very well recently and has survived the recession a lot better than many countries in the West.

All countries in Latin America in the last few years have done very well because the price of commodities has increased dramatically. But they are becoming increasingly dependent on the raw materials they export. Last year [in 2010], for example, Peru grew at almost 9% and Argentina grew at 8%, but this is because they produce primary goods that are in high demand. The question is whether they will be able to make the transition to more value-added goods. That also depends on their ability to educate their population better. 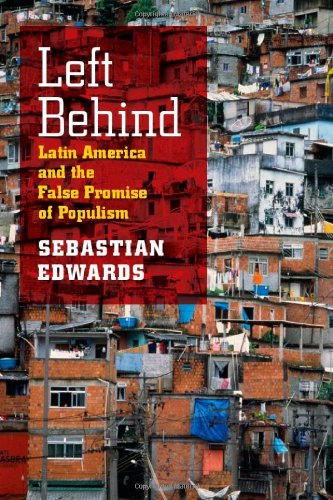 Sebastian Edwards’s Left Behind: Latin America and the False Promise of Populism is your next choice.

This is a book by an economist who is making a similar point to Michael Reid but he probably explains it better in terms of what the economic policies are that the populists are promoting and adopting and how they hinder long-term development in Latin America. Sebastian Edwards is a Chilean who has made interesting contributions to defining populism.

What about the Chilean model – does he think that works?

The debate in recent years regarding Chile is all about how to move the country beyond cyclical copper prices that give the country good years when the price is good and then move it to bad years as the price goes down. Edwards in his book highlights the need for countries to be counter-cyclical in their economic policies so that they can save up money in the good years.

Which Chile does do.

Yes, but it has only been doing this since 2003 when the policy was implemented. And Edwards says it is something other countries should be doing as well. 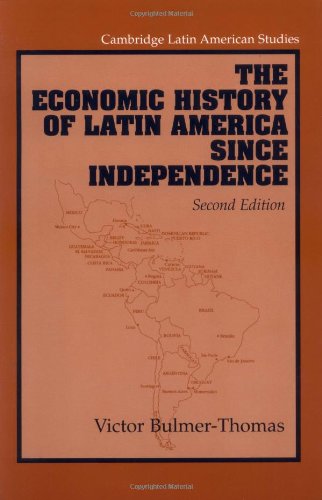 The Economic History of Latin America since Independence

Let’s move on to The Economic History of Latin America Since Independence by Victor Bulmer-Thomas.

This is more of an economic historian’s approach to what has happened in Latin America in the past 200 years. Bulmer-Thomas, in a very carefully constructed book, explains why Latin American countries have failed to develop and how they have been seduced by the notion of exporting raw materials rather than adding to their exports.

It is perhaps a bit more difficult to read than the previous two. But for readers who are truly interested in the economic history of Latin America, this is going to be a very valuable book that will help them understand some of the problems that the world economy is going through today. 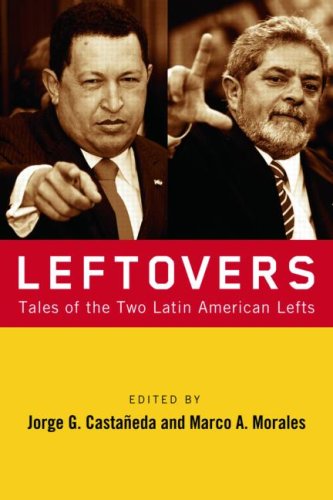 by Jorge G Castañeda and Marco A Morales

Your final book is Leftovers: Tales of the Two Latin American Lefts by Jorge G Castañeda and Marco A Morales.

Who is held up as the poster boy for Latin America’s left?

Most people would say that Lula was an excellent left-wing president because of the policies he implemented. He retained the best economic policies implemented by his predecessor but he also put special focus on helping the poor and creating a safety net for those who are left out.

You could also say that both Ricardo Lagos and then Michelle Bachelet in Chile did similar things and the president of Uruguay, Tabaré Vázquez, was very good. But because Brazil is so large what happens there is much more important than what happens in the rest of Latin America.

Do you think that Latin America will ever be able to reach its potential?

I would offer a qualified yes as the answer. There is one condition that Latin America countries have to meet and that is the condition of social inclusion. They have to fight inequality and provide their people with the tools so that they can join this market-friendly economy and succeed in it. Market-friendly capitalism will only work if a sufficient number of people are part of the winners. If market-friendly capitalism only works well for the elite then Latin American countries will not be successful.

You could argue that if it works well for the elite that it will still make the country successful in economic rather than social terms.

The system worked well for Venezuela in the 1970s and 1980s but given that a lot of people were left out those that were left out eventually reacted and wanted to take part in the process and elected a populist leader, Hugo Chavez, who led the country in the wrong direction. So I think it is not sufficient to have a tiny elite doing well. Distribution of wealth is also a necessary condition for Latin America to be sustainable and for democracy to consolidate and be stable.

Patricio Navia is Professor of Liberal Studies and Adjunct Assistant Professor in the Center for Latin American and Caribbean Studies at New York University. He is also a Professor of Political Science at Universidad Diego Portales in Chile. His areas of interest include democracy, inequality and political change in Latin America.

Patricio Navia is Professor of Liberal Studies and Adjunct Assistant Professor in the Center for Latin American and Caribbean Studies at New York University. He is also a Professor of Political Science at Universidad Diego Portales in Chile. His areas of interest include democracy, inequality and political change in Latin America. 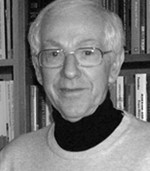