The best books on Samuel Johnson

Samuel Johnson, author of the 1755 A Dictionary of the English Language, was not a hard-hearted Tory caricature, but a champion of the poor and enslaved, according to Margaret Thatcher’s Secretary of State for Trade and Industry, Peter Lilley. 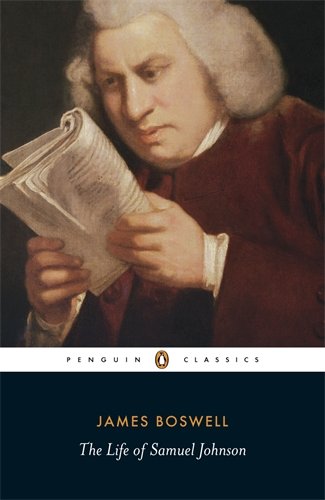 The Life of Samuel Johnson

Your first book is by a contemporary of Johnson’s, James Boswell.

This is the groupies’ biography in that Boswell was a cloying groupie but, nonetheless, he wrote the greatest Johnson biography of all time and the best known. It was written at the time and, of course, Boswell took down every word Johnson said. It is extremely vivid, though you never know to what extent Boswell was tarting it up at the end of the day, but, given that Johnson had this pithy style, it’s probably hard to embellish very much. Johnson made it a practice from his earliest youth never to say anything unless he said it as well as you could possibly say it. He had a crisp style and spoke Latin so his English was very good. 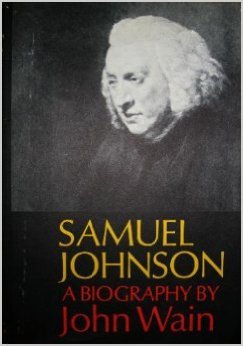 Your next book is the John Wain biography.

Wain was a poet and novelist and he wrote this biography in the late 1960s, I think. I got him to come and speak at the Bow Group. He was not a great Tory, but he was conservative with a small “c” and he was a bit of an angry young man. Samuel Johnson was an angry young man and a Tory, a Conservative with a capital “C”. This book is wonderful for its sheer sympathy, perhaps because it is written from the point of view of a fellow poet and novelist. I knew Johnson was a Tory and I knew he had that boring old Tory caricature of being a crusty old reactionary, as all Tories do – supporting the rich against the poor and the privileged against the underprivileged. But it was a surprise to find that he was actually very bohemian. He had a strong sympathy with the poor (“Slow rises worth, by poverty depressed” – London) having grown up poor and having lived on Grub Street.

He tried to set up as a schoolmaster in Lichfield and failed, so he walked to London in 1737 with his pupil, David Garrick, who, of course, became a famous actor and much richer than him. Garrick went on to make a great fortune.

Wain has sympathy for Johnson as a writer and as a person and, in some ways, I think John Wain sympathises with his moral attitudes. It was out of fashion in the 1960s to be a moraliser. Johnson, of course, wrote about morals and good and evil in The Rambler (1750-52). 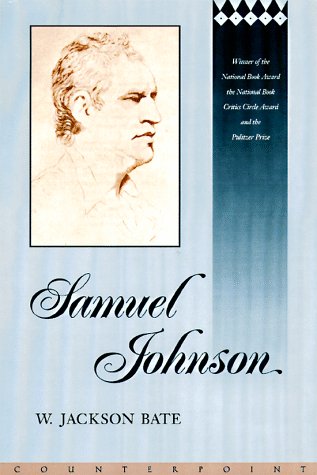 And now the Bate biography.

Bate, certainly prior to the latest Peter Martin biography, which I haven’t read, is, despite being marred by a slight touch of Freudianism, the definitive modern biography of Johnson. It is easier to read than the Boswell and more comprehensive than the John Wain. He has absorbed all the existing material and research and has also done his own research.

Everyone gets very uptight, and there is a great mystery, about whether or not Johnson was having a sado-masochistic relationship with his friend, Mrs Hester Thrale. The evidence is taken from her letters and notes to him in Latin and from his own notes that refer to “sweet bondage”. John Wain thought they had been having a sado-masochistic relationship, but Bate thinks it refers to Johnson’s fear of madness and his periods of depression. He had always had bouts of depression, when he didn’t finish Oxford (he was at Pembroke College) because his father went bankrupt and he went back to Lichfield for two years. Then, later, he had another breakdown and was rescued by Mrs Thrale and her family. So, he had this fear of madness and was either afraid of being locked up or he wanted someone to lock him up. Personally, I don’t know or care very much since it didn’t seem to inform his life in other ways if he had a bit of bondage with Mrs Thrale! If he did, I’m sure he regretted it. He was very devout and unsure as to whether his repentance was great enough to ensure a happy afterlife.

It is very hard to see why he was worried. He was incredibly generous and essentially ran a welfare state of his own. There was an old lady he took in and she accompanied him to fashionable places where she caused distress by her poor table manners. His adopted son, Frank Barber, was a freed black slave and became his heir. He took in reformed prostitutes and half a dozen others. He spent half his money on derelicts and drop-outs. He showed a goodness that is rarely practised on this scale. I quoted him in my Party Conference speech in 1992, when I was Social Security Secretary, saying: “A decent provision for the poor is the true test of civilisation.” 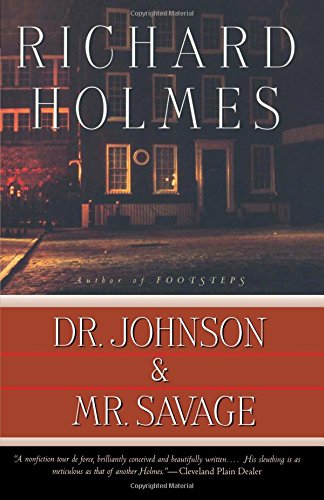 And now the Richard Holmes book about Johnson’s friendship with the poet, Richard Savage.

When Johnson was still young and poor in London he got to know Richard Savage who was also poor. Savage claimed to be the illegitimate son of a countess. He was wanted for murder, he was dissolute and dissipated and part of the Jacobite “out group”, sympathisers with the House of Stuart. Johnson and Savage wandered the streets, slept out in the open and set the world to rights, as one does at that age! Samuel Johnson wrote the life of Richard Savage in his Lives of the poets, and it’s a very sympathetic account, including the dissipation.

Savage had indeed committed a murder, of James Sinclair in a drunken brawl, and he was convicted and sentenced to death, but was reprieved after the intercession of the Countess of Hertford in 1727. It was a strange alliance, that of a dissolute, drunken and murderous poet and the upright Christian Samuel Johnson. Well, I suppose Savage was Christian too, but just not very good at it. Holmes does a sort of Sherlock Holmes account of their friendship. His book doesn’t, as I recall, come up with any kind of key to the mystery of their friendship. The friendship is only a mystery to those who live by stereotypes. Johnson wrote: “Those are not proper judges of his conduct who have slumbered away their time on the down of plenty. Nor will any wise mind presume to say, “Had I been in Savage’s condition, I should have lived or written better than Savage.” 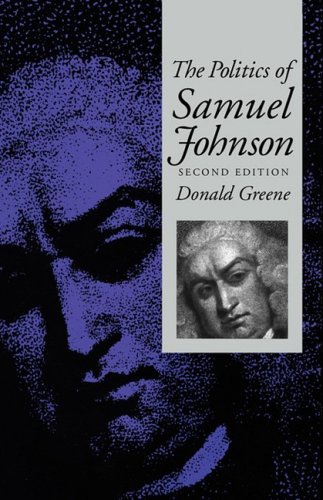 The Politics of Dr Johnson

Greene debunks the whole caricature of Johnson, which has been the predominant view since Thomas Babington Macaulay’s great diatribe of 1818 depicting him as a Tory reactionary doing all the things Tories are supposed to do. Macaulay, of course, ignored the fact that Johnson was an early campaigner against slavery and an open supporter of women. He described the poet Charlotte Lennox as being “superior to them all”. Johnson belonged to something called “The Club” along with Boswell, Joshua Reynolds, Goldsmith … It’s extraordinary to think of them all in the same room at the same time discussing literature, politics. They were not, of course, all of the same ilk politically. Greene describes Johnson as he was. He shows him as an attractive, humane and gentle chap. Boswell tells us that while Johnson was dining in Oxford with “some very grave men” he proposed a toast: “Here’s to the next insurrection of the negroes in the West Indies.” He was notoriously unsympathetic to the American revolution and said: “How is it that we hear the loudest yelps for liberty among the drivers of negroes?”

British politics has a tradition of seeing the right as caricatured reactionaries, hard-hearted and callous, but Johnson was a self-proclaimed Tory and Greene shows him as he was – not the caricature at all.

Peter Lilley was Margaret Thatcher’s Secretary of State for Trade and Industry 1990-1992 and was Secretary of State for Social Security 1992-1997. He was Member of Parliament for St Albans from 1983-1997 and, following boundary changes in 1997, he became MP for Hitchin & Harpenden. He chaired the Globalisation and Global Poverty Policy Group, advising Bob Geldof, which reported in July 2007.

Peter Lilley was Margaret Thatcher’s Secretary of State for Trade and Industry 1990-1992 and was Secretary of State for Social Security 1992-1997. He was Member of Parliament for St Albans from 1983-1997 and, following boundary changes in 1997, he became MP for Hitchin & Harpenden. He chaired the Globalisation and Global Poverty Policy Group, advising Bob Geldof, which reported in July 2007.

Thatcherism - the next generation
by Peter Lilley