The best books on Pirates

People see in pirates what they want to see, says historian and author Adrian Tinniswood. He recommends five fascinating books about pirates. 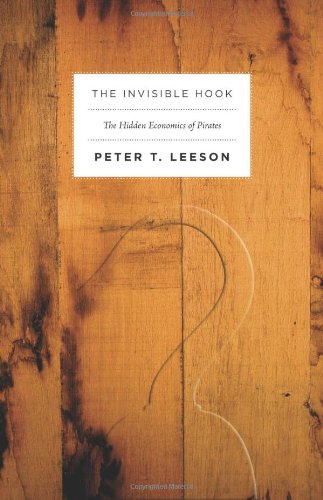 Tell me about your first book.

It’s great fun. Peter Leeson bandies clichés around in a delightful way. He talks about the briny deep and walking the plank. But, essentially, it’s a book about economics in the world of the 17th-century pirates of the Caribbean. It’s a very good example of the way that pirates have been co-opted to different people’s needs. With Leeson, he sees them as proto-capitalists in a free market. Others see them as proto-Marxists, while the gay movement has decided that pirates were the pioneers of equal rights. The problem is that people get selective and start to pick out the elements which will support their thesis. Leeson picks up on the idea of a brotherhood, an early type of democracy. So, although I find his book interesting because of his new way of looking at things, I can’t say I really subscribe to all his views. My model of piracy is one of socialised crime. He sees them as a great example of privatised endeavour, whereas I see them as instruments of the state. 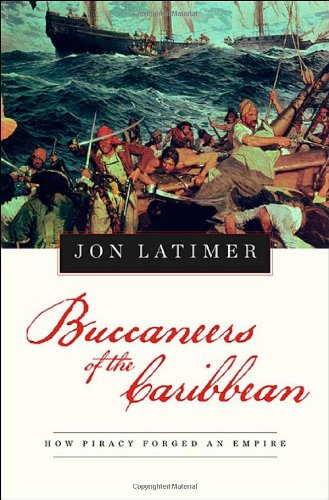 Buccaneers of the Caribbean

What about your next book, Buccaneers of the Caribbean?

This book deals with the same pirates as Leeson does, but takes an entirely different approach. What Buccaneers of the Caribbean does is give us a more vivid glimpse of the reality of things. The Jack Sparrows, the Johnny Depps – the Pirates of the Caribbean – were engaged in a land war, fighting the Spanish. Jon Latimer suggests that fighting the Spanish in the New World made them frontline troops in British imperialism. And I find that argument a lot more convincing than the one made by Leeson. Of course, many of them were motivated by greed. All pirate activities are about making money, that’s why they do it.

But, Latimer also brings out the strong anti-Catholic strain in the pirates of the Caribbean. A lot of them were ardent Protestants from England and Holland who wanted to fight the Catholics. They may not even have realised it themselves, but the culture that produced them suggested that it’s OK to fight Spain. There were times in the 17th century when England was at war with Spain and times when it wasn’t but there is this feeling that, whether at war or not, it’s was always all right to attack the Spanish!

There’s this idea of the Age of the Buccaneer in the book. What does that means?

Well, we need to go back a bit. In the 1580s and 1590s England is at war with Spain and there were lots of privateers. Privateers are people working as mercenaries who have letters of commission which allow them to attack the merchant shipping of a hostile nation. In those days they didn’t have a very big navy so it was a way of getting adventurers to fight your war for you. People who do that aren’t pirates, they are privateers, and that means they’ve got a quasi-legal status and these were the buccaneers. There’s this great story in the book about a famous pirate, Henry Morgan, who was so outraged when a London pamphlet described him as a pirate that he sued them. He ended up winning the princely sum of £200. I find it incredible that he had a lawyer in London who could actually take out an action for libel. The distinction between privateer and pirate is one that the privateers clung to because pirates were criminals but in everyday life there really wasn’t much difference between them.

What kind of image did pirates have in those days?

So where does the idea of the Jack Sparrow swashbuckling-type pirate come from?

Even in the 17th and early 18th century, there is a sort of grudging admiration for pirates in literature. And later on in the 18th century you have more and more of a sense of the pirate as an outlaw, rather like the Robin Hood of society. They’re stealing from the wicked Spanish Conquistadors and the Ottoman Empire which makes them the good guys. 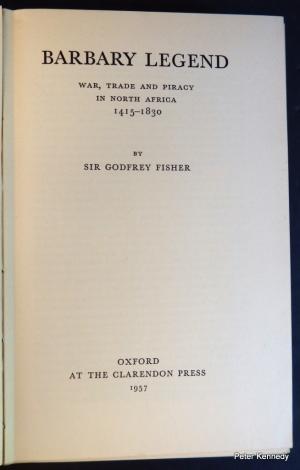 On to your next book, The Barbary Legend.

Fisher’s book is a wonderful corrective to the prejudice we have about the Barbary Coast pirates. It almost goes too far. It suggests that the West has approached the idea of North African pirates with a prejudiced eye, because they are Islamic. Fisher says: why don’t we look at how the West related to North Africa and particularly the four Barbary states. These were Morocco and the three Ottoman states of North Africa – Algiers, Tunisia and what we would call Libya.

I think that people still have that prejudice today. Just look at what’s going on in Somalia. It’s all part of a subconscious racism. These are black Muslims so we don’t romanticise them.

In the past slavery was central to Barbary Coast pirates. These pirates were much more considerate than the pirates of the Caribbean who were after loot. The Barbary pirates didn’t kill people because they wanted to sell them. The same tactics are being used today. The pirates want to intimidate people without doing them harm. They want ransom. They relied on shock and awe and the Somali pirates do exactly the same thing.

There’s this great statistic that in the 17th century alone about a million Europeans were sold into slavery. But let’s not forget the same was true for North Africa – around the same number were also sold into slavery in southern Europe in places like Granada in Spain. Fisher points out that it’s a two-way street. The West is not blameless. We cheated and we lied as well. We’re not talking about heroes, we’re talking about criminals. Whatever you may like to think – pirates were, and still are today, bad men doing bad things. As to whether the Barbary pirates or the Caribbean pirates were the worst – that depends entirely on what your ideological point of view is. 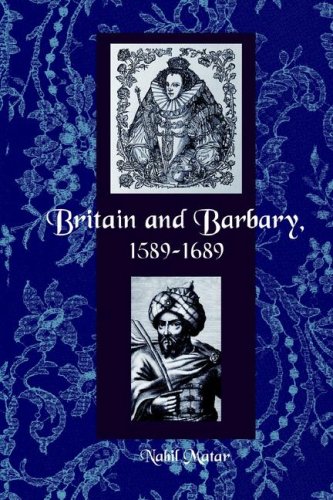 More about the Barbary pirates with your next book.

Nabil Matar is a brilliant author. He’s cornered the market in revisionist history. He looks at how Britain related to Barbary. He goes back to English sources in the 17th century that described “The Turk”, that sort of catch-all term for Muslims at the time. These sources are like a Daily Mail editorial, just as filled with bigotry and prejudice as responses to Islam today. And Matar holds a mirror up to western culture and shows how prejudiced we are about an entire civilisation. 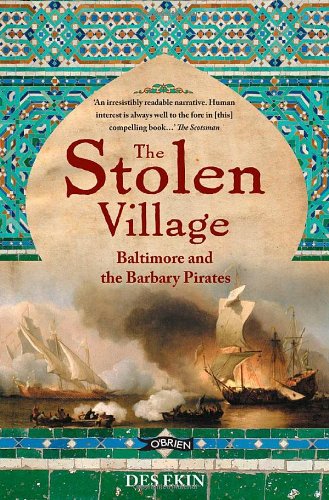 Your final book has an amazing, unexpected story.

Yes, it’s astonishing. Des Ekin is a man who tells this story with the great verve and narrative flair of a journalist. In 1631 a Dutch renegade called Morat Rais sailed to the south coast of Ireland. One night he landed outside the small village of Baltimore in County Cork and he kidnapped 107 protestant settlers and took them back to Algeria and sold them. At the time Ireland was considered to be a nest of pirates. The Irish were sympathetic to the Barbary pirates, because they were anti-English and paid well. In the 17th century there were alehouses on the west coast of Ireland where you got your change in Algerian dollars, there was that much commerce going on. In the story there is some controversy about what made Morat choose Baltimore. Some say he was going for a richer town up the coast but was put off because it was so heavily armed. The idea is that Morat captured someone who gave him this inside information and pointed him towards Baltimore because they were Protestants and the informer was a Catholic.

With all these books and the research for your own book, what kind of parallels have you found with the past and modern-day pirates?

What strikes me very strongly is that the pirates in the books by Peter Leeson and John Latimer are held up as heroes. There is something romantic about them. You don’t see the same romance attached to the Islamic pirates of Barbary. They are seen as the other, the enemy. When an English pirate like Morat converted to Islam it was seen as the ultimate betrayal. They had gone over to the other. How come Jack Sparrow from The Pirates of the Caribbean is fun and glamorous and we can laugh at his antics and yet we don’t do the same with the Somali pirates?

If there’s a film in development at the moment, it won’t be about a plucky band of Somali pirates. It will be about a clean-cut, Tom Cruise, US military figure, fighting against overwhelming odds in the Gulf of Aden.

Adrian Tinniswood is obsessed with all aspects of 17th-century history. When he was researching his last book, The Verneys: A True Story of Love, War and Madness in 17th-century England, he came across Sir Francis Verney, a Buckinghamshire squire who converted to Islam and became a Barbary Coast pirate. That is what led to his current fascination with pirates. Research for his new book, Enemies of Mankind: Tales of the Barbary Pirates, has shown him that the pirates of history are surprisingly similar to the pirates of today.

Adrian Tinniswood is obsessed with all aspects of 17th-century history. When he was researching his last book, The Verneys: A True Story of Love, War and Madness in 17th-century England, he came across Sir Francis Verney, a Buckinghamshire squire who converted to Islam and became a Barbary Coast pirate. That is what led to his current fascination with pirates. Research for his new book, Enemies of Mankind: Tales of the Barbary Pirates, has shown him that the pirates of history are surprisingly similar to the pirates of today. 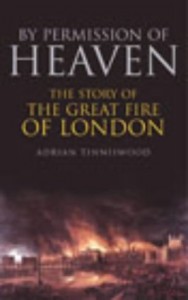 By Permission of Heaven
by Adrian Tinniswood 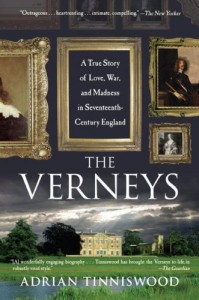 The Verneys
by Adrian Tinniswood