The best books on Screenwriting 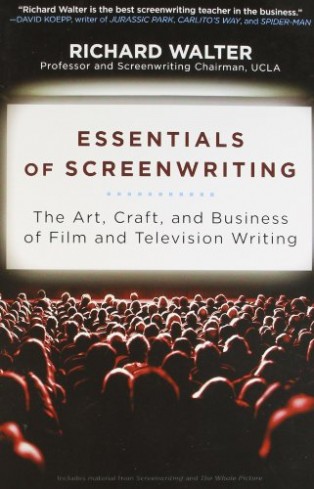 The Hollywood screenwriting guru picks the best five books on writing a blockbusting screenplay. Aristotle knew what he was doing. It's all about the story. Less is more. One word is better than lots of words. Simple really.

I should make a full disclosure here and say that two of these books were written by close friends of mine: Hal Ackerman and Lew Hunter. Lew was my long-term partner at UCLA and we’ve been in the business together for 30 years. He’s now an emeritus professor living in Nebraska but he comes back to Westwood every winter to teach a 434. That’s the Film, Television and Digital Media catalogue number and the name of our meat-and-potatoes, bread-and-butter course. I’m into high-cholesterol metaphors. Our students take the course several times during their tenure in our Screenwriting MFA program at UCLA.

It’s a feature-length film workshop and everyone writes a feature-length film. Some students will enrol in the course eight or nine times. Anyway, Lew knows better than to spend the winter in Nebraska and he’s a legendary screenwriting teacher – many of the great writers have been through this course. 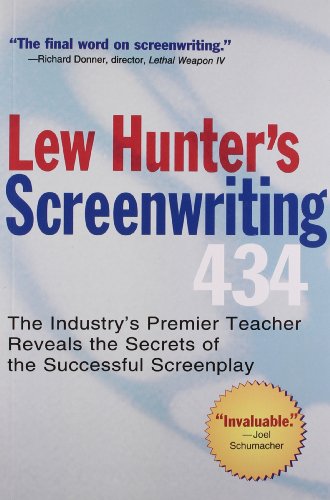 I love Lew, but that shouldn’t be held against him. You know, most people can’t take his class because you have to be a matriculated UCLA student, but you don’t need to take the class! You can read the book!

What does he say in it?

Well, there are two big pieces of advice. Writers write. Don’t wait for inspiration. Everyone who writes is a writer. Think of yourself as a writer. And less is more. We preach this with religious fervour. Economy, efficiency, integration. A screenplay is an elaborate list of sights and sounds whose purpose is moving the story forward.

Is the advice in Ackerman’s book different? Write Screenplays That Sell: The Ackerman Way.

I’m not crazy about the title, and I expect Hal agrees at least somewhat with me about that. He was pressured by the publishers. It’s a real dime store title. It’s a brilliant book and he’s a brilliant educator. Hal’s been here at UCLA… I don’t know. Whenever I say two or three years it turns out to be 25. So Hal’s been here a quarter of a century and has had a great presence here. He’s our screenwriting co-chair. What he says is that it’s all about story. We’re an old-fashioned programme here and we’re about the primacy of story.

People don’t go and see a movie because of the actors or the director. There are no directors that haven’t had their share of turkeys. The audience is smart and they have ways of finding the good stories. Shakespeare is not a little-known writer found in some archive by a group of academics – these plays were massive blockbusters in their day. Why? Because the plays are about violence, perversion, sex and tawdry, vulgar, ugly stuff. Oedipus? Well, you know what Oedipus does. Medea kills her kids. Macbeth murders Duncan in his sleep because he wants to be king. Richard III kills his own nephews. The body count at the end of Hamlet is nine bodies on stage in the final scene. Nobody wants to see ‘The Village of the Happy Nice People’. I mean, there’s a place for that, but not in art.

So art is where we act out our fantasies?

Yes. What I preach in my new book is that the movie theatre is a safe place to live out the brutal aspects of our character. We are violent. History is – God forgive us all – a catalogue of horror and violence. I have, as I do every morning, a copy of the New York Times and a copy of the LA Times in front of me. It’s a bloodbath! I do a lot of commenting in the media and my detractors (it thrills me that I’m prominent enough to have detractors!) say that a retro-hippy university professor like me should be railing against Hollywood, but that in fact I’m a company man, an apologist for Hollywood. But I really believe that film violence does no harm. As Aristotle says of Purgation, the theatre helps people by providing a safe place to experience the lethal aspects of our condition and to expend that energy in a harmless way. In fact, since television and film have become more explicit and violent in the past 30 years there has been a serious decline in crime. In fact, crime is plunging.

But the prison population isn’t.

That’s because of foolhardy drug laws. You could put all the cartels out of business by decriminalising drugs. A medical condition – drug addiction – should be treated medically. Imagine the damage you could do to the Taliban by decriminalising opium. It would rob them of their financial resource. 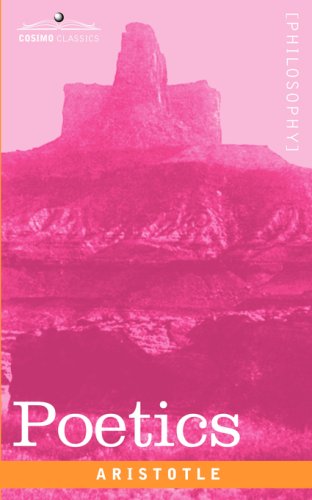 Tell me about Aristotle.

What is the essence of dramatic narrative?

It’s story. Character is important but character comes out of story. It still impresses me. Nowadays, with instant messaging and texting, word gets out incredibly quickly. There has been a huge reduction in the power of stars because a film comes out on a Friday night and people are already telling each other to stay away from this one or that one. Take Avatar. There’s no star anybody’s heard of in Avatar. It just underscores Aristotle. People want not actors but stories.

Any line that starts: ‘Look,’ or ‘I think…’ You don’t need that. Start at the beginning. 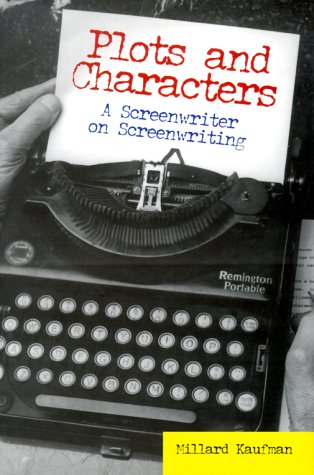 So, what does Millard Kaufman say in his book?

Kaufman is underappreciated. His book is called Plots and Characters and plots come first. Story is first. There are many dilettantes who think it’s about characters because it’s easy to come up with some zany character. Everyone has a ditsy spinster aunt, but it’s the colourful adventures that count. It is our actions that define us as characters and not the other way round.

What kind of character am I? Well, I was coming of age during the Vietnam war and I believe that what America did in Vietnam was a terrible mistake. But I was a good German. I exploited being a moneyed white guy and I went to film school and the government thought that what I was doing was so important that I didn’t have to go to Vietnam and they sent one of my darker brothers instead. This tells me about my character that I am a bit of a coward and I’m not sure that I’ve grown more courageous as I’ve grown older.

I had Neil Simon (writer of The Odd Couple and a zillion Broadway hit plays) visit our class and I asked him: ‘Do you laugh at your own jokes?’ He said: ‘The first time I hear them I do.’

I don’t know of a writer who hasn’t had his characters do and say unexpected things. You have to stop intellectualising and see how it unfolds. Let them be and don’t drag them back to your preconceptions. Stay open to surprises! It’s good advice for life too. Shut up your mind and get into the flow of things. It’s hard to do.

Putting words down on a page can be a way of distancing yourself from the emotion. The psychoanalyst Wilfred Bion says that to be a good analyst you have to listen without memory or desire.

That’s perfect. When I lecture I tell people not to take notes. Just listen. 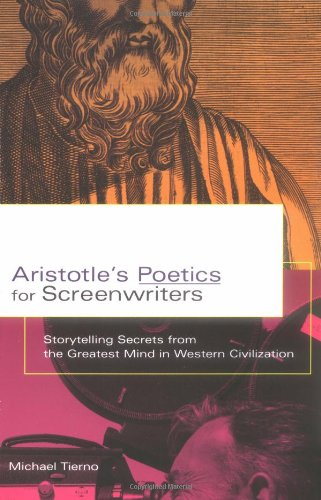 Tell me about the Tierno book.

I’m surprised that I’m recommending this because it has affectations that I find off-putting. It has lots of exclamation points!! Oh gosh!! Oh golly!! It’s self-conscious and he’s trying to be droll and wry.

But he really helps make Aristotle practical. The mistake that people make with Poetics is the same as they make with the Bill of Rights. The first amendment defends free speech, and people don’t like that it appears to protect pornographers and Nazis. And that is exactly who it protects. I’m huge on civil liberties and people say to me: ‘Why are you in bed with pornographers and Nazis?’ My answer: Night doesn’t fall all at once. When they’re arresting Jews on the streets it will be too late. The first amendment doesn’t need to protect people who say, ‘Have a nice day.’ People in those days were saying all sorts of jerky things, like, ‘Let’s overthrow the British!’ I hope you’ve gotten over it?

Yes! Tierno’s book. Well, it’s the same with Aristotle. People try to interpret him when they should just follow his rules. I compare it to a Honda manual telling you how to clean the fuel injector. You wouldn’t look for underlying meaning there and you shouldn’t look for it in Poetics. Beginning. Middle. End. The end is the part after which you need nothing. How many movies do you see that just end and end and end again? They just don’t know when to get off the stage! Even Spike Lee and Scorsese.

Richard Walter is a professor at UCLA and has mentored many of Hollywood’s most successful screenwriters. He is a member of the Writers Guild of America and the author of Escape From Film School and Screenwriting: The Art, Craft and Business of Film and Television Writing. He has written numerous feature assignments for the major studios and has sold material to all three networks. Walter lectures on screenwriting throughout the world.

Richard Walter is a professor at UCLA and has mentored many of Hollywood’s most successful screenwriters. He is a member of the Writers Guild of America and the author of Escape From Film School and Screenwriting: The Art, Craft and Business of Film and Television Writing. He has written numerous feature assignments for the major studios and has sold material to all three networks. Walter lectures on screenwriting throughout the world. 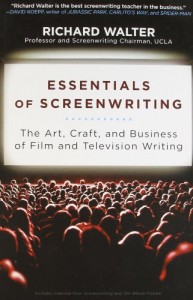 The Whole Picture
by Richard Walter 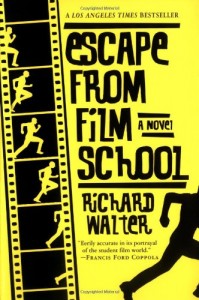 Barry and the Persuasions
by Richard Walter