The best books on Human Rights

Your first choice is Shah of Shahs, by Ryszard Kapuściński. It’s a great story, but is it primarily a book about human rights?

It’s not directly a book about human rights. It’s a political analysis and a portrait of the Islamic revolution in Iran. But, like all of Kapuściński’s works, it makes the connections between the small things and the big things that produce social and political change. It has one fabulous phrase, which I find myself quoting again and again. ‘The zig-zag to the precipice, the moment of the lack of fear, the moment when there is lack of fear, when everything changes. The man has stopped being afraid, and this is precisely the start of the revolution.’ It’s offered as a description of particular moment in the town of Qom. But it goes to the heart of the possibilities of civil society. People think, ‘We can achieve nothing’. But if everyone comes together, they can change a country, and that change can spill over internationally. 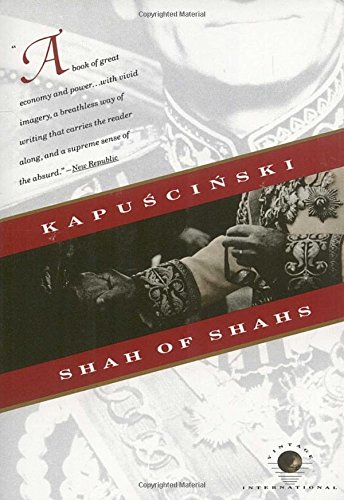 Kapuściński’s writing has a poetry to it that I adore. He was a journalist, working for the Polish state news agency, writing a lot of routine stories. Books were his release, a chance to get at the inner truth of what was happening. Some have accused him of imagining too much, but I remain loyal. Fundamentally, he doesn’t distort in the big picture. He lets things speak. It’s like a playwright’s writing, but it’s not fiction. He stands the test of time. 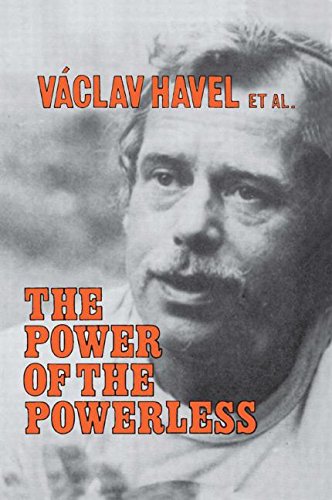 The Power of the Powerless

Iran was a reminder that you can overthrow one bad ruler, and get an even worse one in his place. The Czechs were much luckier ten years later. They threw out a dictatorship and got a democracy. Your second choice, The Power of the Powerless, is a collection of essays by Václav Havel, a leader of that Czech revolution.

This is absolutely a human rights book, and it contains one of the most magical essays in political philosophy ever written, which pays tribute to the importance of what Havel calls ‘living in truth’. Imagine yourself back in 1978, ten years after Soviet tanks had entered Prague, when it seemed that nothing could change. Havel’s argument in The Power of the Powerless, roughly speaking, was that if everyone stood together at a certain point, and decided to live in truth, to say, ‘That’s not the case – this is the case’, then everything could change, even in the most repressive of contexts. Havel imagined a greengrocer, rearranging his potatoes and carrots on International Workers’ Day, and refusing to put an official, empty slogan in his window saying ‘Workers of the World Unite’. The tiny act of just saying ‘I don’t really want to go along with this’ could have disproportionate consequences. The greengrocer would risk losing his holiday, perhaps suffering much greater punishments. But if lots of people were to do that together, asked Havel, how much else could they change? ‘The moment someone breaks through in one place, when one person cries out, “The emperor is naked!” – when a single person breaks the rules of the game, thus exposing it as a game – everything suddenly appears in another light.’

As Havel himself points out in the preface to Small Acts of Resistance, many were dismissive of the idea that ordinary people could make a difference. As he put it, he was seen as ‘a Don Quixote, tilting against unassailable windmills’. But what Havel proposed in 1978 was fundamentally what happened in 1989. For many people, memories of 1989 are organised around the fall of the Berlin Wall. According to that version, along came Gorbachev, and people were free. The real story was incredibly different. It began with pressure from the grassroots up, a decade before, in Poland. In Prague everything crumbled in the space of barely a week. People who had barely a fortnight earlier been saying, ‘There’s no point’ – they began to believe. 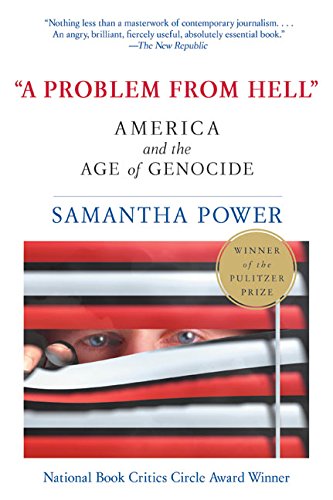 A Problem from Hell

Life in the Soviet bloc was brutal enough. But compared with Rwanda in the 1990s, it counts as positively genteel. Your next book, “A Problem From Hell”, by Samantha Power, asks, in effect, why the West did nothing to stop the genocide there. Does she find an answer?

When Power was writing, the Rwandan genocide had already happened, but Darfur was still to come. The sub-title of her book is ‘America and the age of genocide’, and she started work expecting to investigate how American foreign policy had coped so badly. Terrible events, including the mass killing of Armenians in Turkey early in the 20th century, and Pol Pot’s mass killings in Cambodia 60 years later, had gone completely unconfronted by the American and other governments. Then came the Rwandan genocide of 1994. Western governments turned away again. The UN Security Council only finally acknowledged it as genocide when the killing was basically all over – after what Power calls ‘a two-month dance to avoid the g-word’. Power found herself forced to the conclusion that American foreign policy hadn’t failed on all of these occasions. It had done exactly what it meant to do – which was to keep America’s hands out of the very worst stuff.

Power went on to show with forensic brilliance what that moral failure meant. Along the way, she brought back into prominence the work of Raphael Lemkin, a Polish Jew who, as a student in 1921, was upset by the fact that somebody could be prosecuted for murdering one person – in this case, the Turkish interior minister in Berlin, held to be responsible for mass killings of Armenians – but that if you killed a million people, there was no crime for which you would be held responsible. He found that ‘most inconsistent’. When the Nazis invaded Poland, he fought in the Polish army, then escaped to Sweden and later the U.S. The rest of his family perished. Understandably, he became still more obsessed with the crime to which he gave the name ‘genocide’ – that is, the killing of a nation.

As a law professor in America, he lobbied successfully for the UN to adopt a convention against genocide, which it did in 1948. He believed that international justice should count for something. That’s what Samantha Power believes, too. Since her book was written, almost as a continuation of her argument, the International Criminal Court started work in 2002. 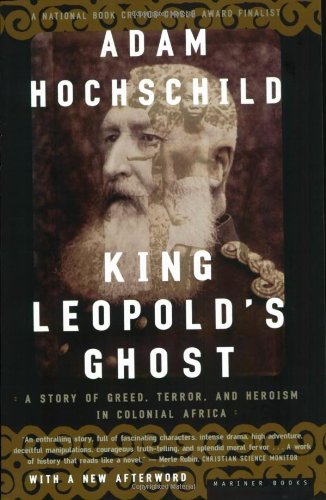 Your next book takes us a century backward in time, but still on the same part of the map, into what was then the Belgian Congo. Tell us about King Leopold’s Ghost, by Adam Hochschild.

Large parts of the Belgian establishment loathe this book. It tells, as its sub-title says, ‘a story of greed, terror and heroism’. It lays bare the absolute fiction that King Leopold’s fief in the Congo was based on some philanthropic urge – a line that Leopold managed to peddle with extraordinary success at the time. I don’t know if what Leopold did would be called ‘genocide’ today or not. But millions died under his rule, often in horrific circumstances, invisible to the rest of the world. Modern communications didn’t exist.

One hero of Hochschild’s book is a young Liverpool shipping clerk called Edmund Dene Morel, who realised in the course of his work that there was something terribly wrong with the Congo trade. The ships were coming back to Europe full of riches: ivory, rubber – fantastically valuable stuff then, as much as gold is now. But what went out to Africa was guns. In went weapons to repress; out came treasure. He felt he had stumbled upon a gang of thieves with a king at their head. In Morel’s own words, ‘I had stumbled upon a secret society of murderers, with a King for a croniman.’ He made the Congo his life’s work – setting up newsletters, feeding information to journalists. He got celebrated writers from Mark Twain to Arthur Conan Doyle involved. He placed op-eds in newspapers across the U.S. and Europe in a way that any modern human rights organisation would be proud of. He had a huge impact. He was a one-man human-rights organisation. Hochschild’s book is full of such extraordinary stories, powerfully told. 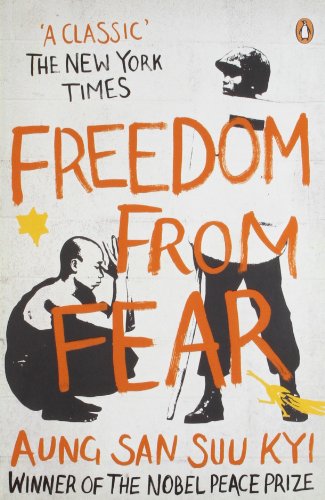 From a one-man human rights organisation, to a one-woman equivalent. Your last choice is Aung San Suu Kyi’s Freedom From Fear.

The copy I have is a much-read, much-battered old hardback from 1991. The word ‘icon’ is much bandied about, but there can be no question that Aung San Suu Kyi is an icon. When I was working at The Independent, I went to Rangoon and met her. A huge privilege. I have a picture of her above my desk at Amnesty, shot by the Independent’s photographer, Tom Pilston. That trip was one of most memorable things I’ve ever done.

There is a beautiful photograph of her, on her release several months ago, which was published as a double-page spread in the Guardian. What leaps out is the excitement in all the faces around her, on a crowded street. That image alone gives the lie to the idea that she is no longer relevant. For more than two decades, every conversation in Burma or about Burma has ended up being about Aung San Suu Kyi. Like Havel, like Mandela, she has proved that non-violence may not work fast, but eventually it can change things. I remember hearing very intelligent people saying of South Africa in the mid-1980s, ‘Oh, this is not going anywhere’. Likewise, you’d hear people say a few years ago of Aung San Suu Kyi, ‘She’s just an irrelevance, she’s locked up in her villa, life has moved on’. That argument is much harder to make now.

In Amnesty International’s fiftieth year, it is important to remember how much we can change, if millions stand together, putting pressure where it is needed.

Steve Crawshaw was as a journalist with The Independent, before moving to Human Rights Watch in 2002. He joined Amnesty International in 2010 as director of international advocacy. Last year he and his co-author John Jackson published Small Acts of Resistance: How Courage, Tenacity, and a Bit of Ingenuity Can Change the World , www.smallactsofresistance.com, a collection of inspiring short stories about fighting injustice, written jointly with John Jackson, and with a preface by Václav Havel.

Steve Crawshaw was as a journalist with The Independent, before moving to Human Rights Watch in 2002. He joined Amnesty International in 2010 as director of international advocacy. Last year he and his co-author John Jackson published Small Acts of Resistance: How Courage, Tenacity, and a Bit of Ingenuity Can Change the World , www.smallactsofresistance.com, a collection of inspiring short stories about fighting injustice, written jointly with John Jackson, and with a preface by Václav Havel. 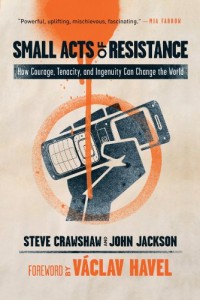 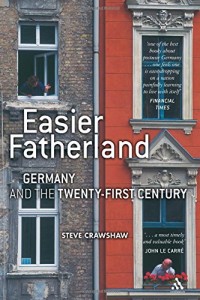 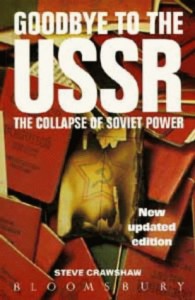 Goodbye to the USSR
by Steve Crawshaw 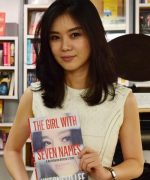 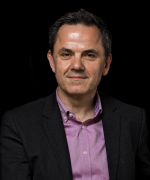