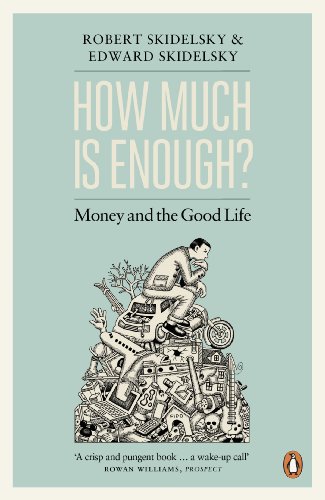 How Much is Enough?: Money and the Good Life

British philosopher Edward Skidelsky tells us about virtue from Plato to the modern day, and says Jane Austen got it right when she wrote about passion

How Much is Enough?: Money and the Good Life 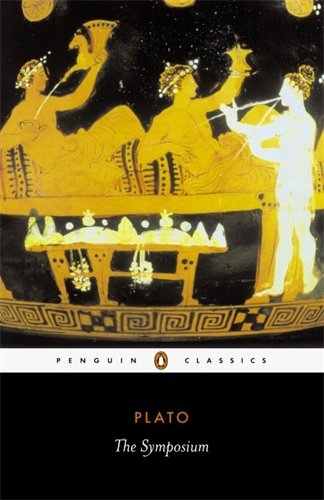 Shall we start with Plato? I assume you chose this to define the meaning of virtue.

Plato is the founding figure in the Western philosophical tradition and the Symposium is one of his most charming books – you can read it like a novel. It’s set in the house of an Athenian, and he’s invited Socrates and some of his other friends around after a theatrical event for a drinking party. They’re chatting, and they each give a speech where they set out their concept of “Eros”.

The one everyone remembers is the speech of Aristophanes, the comic playwright, who says that originally human beings had four legs, four arms, and two heads, and then Zeus broke us in two. So we’re all going around looking for our other half and when we find it, we will feel complete again. It’s a little twee, and I think it appeals to our romantic sensibilities, but it isn’t actually Plato’s idea of Eros at all. His idea is that it’s a desire for “the good” itself, and that we only desire an individual insofar as he appears to us to embody the good. Ultimately, sexual love is a kind of misdirection of this desire for the good, which we’ve got to transcend.

I’ve become fascinated with this idea, because I think it explains a lot of problems to do with moral motivation. A lot of people think that in order to motivate somebody to behave morally, you’ve basically got to make it in their interest: by setting out some system of rewards and punishments. But what Plato seems to be saying is that moral education is not a matter of imposing principles on people against their natural bent, it’s more a matter of engaging with their desires and educating them ­– leading them towards the good. And that, I think, is very attractive and important.

The Nichomachean Ethics was written at the same time, wasn’t it?

A little later. Aristotle was Plato’s most famous student. It’s not nearly as readable as the Symposium: it’s dense and obscure in places and you really do have to struggle with it, but it is a sophisticated and subtle analysis of the various virtues: courage, temperance, and wisdom among many others. It’s incredibly subtle and precise, especially when you compare it with the way a lot of moral words are used today.

I was struck by Aristotle’s description of courage in particular. The word as it’s used today by journalists and politicians has almost no meaning at all. People will say that some writer who wrote a very revelatory book about his son’s drug addiction showed incredible courage, or that someone who stands in the middle of Trafalgar Square and masturbates as part of some artistic performance shows real courage. And suicide bombers are “cowards”, which is precisely the one thing they are not. We use the words “cowardly” and “courageous” very loosely: really just to express the fact that we approve or disapprove of something. Whereas Aristotle shows you that you can really think very precisely about courage and what it means. He says courage is overcoming fear of something. Not just fear of anything: there are some things which you should feel fear about, like disgrace – so someone who overcomes their fear of disgrace is not being courageous, they’re just being shameless.

Aristotle also talks about the virtues as being means between extremes. So wit is a mean between the vice of deficiency, which is boorishness, and the vice of excess, which is buffoonery. Most modern moral philosophers would think that there’s nothing really to be said about wit: it’s just a matter of subjective opinion or preference, not something you can analyse or discuss rationally. But Aristotle shows that you can say quite a lot about it that is really plausible and persuasive.

Shall we move on to Jane Austen? Why did you choose Sense and Sensibility?

Really to make the point that many of the greatest moral thinkers are not philosophers, but novelists. Alasdair MacIntyre, one of my other choices, describes Austen as “the last classical moralist”, and I think Sense and Sensibility bears that out. There are two central characters, sisters, and they’re both in love with men who may or may not reciprocate. But whereas Marianne, who represents sensibility, reveals her love and is then snubbed and humiliated by the worthless Willoughby, Eleanor is much more discreet and after many twists and turns she finally marries her man. Jane

Austen’s purpose is to illustrate this very Aristotelian virtue of prudence: that you’ve got to look out for your interests, you mustn’t just give in to passion. Passion must be guided by reason, which goes against the grain of the way we think about it today. But Jane Austen is saying that passion that is rational and controlled is no less deep than passion that’s uncontrolled: in fact it may be deeper. This might sound cold or austere, but I think it’s right. 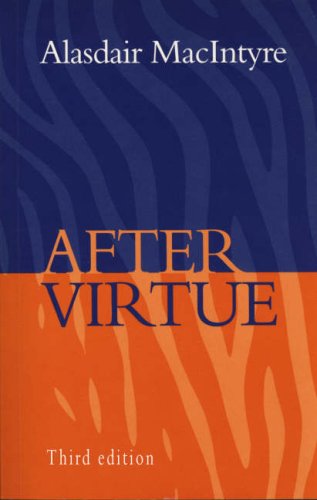 Are all these books you’ve chosen in some sort of conversation with each other?

Yes. For example, Alasdair MacIntyre is one of the leading modern moral philosophers who’s revived the Aristotelian approach to ethics. After Virtue is his most famous book. It begins with this marvellous apocalyptic scenario in which he imagines a society where there’s been an anti-science revolution. Some time after this catastrophe, people begin to try to reconstruct Western science from the scraps that remain. They put together charred fragments of Euclid and Einstein, and try to make sense of them. But what they’re doing isn’t really science in the true sense, just fragments of science. MacIntyre’s point is that this is what’s happened to moral language in our society. We think we’re talking about morality, but actually we’re just left with the fragments of morality. Because what’s been lost is the central idea of human beings as creatures with an inherent end or purpose.

Where or when does he see this catastrophe as having taken place?

He sees two main culprits. The first is modern, post-Newtonian science, which encourages us to think of the world in terms of causal forces, devoid of any intrinsic meaning or purpose. The other is the modern secular state. We think of the state as simply a neutral mechanism for enabling us to pursue our own individual projects, rather than as an institution devoted to the common good.

The book ends with a prophetic passage in which he says that the task now is to create local forms of community, in which the moral life can still be lived in the new dark ages which are already upon us. It’s powerful stuff. It provides a historical account of how the notion of virtue arose, and why it’s been lost. I think that’s its main strength. He doesn’t have any very realistic positive recommendations. 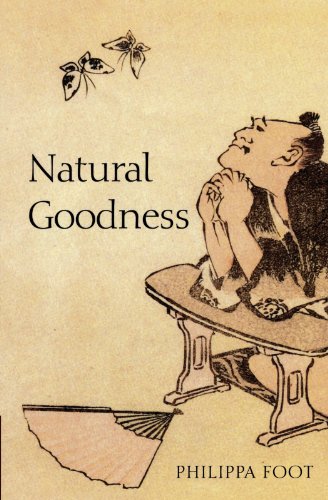 On that note, what about Philippa Foot?

Philippa Foot is also an Aristotelian, but of a rather different kind. MacIntyre thinks that the notion of virtue has to be detached from Aristotle’s original ‘metaphysical biology’ as he calls it, whereas Philippa Foot thinks that maybe it doesn’t. In Natural Goodness – which is beautifully written, by the way, and one of my favourite works of moral philosophy – she has this interesting discussion of the sentence “human beings have 32 teeth”. This is a perfectly ordinary sentence in English; readily intelligible, the kind we use all the time. But when you think about it, what does it actually mean? Clearly it doesn’t mean, “all humans have 32 teeth”. That would be false. It doesn’t mean, “the average human has 32 teeth”: that would also be false. What it seems to mean is something like: “human beings are meant to have 32 teeth”, or, “if everything goes well for them they should have 32 teeth”. In other words, it is a normative statement, as well as being an ordinary descriptive statement about the species homo sapiens.

Foot says that many of the statements we make about species have this odd feature of being both normative and descriptive. She’s attacking the dominant tendency in modern ethics to think of moral values as attitudes on our part, or stances. She says no, they’re facts about our species that we can discover. As to how they’re spelled out in detail – there’s a huge amount of flexibility there. It’s not as if all human beings have to conform to some template. That’s where we differ from other animals. All lions, for example, lead pretty much the same kind of lives. Humans don’t. So clearly a lot depends on choice and culture. But some things are perversions by any standard. Take the Roman habit of leaning over and vomiting on the floor after a meal so that they could carry on eating. I would say that this was a perversion. You’re perverting the natural function of eating, which is to nourish yourself.

We’ve moved all the way from virtue to vice.

Well, yes, I have become interested in the notion of perversion recently.

Edward Skidelsky is a philosopher at Exeter University, interested in ethics, aesthetics and German idealism. His first book, Ernst Cassirer: The Last Philosopher of Culture, was published in 2009. He writes regularly on philosophy and religion for Prospect, the New Statesman and the Telegraph. He is currently working on a collection of essays on ethics. The Language of the Virtues, is forthcoming with Princeton University Press.

Edward Skidelsky is a philosopher at Exeter University, interested in ethics, aesthetics and German idealism. His first book, Ernst Cassirer: The Last Philosopher of Culture, was published in 2009. He writes regularly on philosophy and religion for Prospect, the New Statesman and the Telegraph. He is currently working on a collection of essays on ethics. The Language of the Virtues, is forthcoming with Princeton University Press. 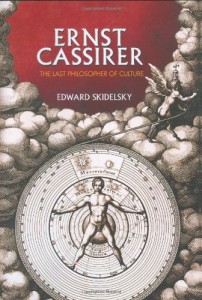