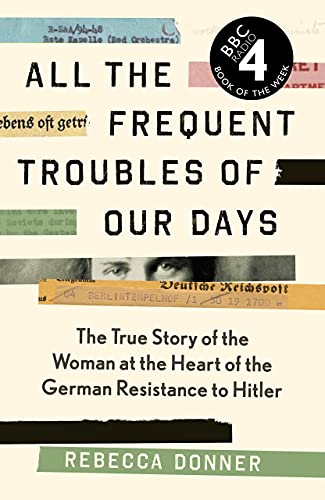 All the Frequent Troubles of Our Days: The True Story of the Woman at the Heart of the German Resistance to Hitler

🏆  Winner of the 2021 National Book Critics Circle award for biography

🏆  Winner of the PEN/Jacqueline Bograd Weld award for biography

The highly acclaimed biography of Mildred Harnack, an American doctoral student living in Germany during the rise of the Third Reich, who became an important anti-Nazi activist and later a spy for Allied forces during the Second World War. Arrested by the Gestapo in Sweden, she was tried by a Nazi military court and finally executed on the orders of Adolf Hitler. In All the Frequent Troubles of Our Days, Harnack’s great-great-niece reconstructs her story in an astonishing work of nonfiction that draws together letters, intelligence documents and the testimony of survivors to create this remarkable story of moral courage.

The astonishing story of Mildred Harnack, an American woman who was part of the largest underground resistance group in WW2 Berlin. Harnack’s great-great-niece Rebecca Donner masterly fuses elements of biography, political thriller and scholarly detective story in this gripping work of nonfiction.