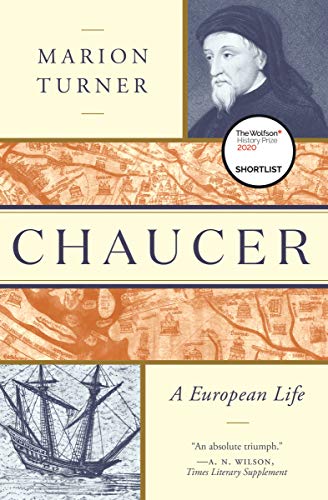 “People who know a bit about Chaucer tend to think of him as the father of English literature—there’s a famous picture of him as an old patriarch, pointing with a rosary—or they think of him as a genial, middle-aged man telling slightly risqué stories in a pub. That’s the popular image of Chaucer. But really, that image came about after his death. In his lifetime, no one thought of him in that way.”

Read more in our interview with biographer Marion Turner on the best books on The Canterbury Tales.

“You might think a study of Chaucer would be a study of literature, but this is history as well as literature. It’s very wide-ranging scholarship, but it’s written in a witty, chatty style and it’s very, very accessible. Marion Turner follows him around on his travels as an official—his daytime job. Chaucer is regarded as one of the fathers of English literature, but what Marion Turner shows, in this deeply researched and highly readable life, is that he was a European figure.” Read more...

“In my biography, I was interested in trying to think about the complete Chaucer, in thinking right across his life: thinking about what happened to him when he was a teenager working in his first jobs in the great household, what happened to him when he was a parent. But one thing that kept on recurring as a foundational aspect of everything that he did, which I think people don’t know much about, is a sense of how international Chaucer was. When he was born, he was living in Vintry Ward in London on the river. You could look into the city or out to the Thames, which was the place where all the ships came in, bringing products from all over the world. At this time, you could buy spices in London that had come from an island in Indonesia, for instance.

His father was a wine merchant. So, right from his early childhood, he was in a very international world. And the poetry that he wrote was international, too. His sources were mainly not English, but in many other languages. He was outward-facing, and he was involved in all kinds of broad international European, and also global, cultural currents.”