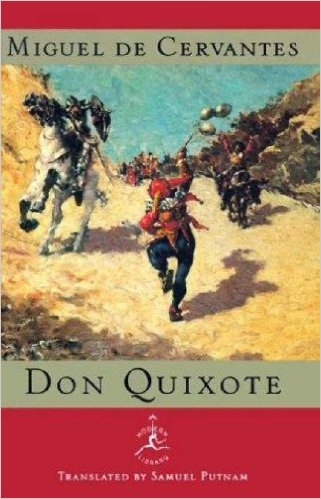 by Cervantes (translated by Samuel Putnam)

“It’s not called the greatest novel ever written for nothing. A few years ago they did a poll of 100 writers around the world, asking what the greatest book was that had ever been written, and Don Quixote was the winner. “ Read more...

The best books on Translation

I have a way of thinking about this that I’ve inherited from a colleague who was very important in the early stages of my career, the literary scholar Ian Watt. Watt thought of the Faust story as a characteristic modern myth. Modern myths are not like those of classical antiquity. Their defining feature is that they are centred on an individual character. There are three such individual characters who generate mythical versions across multiple literary works, pictorial works, operas, poems, and now even comic books. Their stories are constantly being retold and reinvented. They tell us something of our modern, post-Renaissance world. Who are they? The one is Don Quixote, another is Don Juan, the third is Faust.

My way of thinking about these modern mythic figures is to see each as rendering a certain human capacity absolute. They experience that human capacity as the driving force of their life. In the case of Don Quixote, it is the imagination. Don Quixote is in quest of a fantasy world that transcends reality. He lives in the mode of constant imaginary transgression. In the case of Don Juan, the absolutized capacity is, of course, erotic love, acted out in serial transgressions. Finally, with Faust the crucial issue is epistemic transgression, an insatiable desire for knowledge that strives beyond the limits of the human. Those are the three paradigmatic modern myths. And this makes clear what is implied in the wager. Through this ingenious dramatic device, Goethe gives us an account of our modern world in which happiness in the sense of fulfillment in the present is impossible. Our condition is transcendental homelessness. There is no state of the world in which we are complete.

When people talk about post-modernism now, I say, well, how different is 20th century post-modernism to the second volume of Don Quixote—the first novel written in a European language—where you have Don Quixote speaking directly to camera, so to speak—a long time before cameras were invented. He’s reading the second volume of Don Quixote, written by someone else, and complaining about what we might call copyright, though that’s not been invented yet. It has many of the trope of what we call postmodernism, but it was written 300 years before modernism!