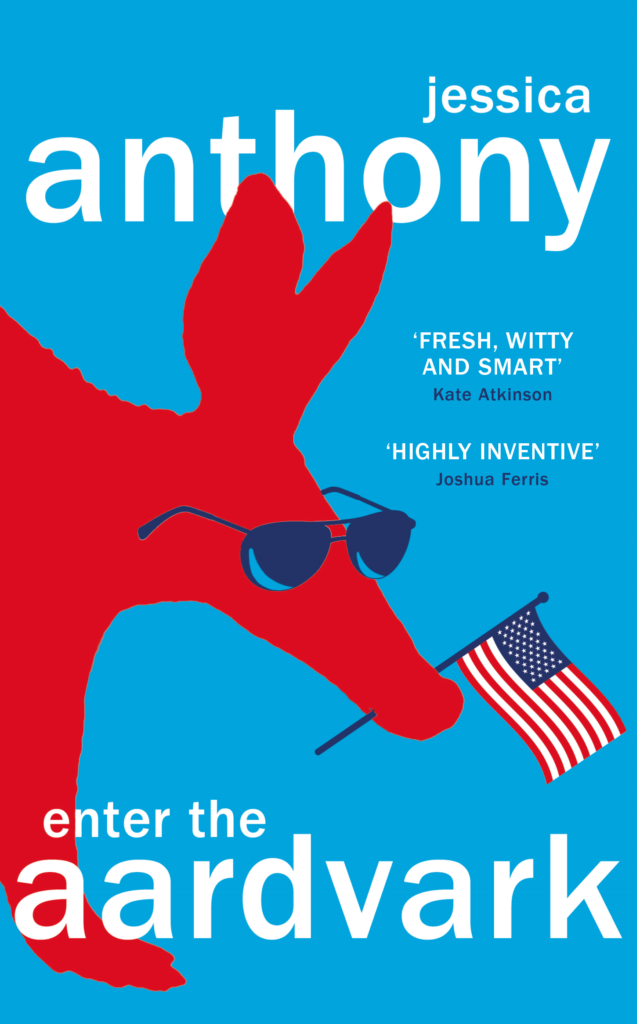 A rollicking work of political satire. Enter the Aardvark lampoons the hypocrisy of the American right, in the form of Republican congressman Alexander Paine Wilson – for whom the arrival of a taxidermied aardvark in the mail triggers a chain of events that threaten to ruin his career. From the author of the critically acclaimed novel The Convalescents and the multimedia love story Chopsticks.

Enter the Aardvark is a witty, wildly imaginative work of political satire. It leaps back and forth between present day Washington, D.C., and 19th-century England, and is launched into action by the mysterious gift of a taxidermied aardvark. Could you tell us a little about the germination of this book, and how it came to be?

The novel began with three words: enter the aardvark. I’ll often write from titles, and this phrase appeared in my mind eight years ago. The surrealist poet André Breton perhaps would have called it a “waking sentence,” the sentence that “taps on the window.” Three years later, in the run-up to the 2016 election, I had a feeling that I would be writing a political novel, and thought the absurdity of “enter the aardvark” might offer some interesting investigation into the absurdity of our modern political climate. I knew little about aardvarks or taxidermy before the novel began, but quickly realized that the novel would follow Alexander Paine Wilson, a GOP millennial congressman whose entire re-election campaign would be brought down by the arrival of a gigantic taxidermied aardvark on his doorstep—and that I would follow the selfsame aardvark back in time, to the year when it was stuffed. A little taxidermy shop in Leamington Spa in 1875, as it turned out.

The LA Times described the book as having “cat’s cradle of a plot,” which I think is a great description. How was it constructed? Did you write one storyline and then the other, then interweave? Did you graph it?!

What’s interesting about a cat’s cradle, the child’s game, is that one piece of string creates patterns. I wrote the first draft in roughly six weeks, without graphs. I almost never plan fiction because fiction so rarely goes according to plan. So I would wake up and write one section, then often start the next few sentences of section to follow which I would write the following day, and so forth. Time, though, as an organizing principle was very much on my mind. The aardvark’s arrival instigates a propulsive sequence of chaotic events for Alex, each worse than the last, leading to political ruin in roughly twenty-four hours. I was as interested in the ways a politician might find himself so quickly at the mercy of America’s media machine as I was interested in methods for Victorian taxidermy. As I wrote, these two men across two vastly different time periods and cultures were speaking to each other, connecting, interlacing, in perpetually thickening and thrilling ways. To complete the analogy, Alex Wilson and Titus Downing, the taxidermist who stuffed the aardvark, belong to the same loop of string.

The present-day passages are written in the second person. Can you say a little more about this decision?

I experimented in first person for Alex Wilson, but was quickly frustrated and frankly bored by his arrogance and insularity. There was no room to breathe. I started messing around with the second person for fun, but began to see how this point of view could work to simultaneously explore the empathy and indictment I felt for Alex. I recall the exact moment I committed to the second person. I said to myself, “Are you really going to do this?” There’s a reason writers avoid the second person. But Alex’s villainy, his vanity, all his woeful flaws, simply felt more honest when I could write them as self-reflections that swiftly shifted into accusations or even ironic self-reflections. The second person is more capacious, perhaps, than many writers realize.

When Donald Trump came to power, a lot was written about how political satire was dead now that the truth was stranger and less believable than any fiction. What do you think?

Donald Trump, in my view, hasn’t killed satire just because he isn’t worth satirizing; Trump would have been impeached from office if the GOP had not decided to, once again, erode basic decency and reason (never mind constitutionality) for their endless and mean pursuit of wealth and influence. The GOP psyche—I have a hard time calling it a mindset—has the power, and it is a power with a personality that remains ripe for satire. There may be a new satiric genre that could emerge, though, from work that identically parrots the political excesses we all have to endure these days, so that the parroting becomes a kind of meta-satire. Acting the actual. I am thinking of the moment I saw Tina Fey perform as Sarah Palin when she simply “acted” on TV the actual verbal salad Palin once spoke.

Do you think that fiction has a role to play in political discourse?

Ideologically we want our politicians to tell the truth and care about the truth. But James Baldwin, who I happen to think is deadly correct, said that only the poets—which is to say all writers—can tell the truth about us. The novelist or poet is beholden only to their reader. And truth emerges in a novel or a poem only after the reader has already been persuaded, lulled, into immersion. This rarely happens if a novel is polite or civil because a work of art is an emotional experience, and our emotions are what we try to keep in check with civility. If a novel has told the truth, it really has little to do with the writer and everything to do with the reader. The reader understands that what they have read is true. To achieve this, the novelist understands that they cannot, and should not, write for everyone. Vonnegut sagely advises: “If you open a window and make love to the world, so to speak, your story will get pneumonia.”

Politicians, unlike writers, are asked to represent everyone, which means political discourse, when it’s effective, demands a certain degree of civility. Politeness. Which means that they really can’t tell the truth, not if they want to be civil. The best political leaders understand this problem—it’s a problem of audience—and I suppose recognize their limitations. When they speak, they elect instead to simply inspire others to tell the truth, and fight for it.

Your biographical note is very intriguing: “Anthony has been a butcher in Alaska, an unlicensed masseuse in Poland, a secretary in San Francisco.” What led you to writing?

Writing was the only thing I could ever do. I was also woefully in need of money. I spent six years after college working odd jobs, and lived in Alaska, San Francisco, Poland, Prague, New York City…I’ve had over 25 jobs. I was wandering as a writer and as a person. My favorite job was teaching English to Czech businessmen in a chateau in northern Bohemia. Beer was served at breakfast. I was working with a riotous group of American and British teachers who called themselves the “Rhinoceros School.” We Rhinoceri would teach at the chateau (a very loose definition of the word) in ten-day intensives, and the rest of the time we were back in Prague, and I could work on stories. I would have been a Rhinoceros longer, but the school closed because the director discovered he could make more money investing in a miracle cleaning fluid. As it goes.