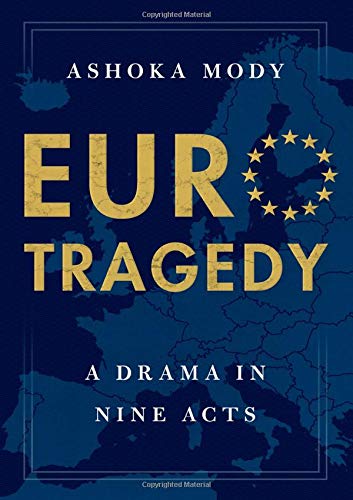 Professor Ashoka Mody, a former deputy director of the IMF’s Europe department, charts the history of the EU’s single currency from the birth of an idea in the 1960s, to its creation at the end of the century and the 2008-13 financial crisis, which brutally exposed the currency’s weaknesses.

Has the euro been a success as a currency?  The recently retired President of the European Commission, Jean-Claude Juncker insisted in his 2016 State of the Union address that through the financial crisis “the euro stayed strong and protected us from even worse instability” and that the euro “brings us huge, often invisible benefits”.  Such apparently wishful thinking is remorselessly skewered by Ashoka Mody in Euro Tragedy: A Drama in Nine Acts.

Mody shows how, from the outset, the euro was built on economically shaky ground.  Early plans to increase the budget of the European Commission to facilitate monetary union were abandoned as politically unfeasible.  Rules on deficits and debt-to-GDP ratios were bad economics and broken by all, largely without sanction, from the outset.  When Eurozone countries ran into difficulties after the 2008-09 financial crisis debt forgiveness on any meaningful scale was ruled out.  The ECB was, from the outset, and by design, put largely beyond political control.  In the wake of the financial crisis, in stark contrast to the Fed, it was timid in its response.  The ECB’s caution was exacerbated by the inability of the EU as a whole to deal with its large, inefficient and (more or less) insolvent banking sector.

The list of mistakes, missed opportunities and structural limitations goes on and on.  Mody, who used to be the IMF’s deputy director of European research, details them all lovingly.  The Eurozone was not an optimal currency zone at its inception and it remains highly sub-optimal even now.  This book is an excellent introduction to the creation of the euro and, in particular, to the troubled first two decades of its existence.  Anyone who wants to understand the Eurozone crisis can do no better than to start here.

But there is one weakness in this story.  At the end of the book Mody suggests two possible paths that the euro could take to overcome its structural problems.  The first option, is that Germany could leave the bloc.  Germany would remain solvent if it left the euro.  The currency would then depreciate, helping its struggling members.  The second solution he proposes is a one-off debt forgiveness for Greece and the abolition of measures to limit spending by member states—the so-called Stability and Growth Pact (SGP). If Eurozone governments overspend and can’t pay, they should just default, with private sector creditors bearing the losses.

Both these suggestions make perfect economic sense, but they would overturn the political purpose of the euro and compromise the political culture of the EU.  Mody argues convincingly that French anxiety about Germany’s industrial outperformance was the key driver in putting in train plans for a single currency from the late 1960s.  Of course, the euro has done nothing to disguise Germany’s industrial pre-eminence, but Germany leaving the euro would emphasise it in the most brutal and un-communautaire-like fashion.  Similarly, leaving countries to default would compromise any sense of community-wide solidarity.  Mody’s suggestions may be good economics, but they are not workable politics.

These solutions point to a broader weakness in the book’s political story—why Germany, having long been sceptical, came to support French ambitions for a single currency.  The key figure is Helmut Kohl, German Chancellor from 1982 to 1998.  It was he who, in the wake of German reunification, began actively to support full monetary union.  He sold it to his compatriots on the basis that it had “German” characteristics—most particularly, a central bank uncompromisingly devoted to maintaining price stability, rules on limiting government debt and a clear understanding that there would be no transfers between countries.  As Mody makes clear, these arrangements didn’t make much economic sense and, at the time, most Germans, including the president of the Bundesbank, remained sceptical and wanted to keep the mark.  Kohl had long shared this scepticism about the single currency and Mody admits to being mystified as to why Kohl suddenly changed his mind, dismissing (convincingly) Kohl’s insistence that the single currency would ensure “peace” as ludicrous.  He also makes clear that the single currency was not the French quid pro quo for supporting German unification.  There was no such deal.

What had changed to make Kohl change his mind and abandon German resistance to French plans for monetary union?  French scepticism about the merits of European economic integration and anxiety about German supremacy are apparent on every page. Even at the very foundation of the European Economic Community (EEC) in 1957, France insisted on the common agricultural policy (CAP) as its price for bringing down tariff barriers.  President Pompidou first suggested a single currency in the early 1970s to maintain Franco-German parity.  He supported British entry into the EEC in the early 1970s as a counterweight to German industrial domination.  In the late 1970s, Giscard d’Estaing, the then French president, pushed the European Monetary System “to make France the equal of  Germany”. A few examples, but there are plenty more.  Was it possible that Kohl felt that German reunification did not threaten peace immediately, but that it did threaten French commitment to the European Union, by making an absurdity of any idea of Franco-German parity?  Maybe he saw accepting the single currency as a way of seeing off growing protectionist demands from France, or weakening political commitment in the face of German supremacy.  Perhaps German support for monetary union was not to ensure a European Germany, but to ensure a European France.  Of course, he wouldn’t have been able to articulate any of this openly—hence the politically visionary language.  Perhaps these are the “invisible benefits” that Jean-Claude Juncker was referring to in 2016.

Whatever the truth of the matter, there is a story to be told about the creation of the euro that focuses on the politics over the economics.  Only then will we be able to assess fully whether the Euro is a “tragedy”.  Mody sees the Italian economy as the weak underbelly of the euro, but perhaps French politics is its Achilles heel. This book, comprehensive as it is in many ways, feels like only half a story.