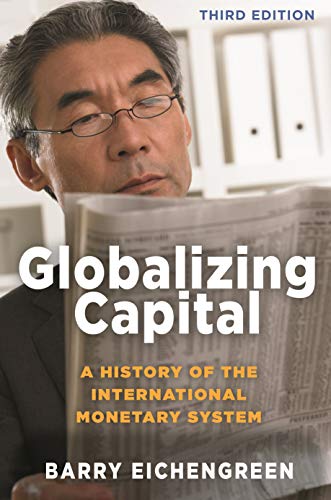 Globalizing Capital by economist Barry Eichengreen is now in its third edition, updated to include the global financial crisis, the Greek bailout, the Euro crisis and the rise of China as a global monetary power.

In the 1972 film Cabaret, set in the politically volatile world of Germany’s Weimar Republic, the wannabe star Sally Bowles (Liza Minelli) and the cabaret’s master of ceremonies (Joel Grey) sing a duet, ‘Money makes the world go round’. The verses contrast the easy lives of the rich with the poor, hungry, cold and loveless lives of the moneyless.  In Germany catastrophically high inflation in the early 1920s had rendered money almost valueless.  Money had completely ceased to do its work of making the world go round and millions were impoverished as a result.  Even in the victorious countries, Britain and France, there was significant inflation after the war, which had a very dislocating effect.

To counter this state of affairs, the world sought to resurrect the gold standard in the hope of returning to the pre-war world of sound money and free and frictionless international trade. But, as Barry Eichengreen explains in Globalizing Capital: A History of the International Monetary System, the restoration of the gold standard did not restore the stability of the pre-war world because, in important respects, the world had changed. Some countries (Britain) joined at too high a rate, subjecting their economies to deflationary pressures and high unemployment. Others (France) joined at too low a rate, leaving them with structural current account surpluses. Adjustments to how the arrangements worked were difficult because the various participating countries did not have a common view of the system’s shortcomings, or lacked a common interest in taking any given course of remedial action.  Slowly, over the course of the late 1920s and 1930s, the gold standard was abandoned as, country-by-country, its participants dropped out and devalued.

As Eichengreen argues in Globalizing Capital, it wasn’t the gold standard’s natural tendency to maintain equilibrium per se that had worked well in the late 19th and early 20th  century. In fact the system was subject to various shortcomings and was hit by the odd crisis. What made the gold standard work in its golden era—roughly 1870-1914—was the common interest of its largest participants in making it work and their ability to be flexible around the rules of the game in order to keep the game going. When financial institutions collapsed in Britain, threatening a general bank run, other countries happily came to the Bank of England’s rescue in order to preserve the lynchpin of the system. All participants were focused on one objective, maintaining convertibility to gold, and everyone trusted everyone else to maintain that exclusive policy focus. After the First World War, partly as a result of increased domestic political pressure in all countries to tackle unemployment and improve social provision, it was simply impossible to maintain exclusive focus on this one objective. The ‘system’ collapsed.

Globalizing Capital: A History of the International Monetary System should more properly be called A History of International Monetary Systems—plural.Eichengreen explains the evolution of the gold standard and how it worked comparatively smoothly until it was abandoned under the pressures of war.  He then looks at how the resurrection of the gold standard in the 1920s failed.  Then he moves on to the establishment of the post-World War II system, Bretton Woods, which lasted until the 1970s, when it foundered on the reluctance of the United States to maintain its gold peg in the face of financing requirements for government spending at home and fighting the Vietnam war. The Bretton Woods system, the essence of which was to maintain exchange rate stability by limiting currency convertibility, like the gold standard, functioned in spite of itself.  It was not the careful calibration of current and capital account imbalances and the role of the newly-created IMF that kept Bretton Woods functioning, but rather the common interests of the West in the face of the Soviet threat.  Strong post-war levels of growth helped too.  So it was the right combination of a hostile external threat and benign domestic environments that allowed it to function, rather than ‘the system’ itself.

The other evolution in the international system that Eichengreen discusses at length in Globalizing Capital is the history of European monetary union, which was born in the wake of the failure of the Bretton Woods system to manage exchange rates.  He charts the various mechanisms the EU (or its previous incarnations, the ECC and the EC) built to manage exchange rates in the 1970s, 1980s and 1990s, the extent to which these worked and how and why they foundered. He goes on to tell the story of how full monetary union was adopted and engineered in the 1990s under plans fleshed out by the then President of the European Commission, Jacques Delors.  In the wake of the Eurozone crisis (at its most intense from 2010 to 2012), when Greece, Cyprus, Ireland, Spain and Portugal all had to seek bailouts from the IMF and their fellow EU states, the shortcomings of the Eurozone as an optimal currency area were cruelly exposed. But Eichengreen stresses the political solidarity and common interests that allowed the Eurozone to pull through.  Again, as with the gold standard and Bretton Woods, the system worked, not because the ‘system’ was flawless, but because there was enough common interest for the disparate members to develop mutually agreed policies to support it, without unmanageable political strain. As Eichengreen points out, other plans for monetary union, in Latin America and south-east Asia have failed to get any kind of traction, because the requisite commonality of political interest is simply not there.

Eichengreen ends by talking about the future. Increasingly, we live in a world of floating exchange rates, with the dollar acting as the global sheet anchor of the international monetary system. The growth in the volume of global trade, and the size of capital flows, are making it harder and harder to defend currency pegs. The biggest challenge for the international monetary system as it now exists is to accommodate the rise of China. The dollar’s pre-eminence was only reaffirmed during the global financial crisis, when there was a rush to move into dollar denominated assets during the storm.  But as renminbi convertibility increases, as it must, it will play an ever greater role in the international monetary system.  The million-renminbi questions is how the rest of the world will seek to accommodate it when it is fully convertible. As the stories of the gold standard, Bretton Woods and the Eurozone suggest, there will have to be mutual political interest underpinning arrangements if the dollar and the renminbi are to exist in some kind of mutually beneficial symbiosis. Eichengreen does not suggest what such arrangements might look like and it is surely too early to tell.  What will be the consequences of President Trump’s trade wars with China? Is China’s more authoritarian political direction under President Xi Jinping an impediment to US-China cooperation on the monetary front or not? Is a policy of ‘America First’ compatible with the kind of mutual international support that has been the hallmark of all hitherto successful international monetary systems? Eichengreen doesn’t claim to  have an answer to any of these questions, but this excellent book makes one thing very clear.  In good times, it looks like money makes the world go round, but the bad times always show that it is the world, acting through mutual interest and collaboration that makes the money go round and no ‘system’ or model will make the money go round if it is not based on that deeper interest.

“What I like about this book is the clarity with which it describes certain dilemmas that financial globalisation creates.” Read more...

The best books on Globalisation

Other books by Barry Eichengreen 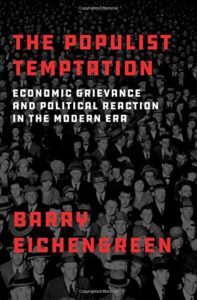 The Populist Temptation: Economic Grievance and Political Reaction in the Modern Era
by Barry Eichengreen 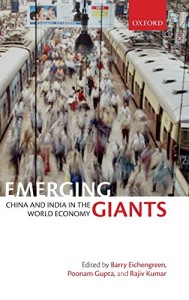 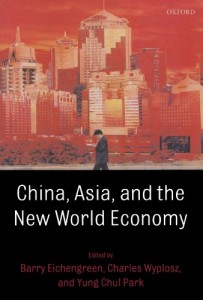 China, Asia, and the New World Economy
by Barry Eichengreen 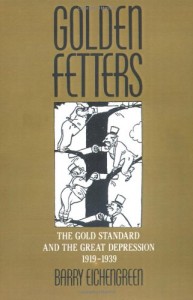 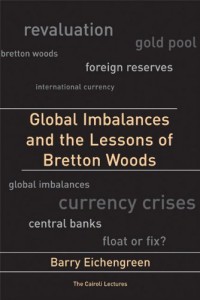 Global Imbalances and the Lessons of Bretton Woods
by Barry Eichengreen