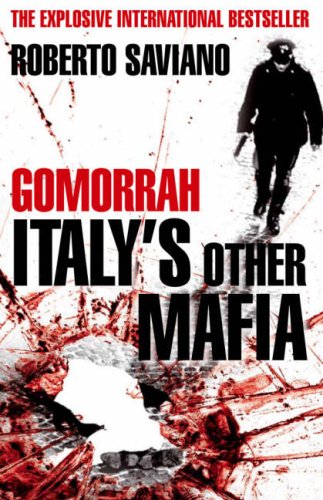 Please tell us about Roberto Saviano and his book Gomorrah, which has left him living in fear for his life.

Roberto Saviano is a young Neapolitan journalist and the author of Gomorrah, which is about the Camorra. As a result of its success and his public pronouncements against them, he was condemned to death – there was phone tap evidence that the Camorra planned to kill him. So he, like an awful lot of other people in Italy, is living under armed guard.

This is a book with many virtues and one or two faults. It’s flawed, but I think that only this book could have made the impact that it did at the time that it did. It was also a book that desperately needed to be written. For a long time the Neapolitan Camorra was much more difficult to write about than the Sicilian mafia. The Sicilian mafia makes good copy – you’ve got the Godfather and the figure of the boss of bosses – and is easier to write about. As I have said, the Camorra is a much messier phenomenon – it’s a name for all sorts of gangs that come and go. Nobody – even in Naples – has more than a very partial idea about what’s really going on and this makes it very difficult to alert the public to just what a danger it is.

Saviano is viscerally enraged and disgusted at what the Camorra is and what it’s doing. The book has a colour, noise and emotional power in its descriptions that had a huge impact and helped create a public sense of the importance of legality and the fight against organised crime in Naples and Campania in the same way that Falcone and Borsellino did in relation to Sicily in the 1980s and 1990s. It has made the Camorra into a national issue, which is exactly what it should be. The Camorra is a national phenomenon. Its politicians sit in the national parliament and government. It runs trucking and construction companies that are in business right across the country. It is involved in drug trafficking across Italy. These are national problems, not just Neapolitan folklore. It took Saviano to raise public awareness of this.

But research has taken some of the shine off this book, showing how he rather fictionalized some aspects of it—though some are very real. Saviano has never quite been straight about it. He calls it things like a ‘nonfiction novel.’ I’m not sure what that means. It’s not quite a novel, but it’s not reportage. And he’s never come out and said, ‘Look, there are some bits I made up because they communicated the atmosphere; it’s about my impressions’—and placed more of the emphasis on the fiction, because he has come to be seen as something of an oracle and the voice of truth. So this book defined a moment really. It put the Camorra back on the agenda and made people able to imagine the Camorra, this rather more chaotic world of the Neapolitan mafia.

Also, it’s badly translated into English. Apart from the ugliness of the prose, the translator has people robbing banks with air rifles and driving tanks down the streets of Naples rather than bulletproof cars – all sorts of silly mistakes. Also, the figures quoted in lire in the Italian version are converted directly into euros in the English version – so a billion lire becomes a billion euros, which is completely wrong. So the translation does turn some of the book into nonsense. Saviano’s prose is also difficult. If you look at it in the cold light of day, some of it is a bit over the top.

I just finished his later book Beauty and the Inferno, which makes me feel guilty for touching anything Italian in my local supermarket lest it be tainted with the blood of mafia victims. what I find so shocking from reading his books is that this widespread and brutal criminality is still going on – for example, toxic waste being dumped across southern Italy by the Camorra and giving people cancer.

Before Saviano, the people who knew about this just hadn’t found a way to break through and make people understand. They sure understand now. That’s the enormous merit of this book. Its strength and weakness is that he puts himself at the centre of the story – that’s what holds it together in this diffuse, confusing, chaotic, violent, amoral world of organised crime. He puts his own reactions and his own persona at the centre of it. That can be seen as producing a cult of personality and he’s attracted some criticism for that. But it’s precisely that tactic that gives the book its immediacy and allows you to feel his disgust.