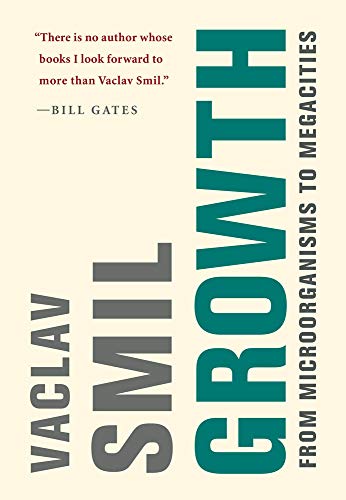 Growth: From Microorganisms to Megacities

Growth: From Microorganisms to Megacities is the latest book by Vaclav Smil, Professor Emeritus in the Department of Environment and Geography at the University of Manitoba. A lifelong interdisciplinarian, in Growth he examines a wide variety of phenomena, “from microorganisms to megacities”, taking in plants, crops, animals, humans, energy sources, manufactured goods and more along the way, looking at all of them in just one particular dimension – how they grow.

The result is a thought-provoking analysis of some of the challenges facing humanity in the 21st century, such as energy transition and population growth. He also uses this approach to raise questions about cherished economic objectives, such as the quest for constantly high GDP growth. He argues that in a finite material world such growth must, necessarily, have its limits. Smil makes no attempt to cast the implications of this in a positive light. The book is a sobering as well as a fascinating read.

You’ve written a lot about energy transition and other issues that you deal with in your book, Growth. Could you tell us a bit about why you decided to write a book specifically devoted to studying growth? What was the puzzle that you thought needed to be explained?

What are the characteristics of growth that different organisms and entities exhibit?

The main one is that it comes to an end, which is a difficult concept for economists to grasp. Economists are the only people who think that growth can go on forever. The economy is finite and there is a misunderstanding of the basic algebra. They think GDP growth of 1% is poor and that it should grow at 2%, 3% or 4%. Yet the base has expanded so much that small rates of growth represent a lot of additional output. The US is more than a $20 trillion economy. A $20 trillion economy growing at 1% grows by more than a $2 trillion economy growing at 5%. But they still want 5% even at $20 trillion dollars. It’s difficult to deal with this mentality.

Could you explain just a bit about the particular shapes of distributions of growth that you are exploring?

There are all kinds of growth patterns, but they all come to an end. For many processes in nature the s-shaped (logistics or sigmoid curve) is common. Slow-fast-slow. First, things grow very slowly, then they pick up and there’s a period of rapid expansion, but then it slows down as the process matures.

What follows depends. We humans we reach our fullest growth by the age of 17, 18 or 19. Then we stay on that main line for decades and decades. That’s the individual’s trend. Collectives survive because of offspring, but collectives must end, too, because this is a finite planet. You cannot have an infinite number of mice or deer or people or economic product.

You end the book on quite a polemical note. It isn’t just the economists that you think are over-optimistic?

No, there are all these people around Silicon Valley—these high-tech people—who have this notion that things will grow so fast that there will be a ‘singularity’ where all this artificial intelligence and all these electronic machines will contribute to an ever accelerating growth rate, so that by 2047 inventiveness will be expanding at the speed of light.

Can you just explain a bit more what these people mean by the singularity?

This is a notion which, as I say, is utterly mind-boggling. Of course it’s never going to happen. It can never happen. But this concept is taken quite seriously by many people.

To what do you attribute that?

The explanation is easy. They’ve been taken in by Moore’s law. The crowding of components on a micro-processor has been growing very rapidly since 1965. It’s growing at around 35% a year, so it’s doubling every two years. If you continue this, you will eventually reach some astronomical level.

But the point is that nothing else in this world is growing at 35% every year, year after year, and the growth in the crowding of microchips has to come to an end. These people are swayed or misled and they become true believers. This is the old classic problem of taking a small part of human experience and saying: “This is the totality of human experience. Everything will be expanding like that.” But nothing expands like that for ever.

We are a very inventive species. So things are always getting better. Crop yields are rising. Everything is more efficient. Our engines are more efficient. Our houses are more efficient, but all these improvements in industry and agriculture in medicine are improving at 1%, 2% or 3% a year. This is what I call their categorical mistake. They have mistaken the rapid advance in electronics based on crowding of components on microchip for the rest of the world. But it simply doesn’t apply.

I think you would hold that we’re not even in the most transformative industrial period of the world? You think the late 19th century was much more transformative.

Yes, indeed. That is my argument. Robert Gordon from Northwestern University, who’s an economist, is the only other guy who’s seriously pushing this idea. People dislike it because they think this is the most inventive period ever but it just isn’t. Robert Gordon and I have done our homework.

Take electricity for a start. We cook with it, we have electric trains and most industrial processes run on electricity. The widespread exploitation of electricity for light and power began in the 1880s. Then in the same decade you have the invention of steam turbines, automotive internal combustion engines and the discovery of aluminium smelting, little later diesel engines and the discovery of ammonia synthesis, which feeds humanity. All these things precede 1913. The underpinnings of the 20th century were created between 1860 and 1913 and they were transformative.

I’m not saying that there has been no progress. On the contrary. There’s been tremendous technical progress since 1913, but there have been very few fundamental discoveries outside silicon-based electronics and, you might argue, nuclear power. So I would argue that this is not the most inventive period of human history.

And I think you would argue that technological inventiveness is not going to save us because although lots of growth is dematerialized that, too has its limits.

Yes. We are constantly and slowly dematerializing. If you are of a certain age you will remember the first metal cans for beverages, for Coke or for beer. These cans were steel and they were relatively very heavy. Then we made them from aluminium and the cans got lighter, but then we made the aluminium skin thinner and thinner. Yesterday I bought a beer in a can to use for baking rye bread. I was astonished when I emptied the can to feel how light it was. The can is like a skin, like a peach’s. But we cannot now make it any thinner because you still have to have some aluminium. So dematerialisation is always only relative. It cannot be absolute. We cannot have a can of beer with no aluminium.

That’s what these people don’t take in to account—efficiency has its limitations. To give another example, when you burn wood in an open fire it is, say, 5% efficient, most of the heat gets lost. An old coal stove may be 20% efficient, a good old stove 40%, early natural gas furnaces were maybe 60% efficient. I have a natural gas furnace in my basement, which is 97 percent efficient now, but that’s going to be about it. You cannot make it 300% efficient. When talking about dematerialization and lower energy intensity people get relative and absolute quantities confused. They see some process going down or up or getting better and better but that process always has its limits.

And that that is a problem for us when we’re thinking about solving our ecological problems?

I decided early on in my career that I would never make forecasts about dates and volumes. These forecasts always turn out absolutely wrong. I like to describe the lay of the land and then, from that, you can think about what is possible. One thing is clear, no matter how often Greta Thurnberg sails in her carbon-free boat (by the way, it is not, propulsion may be by wind but it took plenty of carbon to make its plastics), this is going to be a fossil fuel economy for a long time to come because you just cannot get rid of 10 billion tons of carbon overnight. It’s just simple kindergarten maths. And on top of that the infrastructure of the energy industry, all these tankers all these oil and gas fields, steam and gas turbines, high voltage lines, electric power plants, all these furnaces, all these electric cookers,  all the cars all the planes and everything else constitutes investment of trillions and trillions of dollars. So you cannot just dump it and walk away. We are what we are. We are a fossil fuel civilization.

So what’s the shape of things to come?

It’s more of the same with slow gradual changes. We will eventually decarbonise, Greta or not, but it will not be 2025 or 2030. We can speed it up if we like but we cannot just do it by next Monday. This fossil fuel world is so embedded and its scale is so large that changing it is like turning a giant 300,000-ton tanker round, its turning circle is two or three kilometres. So we are a like a 7.5-billion people, $100 trillion-dollar global-economy tanker. You cannot turn it around on the proverbial dime. That’s the forecast.

But we won’t necessarily sink?

No, exactly. We are a very inventive species. And then when we are, as the British say, in a real pickle, we become really creative.

People ask me if I’m an optimist or a pessimist. I say, I’m an old-fashioned scientist. I don’t deal with these categories. So far we’ve done pretty well but we may totally screw up and it may all end badly. But I think we will pull through. Our problems are certainly more complicated and more difficult now than at any time before simply because of the scale of the problem. That’s what I would emphasize again and again. People just don’t realize the  unprecedented scale of what we’re trying to deal with.

Other books by Vaclav Smil 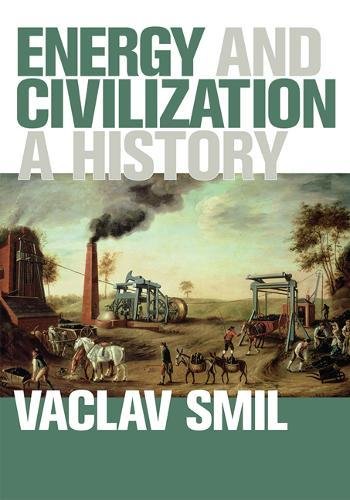 Energy and Civilization: a History
by Vaclav Smil 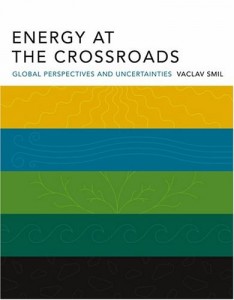 Energy at the Crossroads
by Vaclav Smil