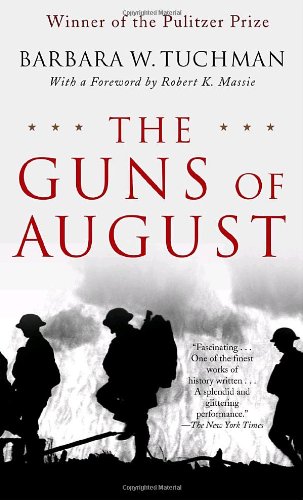 The Guns of August

A book about the outbreak of World War I told as a story, opening the door to a golden age of narrative history in the decades since it was published.

“We really live in a golden age of narrative history. Because of the popularizing of history, we began to get back to history as storytelling. Many people give Barbara Tuchman credit for being the person that did that. She was not a professional historian. She was incredibly well-educated and well-read and researched everything you could possibly research, but she wrote it as a story. The historian Margaret Macmillan said that reading Tuchman, when she was a graduate student, was like history going from black-and-white to Technicolor. That’s what narrative history does for you.” Read more...

“For many people, it is the ultimate old-fashioned diplomatic history. But it enthuses me for several reasons. First of all, it’s an extraordinary narrative. It reads magnificently and is a breathtaking horizon of events and people. Secondly, like me, she is obsessed with people. In the first chapter we have the funeral of Edward VII in 1910, which is attended by 10 European kings. She uses this funeral as a way of demonstrating the fundamental contradiction of pre-war Europe, in which increasingly bourgeois, urban, sophisticated industrial societies remained none the less monarchical, with only France as a major Republican power. Militarism and court cultures intermingled to an extraordinary extent.What Tuchman does so well is to document the kind of thought patterns that pervaded the many national rivalries, which was all to do with imperialism, social Darwinism, but, above all, military planning and strategy. Again, what I love about this book, and in this way there’s an affinity between Tuchman and me, is that it describes the importance of irrational forces and charts their implications.” Read more...

The best books on The Dreyfus Affair and the Belle Epoque

“So gorgeous was the spectacle on the May morning of 1910 when nine kings rode in the funeral of Edward VII of England that the crowd, waiting in hushed and black-clad awe, could not keep back gasps of admiration. In scarlet and blue and green and purple, three by three the sovereigns rode through the palace gates, with plumed helmets, gold braid, crimson sashes, and jeweled orders flashing in the sun. After them came five heirs apparent, forty more imperial or royal highnesses, seven queens—four dowager and three regnant—and a scattering of special ambassadors from uncrowned countries. Together they represented seventy nations in the greatest assemblage of royalty and rank ever gathered in one place and, of its kind, the last. The muffled tongue of Big Ben tolled nine by the clock as the cortege left the palace, but on history’s clock it was sunset, and the sun of the old world was setting in a dying blaze of splendor never to be seen again.”—Opening paragraph of The Guns of August, by Barbara Tuchman.

Opening lines of The Guns of August by Barbara Tuchamn

Other books by Barbara W Tuchman 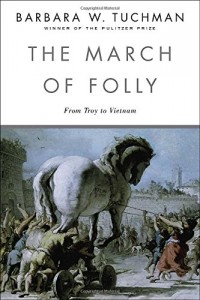 The March of Folly
by Barbara W Tuchman