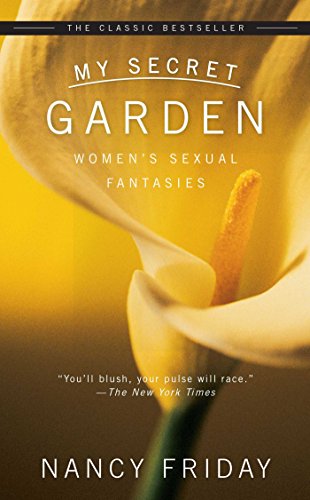 A. Susan Quilliam: I was in my early 20s when this came out and I read it almost immediately. It’s the first book about real women having sexual fantasies, and it refuted many ideas about women’s sexuality. It put into women’s mouths the claims that Kinsey and Masters and Johnson had made, that women are as sexual as men are, which had almost been forgotten.

It’s a very, very touching book, because real women are talking about real fantasies. And some of them are outrageous: some of them are sadomasochistic, some of them are lesbian. It came out at the height, not so much of the sexual revolution, but the liberalism of the 70s. And it’s a very moving book, because women are feeling sufficiently confident and sufficiently empowered to talk about their own sexual fantasies. I think it’s a book that probably changed many women’s lives. And also started to help men to understand that women have as voracious and as imaginative a sexual appetite as they do.

It was also just a year after The Joy of Sex, so part of a group of books coming out on sex in the early 1970s – really the first era where sex books were up on the shelves, and almost become brand names. If you say My Secret Garden to anyone my age, they’ll go, ‘Oh yes, that’s the women’s fantasy book!’

There have now been updates of the book. There was the Emily Dubberley book, Garden of Desires (2013), which was a deliberate rewriting or updating of My Secret Garden.

Q. Part of the importance of Nancy Friday’s book was that women realized having sexual fantasies did not make them abnormal. Is fantasy now accepted as a normal part of sex?

A. People are a lot more relaxed about fantasy now. As an agony aunt, I’m no longer getting letters asking, ‘Is it alright to fantasize?’ I can’t remember the last time I got one. I will occasionally mention it in passing in an answer but it’s not the big thing that it used to be, where people thought that if they fantasized they were being perverted or unfaithful.

Q. Is fantasy an important part of sex for a lot of people?

A. I think it probably is, though we’re getting quite wary of not being ‘in the moment’ in sex. The accusation now would not be, ‘sexual fantasy is perverted,’ but that you need to be connecting with what’s happening in real life. There is a very healthy awareness nowadays that pornography is taking us outside real experience and setting up fantasies about how sex should be. Fantasy also separates you out, but I think we have worse things to worry about.