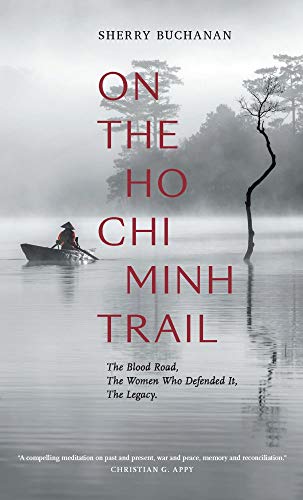 On the Ho Chi Minh Trail

The Ho Chi Minh Trail was the quasi-mythical network of roads, paths and tunnels that North Vietnam used, in its war against South Vietnam and the Americans, to transport military supplies to its supporters in the South, the Viet Cong. On the Ho Chi Minh Trail is a travelogue, charting American journalist, author and publisher Sherry Buchanan’s trip down the trail in 2014, collecting the stories of the young women who played a vital role in keeping the trail open despite the constant American bombing. The book includes pictures of Vietnamese war art, maps and an itinerary (in case you want to follow in her footsteps!) and brings all of the author’s knowledge of Vietnam to bear. It includes a photo of the author meeting with Võ Nguyên Giáp, the mastermind behind Vietnam’s victory against both the French and the Americans, in 2006.