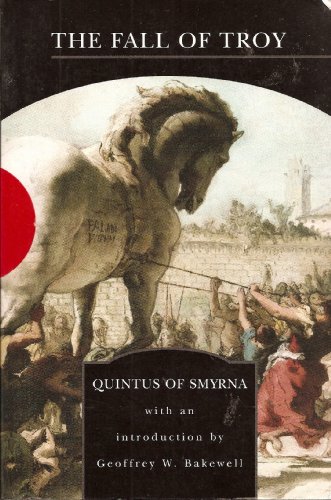 “When godlike Hector by Peleides slain
Passed, and the pyre had ravined up his flesh,
And earth had veiled his bones, the Trojans then
Tarried in Priam’s city, sore afraid
Before the might of stout-heart Aeacus’ son:
As kine they were, that midst the copses shrink
From faring forth to meet a lion grim,
But in dense thickets terror-huddled cower;
So in their fortress shivered these to see
That mighty man.”

For the Posthomerica by the Greek poet Quintus Smyrnaeus, which dates from the 4th century, we’ve listed Arthur Way’s translation. It was recommended by British comedian, actor and author Stephen Fry for its entertainment value, but—as one critic put it—dates from 1913 and “is occasionally harder to follow than the accompanying Greek text.” If you prefer an updated translation, another option is The Trojan Epic: Posthomerica, a translation by the late Alan James.

“The most useful source for everything about Troy is probably Quintus Smyrnaeus, a 4th century AD Greek writer whose Post Homerica is a fabulous source for everything that took place after Homer leaves the story. I relied on a hilariously over-poetical translation by the prolific Arthur Sanders Way, who in a long life (1847-1930) translated just about every classical work he could lay his hands on” Read more...