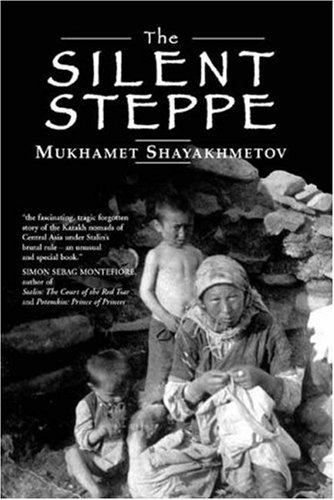 The Silent Steppe: The Story of a Kazakh Nomad Under Stalin

This is a firsthand account, matter-of-fact in tone, by a Kazakh herder of his life growing up in 20th century Kazakhstan. Born in 1922, Mukhamet Shayakhmetov’s life revolves around his ‘aul’, the traditional Kazakh family grouping that is both abstract and the collection of yurts that moves around between winter and summer—with herds of camels, horses, cattle and sheep. He is just 7 years old when Stalin’s campaign to dispossess the kulaks reaches Altai in 1929, netting first his uncle and then his father. By 9 he is acting as the man in the family, going long distances on horseback on his own to get food for his father in prison. He manages to survive both the Kazakh famine and the Great Patriot War, fighting in the army at Stalingrad. It’s a tragic tale, the lack of comprehension of the Kazakh herders at what the Soviet bureaucratic state was up to painful to read. Early in the book, when the political persecution is just getting going, he’s at a trial and notes how everyone was astonished by the proceedings: “some even dared to laugh.”