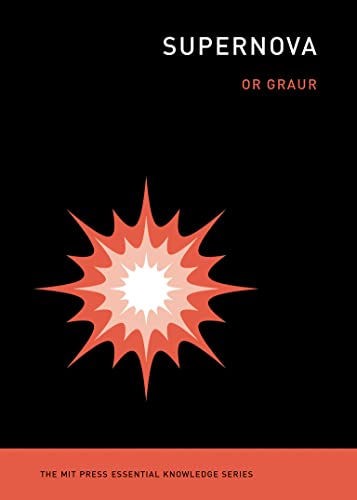 In his book Supernova Or Graur, Senior Lecturer in Astrophysics at the Institute of Cosmology and Gravitation at the University of Portsmouth, introduces his field. Graur does research on Type Ia supernovae but has also spent a lot of time doing public education and outreach, including working with high school students. The book is interesting, informative and very clear. It makes you want to go out and look at the night sky.

Q. What is a supernova? Will I have ever seen one?

Or Graur: Supernovae are explosions of stars. There are lots of different types of stars and depending on how massive they are, some will be hotter or colder, bluer or redder, larger, smaller, and so on. Depending on their mass, they will develop over time and then die in different ways. A supernova explosion is one way to die. It’s usually reserved for stars that are about eight times the mass of our Sun, but there are exceptions.

You would never have seen a supernova with the naked eye. The last supernova that was visible to anyone on the street was in 1604, so it’s been a while: more than 400 years. Now, when we say that we observe supernovae it’s mostly with telescopes. But we are waiting. Some night—maybe tomorrow, maybe 200 years from now—there’ll be another supernova in the Milky Way galaxy that we can see. That would be quite a spectacle.

Other than the spectacle, could you say why supernovae are important? In the book, you say it’s one of the most exciting fields of astrophysics. Could you explain why that is?

It’s exciting for astronomers because supernovae happen on human timescales. If you study galaxies, you’re studying snapshots of things frozen in time because galaxies change over millions and billions of years. Supernovae, on the other hand, change every day: suddenly they’re there and you can watch how they get brighter, and then fade over time. It all happens now.

Also, as I said, supernovae are the endpoints of how stars evolve. By studying them, you learn a lot about the stars themselves.

Then there are all the ways in which they interact with other astronomical phenomena in the universe. They shape galaxies, they can blow huge holes in the gas between stars: our Sun is currently moving through such a cavity, called the Local Bubble. They can even get to a point where they blow gas out of the galaxy: it looks like a huge fountain. They are also responsible for the creation of most of the heavy elements in the universe, and their dispersal. If it wasn’t for supernovae, heavy elements would just stay locked in stars, in which case there would be no carbon or iron or everything else that we are made of.

For astronomers, they’re also exciting because we can use them as tools for experiments. Astrophysicists don’t have laboratories. Unlike other physicists, I don’t have lasers; I can’t go and buy an oscilloscope and do something with it. I have to work with what I can see in the night sky. But once we understand how certain objects behave, we can start using them for experiments. So, we can use certain types of supernovae—Type Ia, the ones I study—to measure distances to other galaxies. Once we do that, we can study how the universe expands. That’s what led to the discovery of dark energy. We saw that the universe was expanding faster and faster—it was accelerating—so you had to invoke something that would counteract gravity. We call it dark energy. We don’t know what it is, but we’re using supernovae to study it, and to try to understand what exactly we’re dealing with. The same can be said of dark matter or even testing whether certain physical constants really are constant. If they’re not, that will be a brand-new, exotic physics.

Those are the main reasons, I would say.

Lastly, can you tell me a bit about the history? I guess I associated their discovery with the Danish astronomer Tycho Brahe, but your book shows it was much, much earlier than that.

We can’t say that anyone discovered them. It’s possible that thousands of years ago, different cultures already observed a supernova changing in the night sky, and simply didn’t record it or recorded it in a way that we don’t know how to interpret today. There are claims that Australian Aborigines were already observing supernovae or that Native Americans in North America had observed them. These claims are interesting but hard to substantiate.

What we can say for sure is that the first written records come from China about 2000 years ago, maybe even earlier. Chinese court astronomers observed the night sky every night and were interested in things that changed: comets, eclipses, asteroids, supernovae. They used them to prognosticate about the state of the empire and the emperor. Depending on the brightness and color of the supernova, it could be a good omen or a bad one. So, we have these very detailed records.

China culturally influenced all of East Asia. So, at some point, we also see similar court records start to appear in Korea and Japan. They had their own astronomers, but they did the same types of observations and recorded them in similar ways.

At some point, we start to get records from the medieval Islamicate world—the Arabian Peninsula, northern Africa, and the Iberian Peninsula, where you had the Caliphates. So you have detailed records in Arabic. And it’s only after that, once we get into the Renaissance, that we start to see detailed records in Europe. That’s where Tycho Brahe and then Johannes Kepler come in. They were the most famous European astronomers to observe and study supernovae, and they used them to come to some very interesting conclusions.

At the time—this was the end of the 16th century—cosmology was still dominated by the Greek models, what was called the ‘Ptolemaic’ model. The Earth was at the center of the universe and then you had interlocking spheres above that with the Moon, the Sun, and the planets. At the very top, there was a sphere of fixed stars which, according to the Greeks (stemming from Aristotle), was immutable. Any changes that you saw in the night sky could only happen in the spheres below.

Tycho Brahe was an amazing observer. He had his own observatory with state-of-the-art tools of the time. When he observed the supernova named after him, he tried to measure a parallax to it. Parallaxes are pretty cool. If you place your thumb in front of your nose, and you close each eye, you will see that your thumb seems to jump in front of whatever you have in the background. That effect is called a parallax. You can use it to measure the distance from your eyes to your thumb. It’s due to the distance between your eyes: it seems to jump because you’re seeing your thumb at a different angle on the background. You can do the same thing with the stars. You look at the star when Earth is on one side of the sun, say in the spring, and then you wait half a year until Earth is on the other side and you look at the star again. You’ll see it shift in front of the background stars.

Tycho Brahe couldn’t measure the parallax of stars—that was beyond him, that would only come in the early 19th century—but he could still say, ‘If it’s nearby, I should be able to do this.’ But he couldn’t. He measured no parallax, from which he came to the conclusion that the supernova had to be very, very distant, in the sphere of the fixed stars. In which case, that sphere was not immutable. So this was one of the cracks in the Aristotelean/Ptolemaic model. When you start to add these cracks together, at some point it falls apart. Then we move to the next thing, which was the Copernican model.

Was it the first crack?

No. The Ptolemaic model was flawed from the beginning: there were mathematical and geometric issues with it. The Islamicate astronomers worked on that for hundreds of years before the Europeans stepped in again. One of the things I’ve tried to do in the book is correct certain Europe-centric biases that have crept in over the last 400 years and are very ingrained in how we talk about the history of astronomy. Even when people mention East Asia, they tend to completely put aside the Islamicate astronomers, who did amazing things. I’m trying to put them back in focus.