The best books on Ideas that Matter

recommended by A C Grayling

The Professor of Philosophy at the University of London and Fellow of St Anne's College, Oxford, picks five books on Ideas That Matter. He discusses Aristotle, Darwin, Kant, Hazlett and Austen

Why The Nicomachean Ethics?

The Nicomachean Ethics sets out in a systematic way to answer the question, “What is the good life? ” Aristotle wrote it not for scholars, not for other professional philosophers, but for everybody. He took the view that if a person applied practical wisdom to the right course of action in a given circumstance, he would achieve the good. And I like the fact that, as Socrates had done before him, he was thinking about a theory of the good life in terms of what is practical and reasonable. In writing some of my own books for a general readership, I’ve tried to do something along these lines.

What does Aristotle say about being good then?

Aristotle’s answer to the question is based on the idea that we call “good” what relates to the distinguishing function of a thing. So a knife is a good knife if it cuts well. Analogously, when we say that a person is good, what we mean is that he lives according to the most distinctive thing about human beings, which is the faculty of reason. If you live a considered life you will have what Aristotle called “eudaimonia”. The usual translation of eudaimonia is happiness, but that concept is rather too thin. It really means “flourishing” and “achievement”.

What happened to the idea of the “public philosopher”?

The idea that philosophy belongs to every educated person has been diminished as a result of the professionalization of the academy over the last century or so. The result has in many ways been negative; philosophy has developed into an esoteric pursuit marked by technical jargon and over-fine distinctions, rather like scholastic philosophy. If you go back to Hume, Locke or Descartes, you find that they weren’t writing for professionals in university, they were writing for their educated peers. Every educated mind should be reflective and engaged with the great questions. 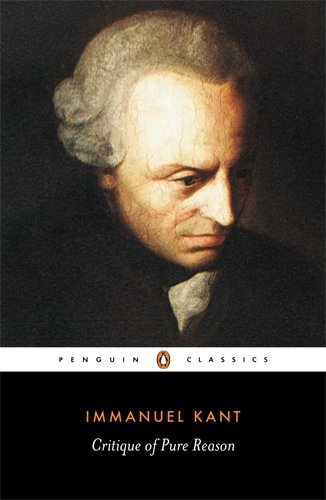 Kant, the author of your next choice, is surely no “public philosopher”?

True, the Critique of Pure Reason is not a book for the general public (unless they work very hard at it). But the contribution it makes to philosophy is fascinating, although I don’t think that it’s right in many of its details. It was a powerful effort to make sense of the relationship between thought and the world. In my own more technical work in philosophy I’m fascinated by the same question Kant is asking. It is one of the most fundamental questions in philosophy: how do thought, experience, language and theory-formation relate to the world out there?

What does he argue?

Critique of Pure Reason is an effort to show that when we try to apply the concepts of our ordinary perceptual experience to what lies beyond sense perception, they run wild, like cogs not engaged with each other. All the concepts we use in thinking about the world, for example unity and causality, are only the properties of our ordinary experience. When we start thinking about things that lie beyond the bounds of our senses, and try to apply these concepts to them, we get into trouble.

Now on to something a little lighter – you are a Jane Austen fan?

You could say that – I used to go to bed with Austen every Easter holiday when I was a student! Austen sets the example of how to do what all great literature should do – reveal something about the human condition. Pride and Prejudice is a great example of this. Everyone knows roughly what it is about. Elizabeth Bennett and Darcy misunderstand each other at the outset – he thinks she is rather vulgar, and she thinks that he is horribly stuck up. As the novel goes on they both re-learn how to judge one another, they re-evaluate the other’s moral worth. Among many other things, Pride and Prejudice is an exploration of moral epistemology. 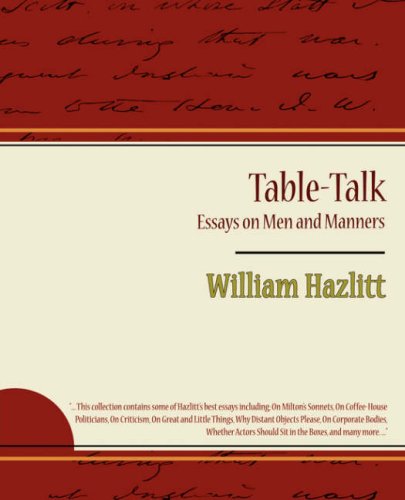 Table-Talk, Essays on Men and Manners

And you can learn a lot from your next book, Table-Talk?

Table-Talk is a collection of essays. Hazlitt is one of the greatest essayists of the English language. He applies himself in his essays to everything from philosophy to the arts and theatre. He works to the model set by Montaigne, the French essayist. Another of his books particularly testifies to his perceptive mind, The Spirit of the Age, in which he names all the people he thought would still be known 100 years ahead. Reading it now, one sees that he was amazingly prescient.

Why did you choose it as a classic?

What’s interesting about the collection is that the essays are some of his most wonderful work, and yet he wrote them at a time of heartbreak. He had fallen in love with a girl of 19, who he never went to bed with because he wanted to marry her (he was one of these men who thought that women were either Madonnas or Magdalenes, and he wanted her to be a Madonna). And so he divorced his wife to be with her. But by the time he had done this, it was too late; she was already sitting on someone else’s knee. Mary Shelley, Mary Godwin’s daughter, said after seeing Hazlitt at this time that she didn’t recognize him until he smiled at her; he was looking so harrowed by the experience of unrequited love. And yet he was able still to produce this fantastic work.

What was the role of the essayists, and where have they all gone today?

Hazlitt’s era was the great heyday of the essay. All educated people, who admittedly only made up a small portion of the population, would read essays. The participants of this intellectual society were participants in the “great conversation”, what you might call the great debate of mankind, the conversation that society has with itself about ideas, politics, and beliefs. All these areas were written about in journals and magazines, which were miscellaneous in content. Essay collections were the television, the radio, the debating society of the day. If you open a Sunday newspaper you tend to get a variety of subject matters, and in a way you might say that the Sunday papers have inherited the role of collections of essays. Essays were an education, a university in themselves. There is nothing exactly matching them today. 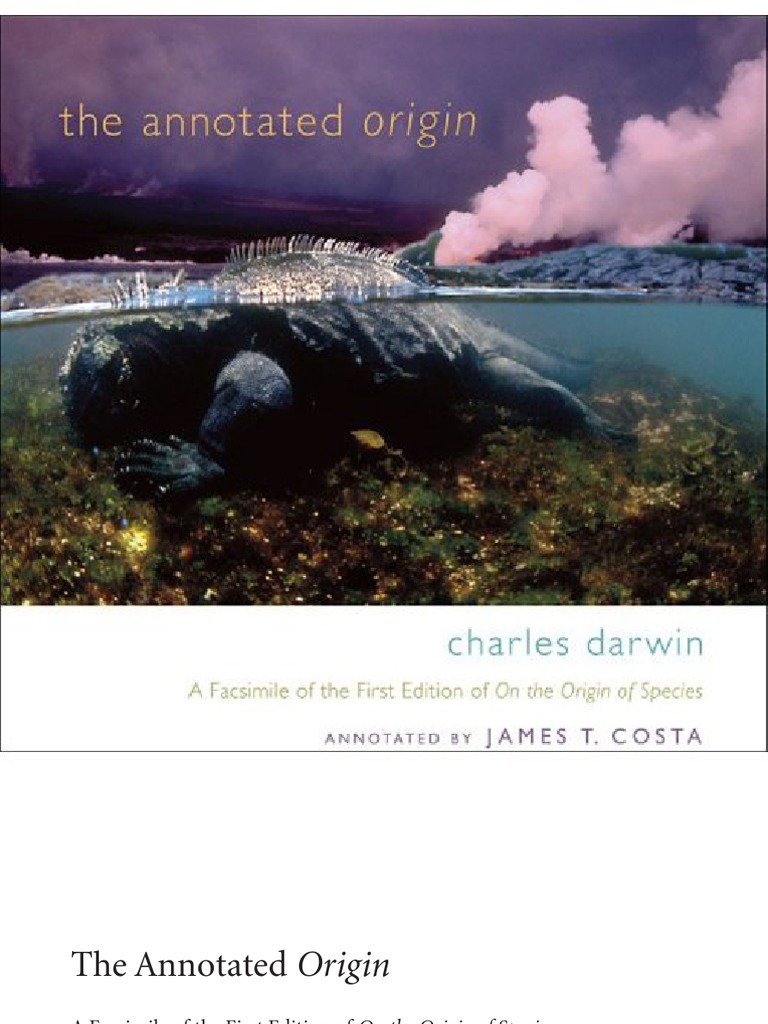 On the Origin of Species

From society to science…

I chose The Origin of Species because it’s the 150th anniversary of the book’s publication and the 200th anniversary of Darwin’s birth. All this year we’ve been having celebrations and conferences. I wonder how many people have actually read The Origin of Species, which I think they should. The book is a classic for two reasons. The first is that it’s the foundation of modern biology. Since it was written 150 years ago none of the work done in biology has undermined its original thesis, but supplemented and developed it. It remains the bedrock of modern biology. The second reason it’s a classic is that it utterly changed the point of view of humankind. Beforehand it was impossible to think otherwise than that humanity and the earth were at the centre of the universe. The puzzle was how could all the variety of life, and indeed life itself, be the work of anything other than a omnipotent agency? Darwin’s evolutionary theory answered that. It was a revolutionary moment. Although all my chosen books so far have been important books, this was one of the most important books ever written.

A C Grayling is an English philosopher. Until June 2011, he was Professor of Philosophy at Birkbeck, University of London. He is also a supernumerary fellow of St Anne's College at Oxford University. Grayling is the author of around 30 books, including What is Good? and most recently The Good Book: A Secular Bible. In 2011 he founded the New College of the Humanities, an independent undergraduate college in London.

Philosophy BooksIdeas
Save for later

Noga Arikha on Philosophy, Science and the Body Books

A C Grayling is an English philosopher. Until June 2011, he was Professor of Philosophy at Birkbeck, University of London. He is also a supernumerary fellow of St Anne's College at Oxford University. Grayling is the author of around 30 books, including What is Good? and most recently The Good Book: A Secular Bible. In 2011 he founded the New College of the Humanities, an independent undergraduate college in London.

Books by A C Grayling 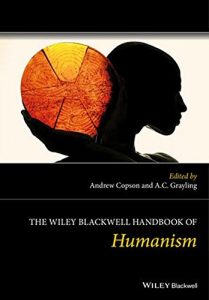 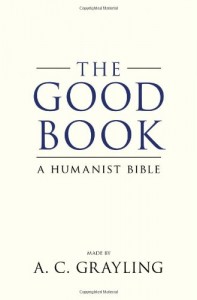 The Good Book
by A C Grayling 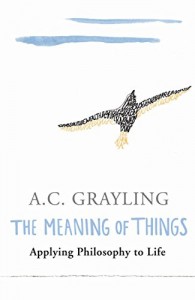 The Meaning of Things
by A C Grayling 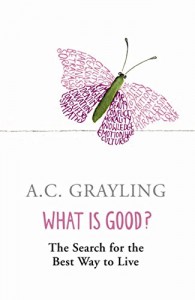 What is Good?
by A C Grayling 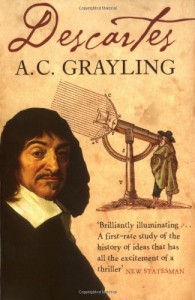 Descartes
by A C Grayling