The best books on Desert Nations

The author explains the allure of desert nations, through a discussion of books including Arabian Sands by Wilfred Thesiger and Sultan In Oman by Jan Morris 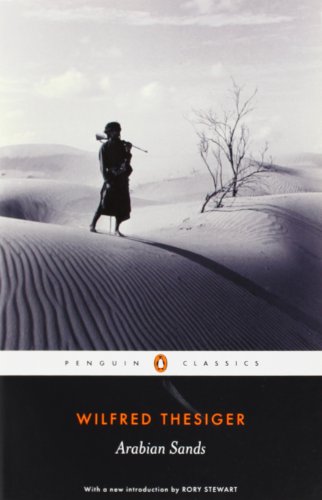 Tell me about the Wilfred Thesiger book.

This was written in the 1950s after Thesiger returned from five years of Arabian travel. He was one of the few non-indigenous people to cross “the Empty Quarter”, the desert that occupies a huge part of what is now Saudi Arabia and the United Arab Emirates. It’s almost a million square kilometres of billowing amber dunes – and more terrifying than an ocean. Usually, people travelled around the peninsula by sea, hugging the coast to get from town to town. A group travelling from Qatar to Mecca would make their way around the southern part of the peninsula. But there were ways of crossing it and, after World War II, Thesiger was offered a role mapping out the patters of locusts travelling across the desert. He jumped at the chance and joined the Rashid, a Bedu tribe, who lived in the old way, unsullied by the modernity that would soon accompany the arrival of oil prospectors. Thesiger relished the intimacy of the desert brotherhood. His passion for their simple way of life grew ever greater as he spent time with them. They cared for each other, knowing their lives depended upon it. And it had to be so; if one is cast out in the wilderness like that, it isn’t possible to survive alone. The camaraderie he describes is exclusively male; but he appreciated the regimen of the desert’s “barbaric splendour”. He valued the austerity of the lifestyle and the keen hardness of the people he declared most noble, pure in thought and deed.

In a later addition, after a return visit in the mid-70s, Thesiger writes of his horror at the changes. He found the people lazy and indulgent, their finest qualities replaced by cars and oil. A final visit in the 1990s brought acceptance – and a retraction of this bitter earlier response to progress. He could not expect other people to freeze themselves in time – why should they prefer a flea-ridden goat-hair tent to a house with modern amenities? 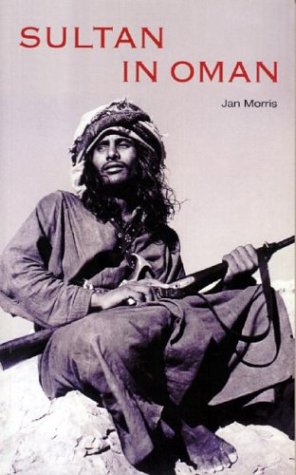 This is a lovely book, a hidden classic. It’s gently and honestly written. She was invited by the Sultan to accompany him in a “royal progress” from Salalah to Muscat in the early 50s. The charm of this book is in the wonderfully observed detail, and there are surreal twists because of being part of somebody else’s entourage and relinquishing control over proceedings. They made the crossing in cars and there are descriptions of the ragged and majestical terrain, of the makeshift encampments they rested in along the way. It was the first car journey ever made across the interior of Oman. The Sultan was making the journey to settle issues related to oil and there is a good deal of detail on the whispering and politicking that accompanied the ruler’s entourage and the run-ins with the locals in the sultanate’s neglected outposts. Morris describes this now forgotten world and the small, discombobulating glimpses of modernity that met them along the way. There is a description of Sheikh Shakhbut of Abu Dhabi, who rides to meet them in his yellow Cadillac. It’s a lovely glimpse of a very strange journey. 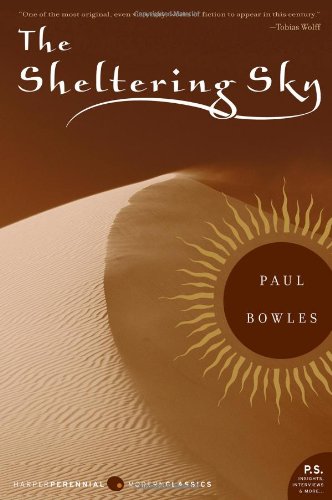 Tell me about The Sheltering Sky by Paul Bowles.

This is a novel about the parallel universe that opens up when you step out of urban civility into wild terrain. It centres on an American couple travelling to Morocco and opens with the crazy markets and tearooms, the hubble-bubble smoking in the towns, which are a vivid, almost frightening glimpse of another world. The travellers are enthusiastic but their ignorance makes them vulnerable; they have no way of being usefully watchful in this alien terrain. As they journey south the heat and disorientation intensifies and the towns grow further and further apart, with wilderness sucking them into a chain of events they cannot control. As everything disintegrates around them we see the truth behind the veneer of civility. In the emptiness they are faced with themselves and, as the marriage dissolves, the danger of travel becomes a nightmare – beyond the harsh terrain, disease and physical toll of desert travel, tragedy and madness wait.

In a way, all desert books are about travelling within yourself, and not being entirely in control. That surrender to the kindness of strangers is common to everything I’ve ever read about the desert, too. You surrender everything because the desert will take it from you anyway. And you have to learn a new kind of watchfulness. 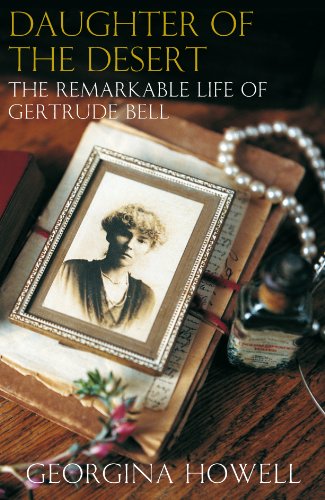 Daughter of the Desert

This next book is about the adventurer, Gertrude Bell.

She is an important figure in British travel, both as a woman doing what she did, traversing the Middle East and breaking stereotypes, and for creating a role of lasting historical significance. It’s exciting to open a book and know that just by setting foot out of Britain Bell was making a huge stride. She was born in the 19th century and lived into the early 20th century. She travelled, yes, but she acted as an archaeologist, studying history and mapping out Mesopotamian ruins. This was a great time for British explorers. She was part of a group who were conquering the territories of the empire to see what stories and history had been left in the ground. Bell seemed to absorb the cultures where she worked; she migrated wholeheartedly, speaking fluent Persian and Arabic and befriending those people she met along the way. She didn’t simply drift across the surface as a historian, but created a bond in the present with the region. Taking on the Arabian deserts, an arid, uninhabitable and male terrain, she demonstrated enthusiasm and positivity and she went on to influence the country that later became Iraq through her understanding of the different groups – Kurds, Shi’ites and Sunnis. She worked closely with Churchill and was instructive in the creation of Iraq, offering clarity on what would and would not be practical in governance. Never losing sight of the importance of history and culture, she began what became the Baghdad Archaeological Museum. The uncrowned queen of Iraq, Bell made all the difference culturally and politically. 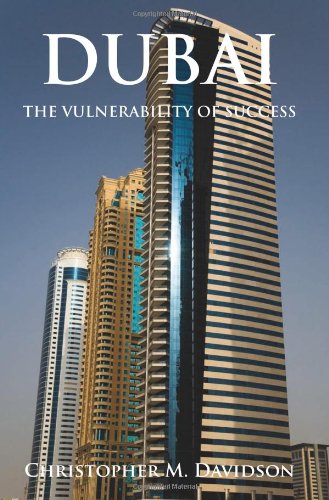 The Christopher Davidson is a modern book about Dubai.

When it was first published it was banned in the UAE. It’s billed as an academic tome but it’s an easy, illuminating read; wound around the facts are anecdotes and stories that lay bare the vulnerable position Dubai has placed itself in by making itself into a “brand”. Without the oil of its big brother Abu Dhabi, it has focused its efforts on financial services, property and tourism, all arenas that require foreign investment. Seeing this vulnerability Davidson sees the bubble bursting. With the crash old news, the ban has been lifted.

But the book isn’t simply an analysis of an economic model; it delves into the past and tracks the unlikely story of this little settlement on the edge of a desert. We see how a tiny town inhabited by fishermen and pearlers – a trading stop on the silk route – muscled its way on to the world stage. These glimpses of history show the huge culture shock of modernisation; the simple life of fishing and pearling, tending dates or tending livestock in the desert has been replaced with a western-based way of life. Just a few decades ago the tiny population knew each other as family. Now huge cities are a challenge to identity. There used to be sand everywhere, roads used to run straight into sand, and everything was covered in dust. Now you could be in Dubai or Abu Dhabi and not really know you were near the desert at all. And Dubai has Abu Dhabi to contend with; the oil-rich capital has recognised that this is its moment and is stepping in with huge global plans.

Jo Tatchell is the author of A Diamond in the Desert, an illuminating portrait that gets behind the scenes in Abu Dhabi, the world’s richest city. Her first book, Nabeel’s Song: A Family Story of Survival in Iraq, was published by Sceptre in 2006 and was shortlisted for the Costa Biography Award. She writes on Middle Eastern culture and music for UK and US media.

Philip Mansel on The Levant

Jo Tatchell is the author of A Diamond in the Desert, an illuminating portrait that gets behind the scenes in Abu Dhabi, the world’s richest city. Her first book, Nabeel’s Song: A Family Story of Survival in Iraq, was published by Sceptre in 2006 and was shortlisted for the Costa Biography Award. She writes on Middle Eastern culture and music for UK and US media. 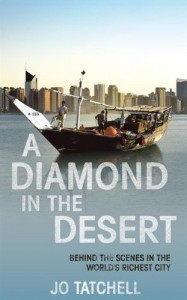 A Diamond in the Desert
by Jo Tatchell 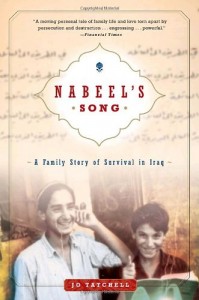 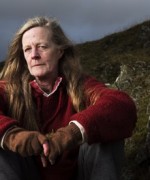