The best books on India, Ancient and Modern

The award-winning writer selects five books on India and says that the Mahabharata, eight times the length of the Bible, is one of the great works of literature of mankind - and every bit as good as it’s made out to be

I thought we might start by discussing the non-fiction books you’ve chosen. Perhaps we could start with the Alex von Tunzleman book, Indian Summer.

Alex made an extraordinary debut. She was a girl more or less straight out of Oxford, writing in an extremely well-worked field – there are hundreds of books about Partition in India and Pakistan – and to have written a book fresh out of university, which says a lot of new stuff, incredibly well, in the most palatable form I’ve ever read about Partition, is an incredible achievement. I really love the book. 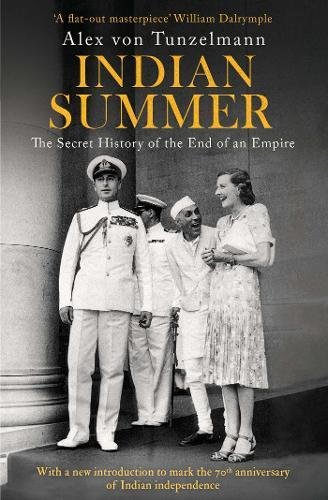 Indian Summer: The Secret History of the End of an Empire

Partition is a very complicated story. Many people have tried to tell it before, but this is far and away the best book I’ve read on Partition. I don’t think she had particular access to any brand-new material. She certainly didn’t get her hands on the material she would most have liked, the love letters between Nehru and Lady Mountbatten [wife of Lord Mountbatten, last Viceroy of India]. Because she does two things at once: she’s telling the love story of Mountbatten and Nehru – this extraordinary love triangle at the close of British India – and the extraordinary end to 300 years of what was often extremely violent imperial conquest. To have it ending with India’s first independent prime minister falling in love with the wife of the last viceroy – it’s an utterly amazing and extraordinary story. It’s not terribly clear whether their love was consummated at the time, although most people tend to believe that it probably was consummated at some point later.

So Tunzleman tells her narrative history by foregrounding the personalities of the people involved.

Exactly. Most of the books on Partition are pretty heavy going. There were long periods of meetings, missions … it makes for quite clumpy reading. Although you are obviously dealing with an epic turning-point in history, the path to it is so tortuous it doesn’t naturally lend itself to narrative history, yet she’s managed to do it. For a woman who was, what, two years out of college, it’s an enormous achievement. 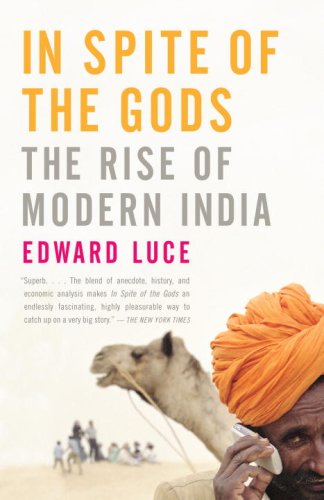 In Spite of the Gods

The next book you’ve recommended is based more recently, Edward Luce’s In Spite of the Gods.

Like Partition, this story has been much told, but Edward Luce’s account is authoritative, balanced, sensible and enjoyable. If there is a businessman going to India who wants to get a hang of the economics of the country in an accessible form, this is the book, no question. Luce was the Financial Times correspondent, married to an Indian, and really got under the skin of the place, really travelled. And most of all, he can write. A rare combination. I’m a non-economist. I don’t really understand money but he explained it to me most lucidly, more so than any other book.

He touches on the IT explosion in India, but he’s not convinced it’s the answer to all their problems, is that right?

Well, he makes comparison with China, where there is a completely different model of development. The Chinese model is, in a sense, a sort of mass manufacturing – everyone’s making car parks and industrial things. India is a culture in which huge swathes of the workforce are illiterate and so on, yet you’ve got this small, super-clever, over-well-educated, incredibly ambitious middle class who are doing the pernickety bits – the software, the fancy finance, the high-value stuff. But there’s a much smaller proportion of the population who are doing this.

So there are these two models of development, and at the moment the Chinese are pulling ahead. They’re educating their people much better. India is always the elephant, you know, moving slowly. But immovable once it gets going.

I visited South India a couple of years ago. You’d come across these IT cities rising out of the paddy fields, in the most unexpected places.

Yes. Even the flagship, Electronics City, outside Bangalore, is more or less impossible to get to. There’s a Sanjeev Bhaskar joke about Bangalore: “Honey, I’m only a mile from home – I’ll be there in six hours!”

Amartya Sen, author of your third recommendation The Argumentative Indian, is an economist. Is this another discussion of Indian financial future?

He is an economist, but this is not a book on economics. It’s a book of essays on history and culture. It’s definitely not the first book you should read on India, it’s for someone who knows the country well, but it’s a wonderfully erudite, discursive, witty, clever book.

He writes on a range of topics, including the extraordinary atheist tradition in India, which is often forgotten about, taking on the V S Naipal Hindu fundamentalist line, of India being this pure Hindu land. He’s very good on the degree to which India is shared between Muslims and Hindus. India is multi-faith, multi-cultural, multi-lingual. And it’s this pluralism and then endless debate going on between these different ways of looking at the world, different value systems: Islam, Hindu, Christian, Buddhist, Sikh, Jain, atheist. It’s a wonderful vision of India, and of how India has this long, argumentative tradition of fighting about everything. So it’s a great title, it’s very true.

Definitely a book for someone who knows India well. It’s a very necessary antidote to all sorts of myth-making by a variety of different people. 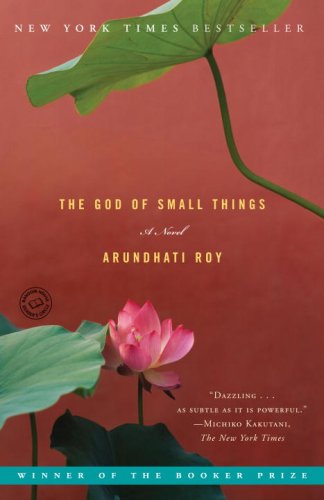 The God of Small Things

Why do you recommend the Arundhati Roy book, The God of Small Things?

Of all the great modern Indian novels, of which there has been a flood, Arundhati Roy is the one I enjoyed most. It’s got that fabulous quality, in the literal sense. It has a craftsmanship to it, and one of the greatest endings to any novel. There are so few modern novels which end perfectly, with that perfect click into place, the lock clicking shut. But it has that, and it’s a very well-worked, well-written novel. I hope she repeats it at some point in the future.

It has a great debt, although not in subject matter at all, to Toni Morrison’s Beloved: oppression, in this case not between black and white, but of the lower caste by the upper caste, the love affair between an upper-caste woman and an untouchable man. It ends in tragedy. But although you know what will happen for almost the entire book, she still manages to save up this extraordinary ending.

Roy has a very tricksy writing style, which seemed very fresh at the time. Those who have read some of her writing after this may find it less so, and, on re-reading it, it didn’t have quite such an effect on me as it did the first time when I read it in 1997, but it is a great novel by any standard, and as a debut novel outstanding. 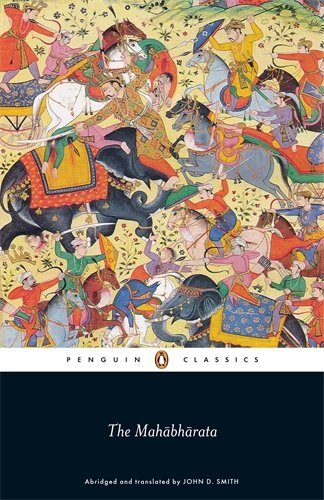 It’s one of the world’s great myths, an epic poem. It’s eight times the length of the Bible, one of the great works of literature of mankind. I came to it via the Peter Brook film, and read the script subsequently, and it is every bit as good as it’s made out to be. A very rare thing. It has a sort of Shakespearian ambiguity; you feel as much for the baddies as for the goodies. No one is pure. The bad guys aren’t entirely bad, the good guys aren’t entirely good. It’s brilliantly done, and the most gripping story ever told.

I worked my way through – slowly – the 15-volume translation from the Sanskrit. It’s a great introduction to ancient India. This was Jean-Claude Carriere’s last great script – nothing he’s done subsequently comes anywhere near this. It’s an extraordinary, slim introduction to Indian mythology.

It really is worth going on Amazon and getting the DVD of the Peter Brook version. I watched it for the third time recently, all nine hours of it, and it’s not in the least had its brilliance diminished. It’s one of the greatest works of mythology translated into one of the greatest films, by one of the great masters of both screen-writing and direction.

And it’s also a good entry into Hindu thought and ancient India. It opens up a whole range of India which is usually closed to a Western audience, particularly to a casual reader.

I suppose that’s the same for the final book you’ve mentioned, The Interior Landscape: Love Poems from a Classical Tamil Anthology, translated from the ancient Dravidian.

This is a series of translations from largely Tamil, but also Sanskrit, texts, by one of the great modern poets of India, who was the greatest translator of ancient Indian poetry into modern English. It’s equivalent to Ted Hughes doing his translations from Ovid, the same sort of thing. A great modern poet taking on ancient poetry and making modern literature. It’s a very slim text – you can savour it and get the essence of it in half an hour; it’s a very quick way of getting into something extraordinary.

Travel writer and historian William Dalrymple wrote his first book, In Xanadu, at the age of 22. Since then he has published seven further books and been awarded a host of awards for his writing and broadcasting. He is a fellow of the Royal Asiatic Society and of the Royal Society of Literature.

Travel writer and historian William Dalrymple wrote his first book, In Xanadu, at the age of 22. Since then he has published seven further books and been awarded a host of awards for his writing and broadcasting. He is a fellow of the Royal Asiatic Society and of the Royal Society of Literature. 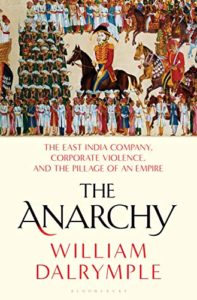 The Anarchy: The East India Company, Corporate Violence, and the Pillage of an Empire
by William Dalrymple 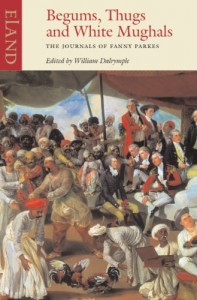 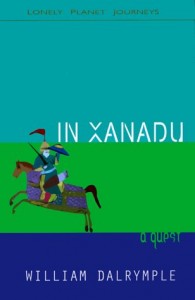 In Xanadu
by William Dalrymple 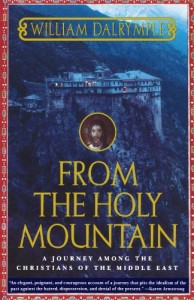 From the Holy Mountain
by William Dalrymple 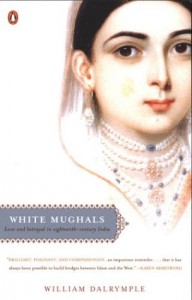 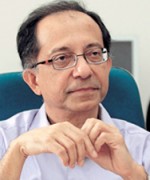 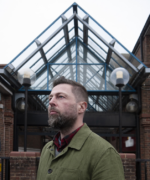