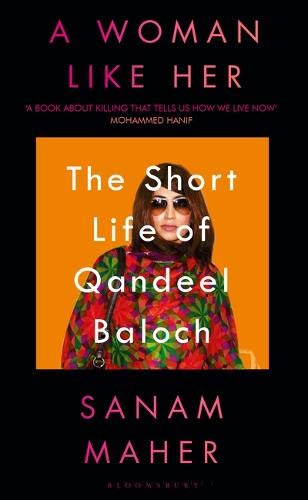 A Woman Like Her: The Short Life of Qandeel Baloch

A new book from the Karachi-based journalist Sanam Maher investigates the life and violent death of Qandeel Baloch, Pakistan’s first social media star—and unlikely feminist icon. Maher draws from interviews and on-the-ground reporting in rural Pakistan, as she examines the carefully curated image Baloch chose to present to the world, and what the polarised response tells us about Pakistani society. The book has attracted praise from Fatima Bhutto, Olivia Sudjic and Molly Crabapple, among others.

We spoke to Sanam Maher, the author A Woman Like Her: The Short Life of Qandeel Baloch, to find out more.

Who was Qandeel Baloch, and how did she die?

In February 2016, a journalist from the international news agency Agence France-Presse interviewed a 25-year-old Pakistani woman for a story on how the country’s youth – an estimated 180 million people under the age of 30 – interacted with social media. “The country even has a Kim Kardashian type figure – Qandeel Baloch,” the journalist said. The young woman had caught the reporter’s attention after she posted a video on Facebook mocking a presidential ‘warning’ not to celebrate Valentine’s Day – a ‘Western’ holiday. In that video, dressed in a low-cut red dress that rode up her thighs as she lay back in her bed, her lips painted scarlet, Qandeel called the country’s conservative politicians “shameless” and “idiots” and asked the current prime minister, Imran Khan, to be her Valentine. The video went viral and it shows us everything that Pakistanis loved – and loved to hate – about Qandeel: she played the coquette, dished out biting critique of some of Pakistan’s most holy cows, and gave her heart away to politicians, actors, singers and cricketers. We snickered at the way she spoke and her accent, and marveled at her gumption. She was the stuff of a hundred memes and the butt of our jokes. She was Pakistan’s first celebrity-by-social media. Five months after that Valentine’s Day video, she was dead. Her brother strangled her in their family home, in what was called an ‘honour killing’ – a murder to restore the respect and honour he believed Qandeel’s behavior online robbed him of.

Is Kim Kardashian a good analogy?

The Kardashian connection is tenuous at best – Qandeel certainly did not enjoy the privilege or access that Kim Kardashian has. I think it’s a label we revert to when speaking about Qandeel Baloch to an international audience because it’s the easiest way to explain that she posted risqué photos and videos on social media but that label ignores the reality of the danger of posting such content online in a place like Pakistan where, I think, we are more likely to find a dead woman infinitely preferable to an overtly sexual one.

What drew you to this case? Why did you want to write about it?

In July 2016, I remember staring at the television the day news of Qandeel’s murder broke, and feeling stunned. Just days before her death, we had learned certain things about her life: that her real name was not ‘Qandeel’, that she came from a village in southern Punjab, had been married and had a child. I was immediately struck by the idea of this woman who had managed to fool millions of us – her audience and the media – and who had created this persona that we had bought into. How does all of that unravel and when it does, when people find out who you are, what’s the worst that could happen?

How did she become one of the country’s most well known and divisive women – even joked about in parliament – and how did she make sure that she kept us riveted with her photographs and videos? So riveted that we couldn’t turn away long enough to question who she was and where she had come from.

The book doesn’t just focus on Qandeel. It tells her story, but also uses each part of her life in order to open up into a story about Pakistan at this particular moment. For instance, when looking at Qandeel’s fame as a viral star, I began to think about how my generation of Pakistanis is connected to the world like never before – what are we doing online? What does it mean to go viral in Pakistan? How are we building communities online in order to speak in ways that we may not be able to “offline”? What happens when we behave in a way online that seems to break the rules of how we are supposed to behave, particularly as women, “in the real world”? We’re connected to a global space of ideas and possibilities online, but we’re still very much grounded in the society and culture we live in here in Pakistan, and through Qandeel Baloch’s story and some of the other stories in the book, you see the terrible ramifications that a clash between the two can have. I knew that this book wasn’t going to be about Qandeel only, but about the kind of place that enabled her to become who she did, and the place that ultimately found that it could not tolerate her.

Could you tell me a little bit about how she chose to portray herself online, and whether this conflicted with the reality of her life as you uncovered it?

I had a moment of culture shock when I travelled to the village that Qandeel was born and raised in. I remember my first day very clearly. I said something about how I hadn’t seen the kind of burqas that the women there were wearing in other parts of the country. The burqas were a big swathe of fabric, fitted to a skullcap on the woman’s head, with what looked like a funnel emerging from the skullcaps. There were no slits for the eyes in the burqa. I was told the ‘funnel’ ensured that air got inside the burqa so the women wouldn’t suffocate in the summer in south Punjab. When I went quiet, a man I was interviewing told me a story about some of the men he knew: “They do not give their women shoes,” he said. I was confused about what he meant. He explained, “Imagine you do not have shoes on your feet and you step out of the house. Where will your eyes remain? On the ground. You will never look up – never look at any man – or look around you. You will only look down.”

At that time, it truly hit me that Qandeel had the courage to relentlessly pursue the kind of life she believed she deserved. In her videos, she would dress exactly as she pleased (whether that was in a bathrobe, promising to strip, or to show off a dress she’d just bought) and say whatever she felt like. She would tell little fibs about herself: that she came from a very rich family, she only made videos and posted online for a bit of fun, and not because she wished to be famous or rich. She would pretend to have an American accent or speak broken Urdu to show off that English was her first language. She created a story about herself, part truth and part lies, small fibs and exaggerations. The story allowed her to be whoever we wanted her to be. It allowed her to be whoever she wanted to be.

What do you think her celebrity and subsequent death tells us about contemporary Pakistani society?

The reactions to Qandeel’s murder revealed two very different answers to the question of what it means to be Pakistani, and more crucially, what it means to be a woman living in Pakistan today. In the days after Qandeel’s death, it was terrible to see the reactions online from many Pakistanis who were very happy that she had been “punished” for behaving the way that she did. I had acquaintances in my own social media feeds having vicious arguments about whether what had happened was right or wrong, and men and women condemning Qandeel’s death but then, in the next breath, saying “… but if you think about it…”

It would be a challenge for the average Pakistani to recognize the faces of any of the hundreds of men and women killed for honour every year. Their stories and our dismay at yet another killing fades with the grubby newsprint from our fingers as we read about them. But Qandeel was different. There was a sense of having known her as many of us engaged with her frequently online, whether that was to bait her, shame her, secretly watch her videos at night, or share her videos with friends, imitate her and make a meme of her. The news of Qandeel’s alleged “honour killing” hit home – she was not just another name in the paper. When she was killed, many Pakistani women engaged with the subject of honour killing very vocally as they felt they could not stay silent, and they talked about how a Pakistani woman can and should behave and what happens when she is believed to misbehave. Pakistan is notably obsessed with its ‘image’, and the question of who is good enough to represent the nation or what face we should show the world has dogged us for decades. We’re seeing that manifest itself right now as women add their voices to the #MeToo movement, only to have their detractors accuse them of trying to “shame” Pakistan or “bring a bad name” to the country. Pakistani women seem to bear the weight of expectations when it comes to determining how we would like the world to view us, and with Qandeel’s murder, many women were coming forward to say they were fed up with shouldering that burden.

I believe she meant different things to different people and she knew just how much to give us in order to keep us entertained and interested. I remember one young man saying to me that he watched her videos simply because he couldn’t understand how a woman could behave like Qandeel did and not try and hide it. She flaunted it. He’d never seen anything like that. Young women told me they loved how outspoken she was, how she said whatever she thought and seemed fearless. Some people were just amazed that she didn’t seem to give a damn what people said – in many of her interviews, you’ll see that the talkshow host or news anchor repeatedly asks her why she just doesn’t stop posting provocative photos or videos. They would ask, “Don’t you see what people say to you in the comments?” They seemed to constantly be asking, “What kind of woman are you? What kind of woman would behave this way?” She didn’t neatly align with our ideas of how women can and should behave, even in the face of criticism, and we just could not stop looking at what she did next.

Does she tell us something about global society too?

In the days before she was killed, Qandeel had accused a prominent cleric of behaving inappropriately with her. When I met this cleric and interviewed him, I was fascinated by how her accusation had played out and the ramifications of a woman’s word stripping away the power and status that a man enjoys. What happens when a woman or a marginalized group comes forward to say they will not tolerate abuse or harm or bad behaviour any more? When there is a struggle for the power to speak and be heard? These are questions that we’re all asking, whether that’s in Lahore or London.