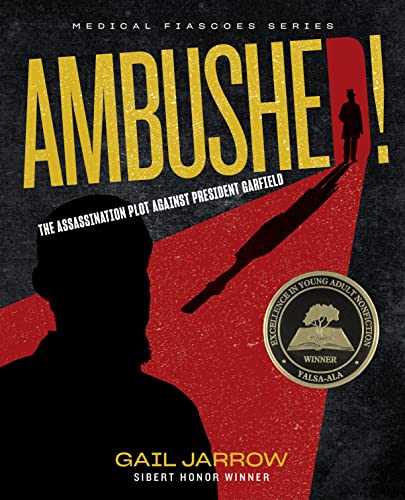 ***Winner 2022 YALSA Award for Excellence in Nonfiction for Young Adults***

This is a book about the assassination plot against President James Garfield. But more than that, it is a fascinating – if gory – read for anyone interested in the history of medicine, with a focus on 19th century USA. Garfield wrote to his wife during the Civil War that the fight with disease “is infinitely more horrible than battle”. When Garfield was shot it need not have been fatal; indeed it took over two months for him to die. This book is a powerful reminder that we need to take antibiotic resistance seriously. Similarly, today we are seeing a rise in cases of illnesses such as diphtheria, polio and whooping cough, and this book helps us reflect on what it was like to live without vaccines against them (the Garfields lost a daughter to diphtheria and a son to whooping cough). Ambushed! is part of a series about medical fiascoes.