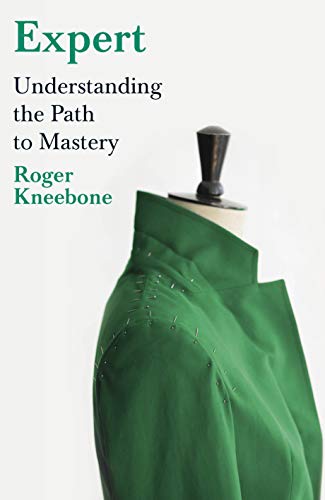 Expert: Understanding the Path to Mastery

Many of us aspire to mastery in our area of specialism. But how does one get there? It’s not always clear. Roger Kneebone, a former trauma surgeon turned Imperial College London professor and ‘expert on experts’ has spent years joining the dots between various professions to build a model of how one might advance to the levels of skill to become a true master.

Many of us aspire to mastery in our area of specialism. But how does one get there? It’s not always clear. Roger Kneebone, a former trauma surgeon turned Imperial College London professor and ‘expert on experts’ has spent years joining the dots between various professions to build a model of how one might advance to the levels of skill to become a true master.

You are a former surgeon, but are now billed as an ‘expert on experts’. Please: how did you make this transition, and what does it mean to study mastery?

My first career was as a trauma surgeon, treating patients who had been stabbed, shot or blown up. After studying as a medical student and then spending a few years as a junior hospital doctor in the UK, I went to Southern Africa for what was going to be a year – but I found the work so fascinating that one year turned into five. At first I worked in a huge hospital in Soweto, on the outskirts of Johannesburg, at that time one of the most violent places in the world. I became fascinated by the challenges of working under pressure within a team of experts – doctors, nurses and others – who were able to respond to whatever injuries our patients came with. After further experience in Cape Town I completed my surgical training, then spent some time in a war zone on the border with Angola before coming back to the UK.

Then I changed direction completely and became a general practitioner (GP). I spent the next 17 years in a medical practice in the southwest of England, about 100 miles from London. That was equally fascinating, but in a completely different way. But there too I was working with experts of many kinds. In a third change I moved to a large university (Imperial College London), which is where I’m working now, as Professor of Surgical Education and Engagement Science. There I have the opportunity to work with experts from many different fields in science and medicine, but also to connect with people from outside medicine altogether, including craftsmen, artists, performers and museum curators.

All this has made me aware of similarities and differences between people who have become exceptionally good at what they do. I’ve become fascinated at what they have in common, how working with such a wide range of experts can shine a light on what it means to become expert – and how that can help us as we try to become better at whatever we do.

In your book Expert: Understanding the Path to Mastery you discuss many different kinds of mastery: Savile Row tailors brush elbows with fighter pilots and molecular scientists.  Could you explain, briefly, what links these case studies – and why we can all benefit by understanding this common path towards the mastering of skills?

All these people have spent years becoming expert. By talking to them and thinking about my own experience, I’ve outlined stages that I believe we all need to go through if we’re to become really good at something. Broadly these correspond to the apprentice-journeyman-master model of the European mediaeval guild system which many people will be familiar with. In a nutshell, as an apprentice you start by knowing nothing, so you spend years in someone’s workshop, doing what they tell you in the way they prescribe. As a journeyman you go out into the world to ply your trade as an independent craftsman. In the final stage, as a master, you establish your workshop with apprentices of your own, and the wheel comes full circle.

This model describes how the system works but it doesn’t give the inside story – doesn’t explain what it’s like for anyone going through these stages. I’ve pulled together the experiences of the people you mention – a bespoke tailor, a hair stylist, a chef, a taxidermist, a wood engraver, a molecular biologist and many others. They are all people I’ve spent time with, watched as they work and had long conversations with. I’ve woven their stories into my own experience as a doctor, a teacher and an academic – and I’ve drawn on what other people have written. It turns out that all these experts have been through a similar process, however different their work may seem.

From all of that I’ve developed what I’ve called ‘a pathway to mastery’, mapping the stages anyone will need to go through if they want to become expert. These stages include the years of tedious repetitive work which everyone has to go through at the beginning; the difficult transition to becoming independent and taking responsibility for your errors and failures as well as your successes; then passing on your wisdom and skill to others less experienced  than you are.

Will understanding the commonalities help me in becoming a master of a skill myself? Why?

Yes. Understanding these stages will help anyone who is struggling to get better at what they do – whether it’s becoming a career performer, getting more satisfaction at work or simply following a personal passion. The path to becoming expert is long and bumpy, and there are always challenging stretches along the way where you don’t seem to be making progress and you’re tempted to give up. This book sets out a road map for that journey. By understanding the stages that lie ahead, and understanding how other people have gone through those stages, anyone reading the book will be inspired to persevere in whatever area they want to become as good as they can be.

I think passion and practice are both essential. There’s a lot of evidence that everyone who becomes really expert has spent many years striving to get there. That entails years of practice and a lot of hurdles along the way. It’s not easy, but the rewards and the satisfaction are huge. But to spend all that time and energy in going through those ups and downs you have be passionate about your work. Mastery requires both.

Will I know when I have become a master?

That’s a really interesting point. None of the experts I’ve worked with describe themselves as expert. None of them think they’ve ‘got there’. The more expert they are, the more modest and self-effacing they become. Joshua Byrne, the bespoke tailor who plays a prominent role in the book, told me ‘There’s no such thing as a perfect suit – but I’ll never stop trying to make one’. That sums up the approach these experts have, and it makes a lot of sense to me. After all, you never reach a point where you can play the piano – or perform an operation, or design a system at work, or whatever your interest lies – as well as it’s possible to do. You can always get better. That’s why I find this topic so fascinating. The path to mastery doesn’t have an ending.

You have a very interesting podcast, Countercurrent. Could you tell us a little bit about it, and what unites your guests?

I started this podcast about five years ago, while I was an Engagement Fellow with the Wellcome Trust. It started as a series of interviews with interesting people whose interests and expertise crossed traditional boundaries. That’s why I called it Countercurrent, to capture the idea of experts who swim against the tide.

Rather to my surprise, the podcasts began to attract a following. After a while I realised that what I was really interested in was conversation rather than interview – a generous-minded exchange of ideas without prescribing in advance where the conversation might go.

Now I’ve recorded 111 episodes, with almost 35,000 downloads to date. Some of the people who’ve taken part are well-known – for example Alan Alda (the American actor who was Captain Hawkeye Pierce in the television series M*A*S*H), Sir Nicholas Serota (who established Tate Modern art gallery in London) and Dame Emma Kirkby (the soprano who specialises in Baroque and Renaissance vocal music). Others are not well known at all – sometimes people I’ve met by chance, whose ideas I think would interest my listeners, and sometimes people I have collaborated with over many years. What unites these guests is that they each have a unique story to tell, and they each prompt me to think in new ways as we talk.

Countercurrent is a tremendous opportunity to invite people to spend an hour of their time in a conversation that I hope will interest other people – and certainly interests me. Most of the experts in my book have taken part in the podcast – you’ll find conversations with the tailor, taxidermist, hair stylist, combat pilot, wood engraver, harpsichordist, chef and many others – and Countercurrent is a tremendous way to explore these unique perspectives from medicine, science, the arts, philosophy – even mathematics.