The best books on Africa 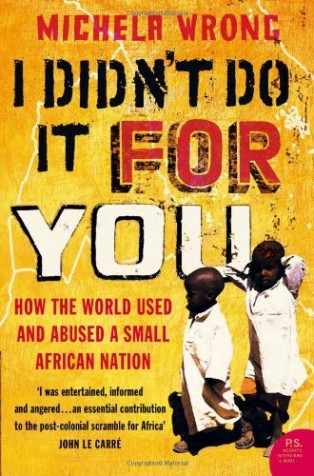 Long-time foreign correspondent Michaela Wrong, the author of books on Zaire, Eritrea, Kenya and Rwanda, tells us where to turn for engaging foreign perspectives on Africa. She recommends five of her favourite books on Africa, by anthropologists, journalists and one US president. 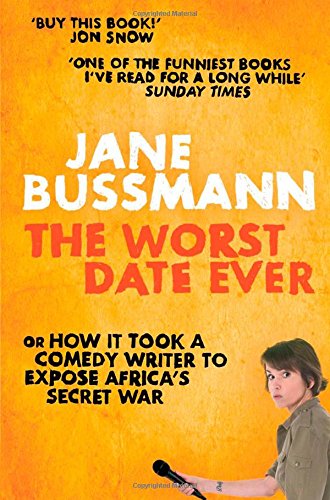 The Worst Date Ever

Tell me about Jane Bussmann’s book, The Worst Date Ever.

Jane Bussmann is a North London girl who moved to LA, planning to write the film script of all time, but ended up as a showbiz correspondent interviewing the likes of Britney Spears and Mischa Barton. She’s staggeringly honest about the reality of being a celebrity journalist and how the most testing question you ever get to ask is: ‘You’re in great shape. How do you do it?’ She’s pining for meaning when she sees John Prendergast on television – he used to be an adviser on Africa in the Clinton administration and is a kind of Africa-trotting troubleshooter – and she develops this massive crush. To impress him, she goes to Uganda to write about the Lord’s Resistance Army, the rebel group that is supposed to be devastating Northern Uganda. So she goes from interviewing Britney to interviewing child soldiers and refugees and she does it brilliantly well. She doesn’t change her tone of voice and there is no attempt to be earnest or worthy. She just transfers her sarcastic and foul-mouthed writing style direct to Uganda.

No! She never does get off with him. There are some great moments where she’s going round the local chemist’s looking for a lip-plumping gloss for her upcoming date – not an easy item to find. But the point is that along the way she gets sucked into the Ugandan story in its own right. It’s an excellent piece of journalism, because while the story presented to the world by the government in Kampala is that the Lord’s Resistance Army is a terrible force destroying Northern Uganda and enormous amounts of aid are needed to stave off a threat to international security, people in Uganda know that the army is making a massive amount of money out of the conflict and is very happy to keep it going. Effectively, the Ugandan army is holding the population of Northern Uganda hostage in supposedly protected villages. These places are little better than concentration camps, where the girls, who have already been raped by the rebels, then work as prostitutes for the soldiers. Bussmann captures all of this. It’s a story that doesn’t often get told and because it’s incredibly funny you have to keep reading. If you were presented with a serious work on the troubles in Northern Uganda you probably wouldn’t get through it.

You’ve gone for Barack Obama’s Dreams From My Father next.

It came out in 1995 when Obama was a young man and it was reissued in 2004, when he’d just been made senator. I’m glad I read it after writing my own book on Kenya because it goes to the heart of something that I try to capture in my book but probably don’t manage to do quite as well. My book is about corruption, his is about more than that, but the point he makes, and I agree with him, is that corruption is not about personal greed, it’s about compassion. Compassion for the extended family, whose members put incredible pressure on those who do well. Since they don’t trust the state to do anything, they’re dependent on family. Obama tells the story of Auma, his half-sister, who is educated, hard-working and has succeeded abroad, who owns property and a car, and recounts the way the entire family basically leeches off her. It’s not good for either side. She resents it because all her projects are undermined, but the family is also resentful of her because they don’t like being beholden. If aid is one of the problems in Africa, the extended family is also both a blessing and a blight. Obama didn’t even spend that long in Kenya, but he captures that conundrum immediately. 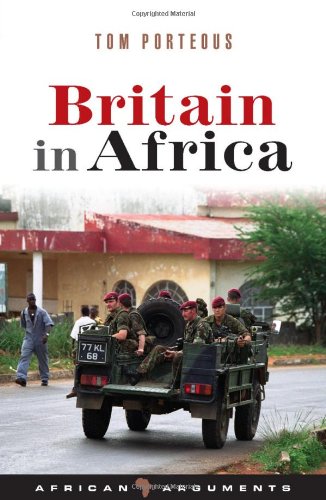 Why did you choose the Tom Porteous book, Britain in Africa?

This slim booklet has hardly been reviewed anywhere, but it deserves to be. Porteus is a former BBC journalist who worked for the Foreign Office but now he runs Human Rights Watch UK. He is a very good journalist who knows Africa extremely well. Over the last 12 years the humanitarian imperative has come to dominate British policy. It is an approach rooted in the American economist Jeffrey Sachs’s work, but then supported by Bob Geldof, Bono, Live Aid and Band Aid. The theory is that Africa needs to be jolted out of the poverty trap with a massive injection of aid. No realpolitik is necessary in Africa – we can just do good. That approach was part of the bubbling optimism of Blair and Bush, who thought they could sort out the world’s problems, a trend which reached its apogee with the invasion of Iraq. This is a simple, short, calm book which tracks the good intentions that lay behind this policy. Things are now going to change. That grandiloquent Blair vision of global intervention finally crashed on the rocks in Iraq and Afghanistan. We’ve got the credit crunch, which is drying up global generosity, and we also have a generation of African writers – people like Dambisa Moyo, Andrew Mwenda and Moeletsi Mbeki – who are saying that aid is part of the problem.

What do you think?

I think aid is often necessary, that it can make a small positive difference to growth rates, but it is not where Africa’s salvation is going to lie. To me, Dambisa Moyo and Jeffrey Sachs lie at extreme opposite ends of the spectrum, and the truth is somewhere in the middle. 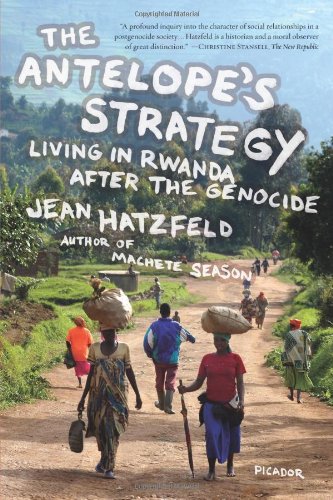 Tell me about the Jean Hatzfeld book on Rwanda.

The Rwandan genocide is not just one of Africa’s big stories, it is one of humanity’s big stories and it will have to be written about for decades and decades to come, just like the Holocaust. Hatzfeld is a journalist for the newspaper Liberation who has written three books on the subject, all translated from the French. The first is called Into The Quick of Life and is a series of interviews with survivors. In the second, Time for Machetes, he goes into a prison and talks to a group of young friends who took part in the genocide. This is the genocide seen through the eyes of killers. It is easy to write movingly about victims, but it is more interesting and more important, if we want to stop these things happening again, to talk to the perpetrators.

In this third book he goes back to Nyamata, the village where he started out, and this time he talks to both victims and perpetrators, now living cheek-by-jowl. President Paul Kagame, who realised that the prisons were overflowing, introduced the ‘Gacaca’ system of justice. If you were a suspected killer you were offered a deal – you could go back to the village and confess in public to your crimes. If you were telling the whole truth you were released and sent home. If someone said: ‘No! You actually killed 15 more people up the road,’ – then you went back to prison.

This is a searing, poignant and very poetic book, not cluttered with facts and figures. The individual voices all come across so strongly and what you realise, listening to them, is that while there can be cohabitation, there is no real reconciliation. But there is simply no better alternative.

And has Rwanda recovered?

Well, a World Bank report recently named Rwanda as the country that had done most in the world to make it easy to do business there. Kagame is trying really hard to attract investors and find a new role for the country. But it’s hard to see how you can ever recover from a genocide in which nearly a million people died. 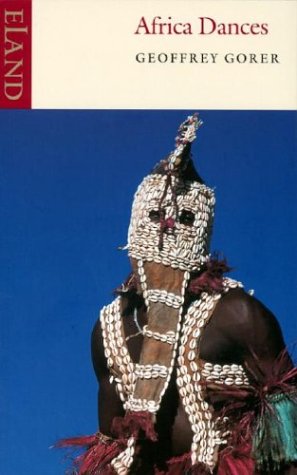 This one sounds jollier – African Dances by Geoffrey Gorer.

The longer you spend travelling and writing about Africa, the more you appreciate that many of today’s problems have colonial roots and that the scarring goes deeper than you once thought. You start to notice the difference in the colonial legacies left by withdrawing powers. This book was first published in 1935 and is about a young anthropologist, Geoffrey Gorer, and an African-American ballet dancer called Feral Benga on a trip across West Africa to study the native dances. They start in Senegal and head east. It’s a kind of road trip, and the dances only play a small part in the book. It’s very much about the conditions Gorer finds as he crosses the various borders, the divide between blacks and the whites, the difference between the English and the French speaking colonies. He finds the subjects in French colonies to be fearful and cowed – farmers in the field stand to salute as they drive past – and he meets French officials who never leave their little areas and are hugely contemptuous and arrogant. He finds, to my surprise and, I think, to his as well, that the British administrators are better informed, more humane, and have a better grasp of the region. It’s very much his own perspective, but it’s a fresh and interesting one, even if the language of the time jars a bit. It’s always difficult reading references to ‘negroes’ without wincing.

Michela Wrong joined Reuters news agency in the early 1980s and was posted as a foreign correspondent to Italy, France and Ivory Coast. She became a freelance journalist in 1994, when she moved to Zaire and found herself covering the genocide in neighbouring Rwanda. She spent the next five years reporting on events across Africa for Reuters, the BBC and the Financial Times.

Africa Journalism
Save for later

Michela Wrong joined Reuters news agency in the early 1980s and was posted as a foreign correspondent to Italy, France and Ivory Coast. She became a freelance journalist in 1994, when she moved to Zaire and found herself covering the genocide in neighbouring Rwanda. She spent the next five years reporting on events across Africa for Reuters, the BBC and the Financial Times. 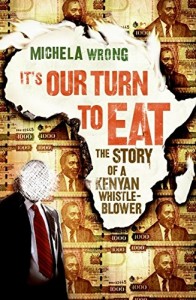 It’s Our Turn To Eat
by Michela Wrong 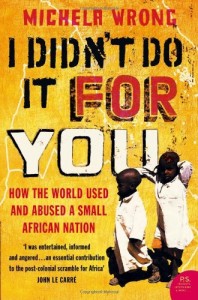 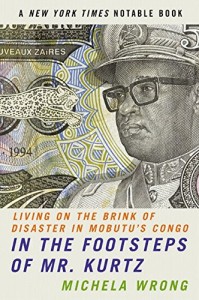 In the Footsteps of Mr Kurtz
by Michela Wrong 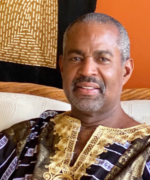 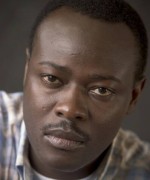 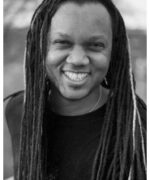 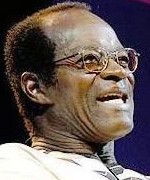 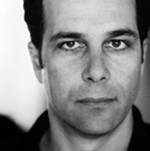 Anthropologist and Afghanistan expert Thomas Barfield gives a panoramic view of Afghanistan, from founding dynasties  to the failed central Asian states of today. He picks the best books on Afghanistan.

The medieval era in Europe lasted a millennium and saw massive social change and technological innovation, as well as calamities like the Black Death. That makes it a great period for historical fiction, offering a glimpse of a past that was very different from our own lives, and yet can resonate with the present. Here Marion Turner, Professor of English Literature at Oxford University, recommends some of her favourite historical novels set in the Middle Ages and explains why she finds them so compelling.