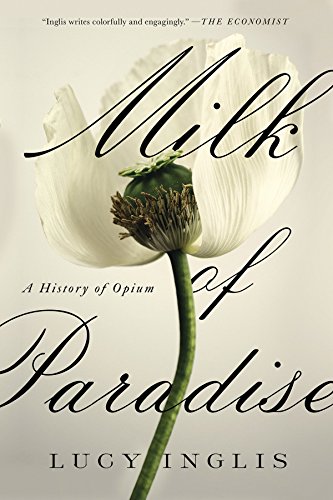 Milk of Paradise: A History of Opium

In Milk of Paradise British historian Lucy Inglis traces the history of opium from the poppy seeds found in excavations of Neolithic sites 8,000-10,000 years ago to the present day, with OxyContin wreaking havoc in the United States (on which more in Patrick Radden Keefe’s more recent Empire of Pain). It’s a fascinating history, not only because of the extraordinarily long timescale covered, but also because of the range of history that comes into play. There is opium’s role in the history of medicine as an analgesic and the story of the doctors—Hippocrates, Avicenna—who prescribed it. There is its role in cultural history, with some Romantic poets using it for inspiration, and the ‘heroin chic’ era in the fashion industry. Finally, of course, there is the role it played geopolitically, particularly in the Opium Wars. The Chinese did not traditionally smoke opium, but thanks to the Dutch East India Company—keen to sell opium from poppies grown in Batavia—a lot of Chinese people got hooked.

“She looks at opium in its various forms: poppy seeds, morphine and heroin and, in doing so, it becomes a genuinely global history. If only all historians could write like Lucy Inglis.” Read more...

The Best History Books of 2018