***We recommend the Landmark edition of Herodotus’s Histories***

Herotodus’s Histories, which dates from around 425BC, is the earliest continuous Greek text in prose to survive, according to Regius Professor of Greek Emeritus at Oxford University, Christopher Pelling. It’s a book that changed the meaning of ‘history’ forever, because in ancient Greek the word historie suggested  ‘enquiry.’ Herodotus was investigating the wonders of the world, rather than writing a history as such.

“The reason I’ve chosen him for Sparta and the Spartans is because he’s the first surviving author who describes the Spartans for us. He doesn’t just talk about them in the Persian Wars, he actually introduces us to the Spartans and tells us about their practices, the different ways their society works and its historical origins. He travelled to Sparta, as well, probably around 450 BC, which makes him quite special for us as a primary source.” Read more...

The best books on Sparta

“The main subject of his Histories is the Persian invasion of Greece, but he does a lot more than just write about the Greco-Persian wars. He’s very interested in ethnography and documenting the specificities of different cultures beyond Greece” Read more...

The best books on Thucydides

” The key word is ‘thomata,’ which means wonders or marvels in Greek…The framework is signalled right at the beginning. It’s all going to come around, at the end, to the greatest marvel of all, which is the fact that there had been a series of great Persian invasions of Greece—one in 490 and then again in 480/79—where Greece is wholly outnumbered and yet they win. When he gets to that, he tells that story and he tells it marvellously. But there are many things along the way. In fact, after the first 40-50 pages or so, Greece rather drifts out of view.” Read more...

The best books on Ancient Greece

“He is the father of us all. I read it when I was at school and he’s really the first one who goes around with his eyes and ears and notebook open, recording all these fantastic stories and trying to put it all together to work out what happened and why.” Read more...

The best books on The History of the Present

A great history listen of the earliest continuous Greek text in prose to survive.

Other books by Herodotus 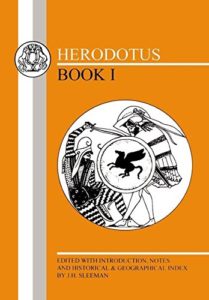 The Histories (in Ancient Greek)
by Herodotus