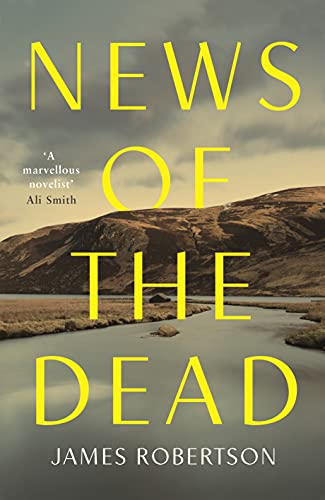 News of the Dead

“Behind the beguiling, interlinked narrative of three characters from different periods of history—an Iron Age hermit, a nineteenth-century literary conman, and a child thrown out into the world from war-torn Europe—is a profound appreciation of a landscape, the rocks, the rain, the streams, trees and mosses of the remote Scottish glen where these three lives are lived. In our own restless, shifting times many of us have lost any sense of rootedness to a particular place. James Robertson’s novel draws us gently back to contemplate the importance of place and nature in our lives. For many of us, an appreciation of our homes and our surroundings has been one good thing that we will take away from our months in lockdown.” Read more...

I’ve been thinking about it for about five years, so it’s taken a while for it to come together. I wanted to write a novel that was set in one place, but that took place over a huge amount of time. So I invented this glen, Glen Conach, which is, in my head, not far from where I live. There are three stories going on: the story of Conach himself, an 8th-century Christian missionary to the Picts who becomes a hermit in the glen; then a story set in the early 1800s, where Charles Gibb comes to the big house in the glen to look at this manuscript about the life of Conach; and finally a modern story narrated by a woman called Maya, one of the oldest residents of the glen in the year 2020.

It would appear that there are no connections among these stories other than the fact that they’re taking place in the one place, but the more you read, the more you realise there are threads linking them. Themes of refuge, of arriving and leaving and looking for a place of safety. That’s one of the biggest questions facing us today: people are on the move, forced to move because of war, famine, lack of jobs, political collapse, whatever it is. People are on the move because they want a better or safer life for themselves and their children. Who can deny that that is a legitimate and basic aspiration for any human being?