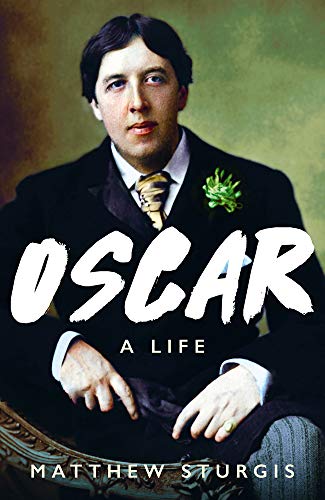 Oscar: A Life by Matthew Sturgis is an authoritative and highly readable biography of the Irish-born playwright and wit Oscar Wilde (the last biography was published 30 years ago). In 2019, Oscar: A Life was shortlisted for the prestigious Wolfson History Prize.

Before he left Oxford Oscar Wilde told a friend that if he couldn’t be famous, he would be notorious. In the end he acquired each in greater measure than he had bargained for or could cope with. Matthew Sturgis’s new biography, Oscar: A Life, shows that Wilde worked hard for them. In a very modern way Wilde was famous for being famous before he had actually done anything. And, as with modern celebrities, it was his early fame as an aesthete – parading round London with long hair carrying sunflowers – that led to his first serious gig, a lecture tour of the United States. The tour was gruelling and Wilde endured much mockery, but took it all in his stride, happily lecturing miners in the mid-West as well as more sophisticated East-coast audiences on aestheticism. He earned plenty of money, which he spent extravagantly. It was all part of the carefully choreographed image.

Oscar Wilde’s story is gripping and his fame grows with every passing year. Books and articles have been published on every aspect of his life, not to mention feature length films starring Stephen Fry and Rupert Everett (we recommend both). There are statues of Wilde in London’s West End and in Dublin. His tomb in Paris is covered in lipstick kisses. But Wilde’s fame as a gay martyr, the victim of a puritanical and hypocritical society has come at the expense of his notoriety. Wilde is in danger of becoming a cuddly national treasure, a prototype Stephen Fry.

Sturgis’ book rescues him from this fate. He shows how during the years of Wilde’s burgeoning fame in the 1890s, he courted notoriety with a very reckless – and very gay – abandon. Sturgis places Wilde’s gay life in the wider cultural milieu that was pushing at the boundaries of Victorian sexual hypocrisy. Wilde emerges as a much more interesting character, perhaps more flawed and certainly more outrageous than he was painted 30 years ago in the last full biography by Richard Ellmann.

If Wilde emerges as a more complex character, his lover, Lord Alfred Douglas, emerges from Sturgis’ book as a monster of epic proportions. Douglas led Wilde to disaster, introducing him to the world of blackmailing London rent boys, spending all Wilde’s money and hardening the playwright’s heart to his wife and family. From this book it is clear that it was “Bosie” quite as much as his father, Lord Queensbury, who put Wilde in the dock. During his prison sentence Douglas largely ignored Wilde. After Wilde’s death he did his best to trash his former friend’s reputation.   Before his fall, Wilde tried to break free of Douglas, but somehow Douglas always contrived to effect a reconciliation. What is more astonishing is that, after his release from prison, Wilde took up with Douglas – who hadn’t changed a jot – thereby ensuring that he would never see his beloved children again. In De Profundis Wilde claims that he never wrote a thing when Douglas was with him. Sturgis shows that after prison there were attempts by his friends and Wilde himself to get new literary projects off the ground, but nothing came of them. The great mystery of Wilde’s life that emerges from Sturgis’ book is not why he threw it all away, but why he threw it all away on someone as undeserving as Douglas. It must have been love.

” It’s just a wonderful all-round picture of this extraordinary, complicated man. Oscar: A Life is very good at taking a cool look at Wilde and revealing just how self-destructive he was and how destructive he could be to those around him.” Read more...