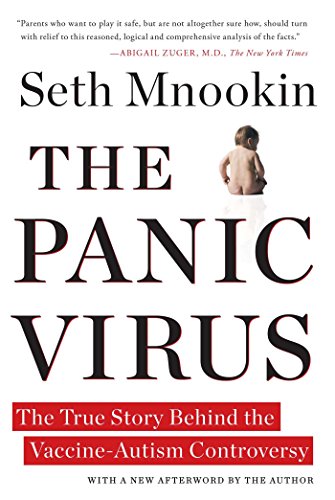 The Panic Virus: The True Story Behind the Vaccine-Autism Controversy

In The Panic Virus Seth Mnookin, Professor of Science Writing at MIT and former journalist tells the story of the vaccine-autism controversy, and how so many people came to believe in a link between autism and the MMR vaccine, even though that link was completely discredited and refuted.

“I wanted to do a couple of things with my book. One, I started writing this before my wife and I had children, but at a time when a lot of our friends were having kids, and this was clearly an issue that they were going through. I was in a unique place — I’m a journalist and I wasn’t working on a long-term project at the time — and I could do what a lot of parents wished they had time to do, which is spend two years just looking at these issues, and doing the research, and talking to the people involved. Then I was able to say, “Ok, here I am. I’m not someone who works with pharmaceutical companies, I’m not someone who is part of the medical establishment. Here’s what I found.”

Another theme I really wanted to look at is why it is that all of us find it so hard to accept that things that we might have believed or thought were true, in fact aren’t, when there’s evidence that shows that they’re not. One of my conclusions in the book — especially looking at parts of the autism community that have organized around anti-vaccine principles — is that what you were seeing was not so much a reaction against vaccines, as the fact that there were lots and lots of families who were scared and frustrated and upset and angry about the situation they found themselves in. Oftentimes they were not getting the type of support or medical care that they needed or deserved. And I think it’s a natural human tendency to look for answers. In looking for answers to unanswerable questions — Why did this happen? Why did this happen to me? What can I do about it now? — questions to which we still don’t have a lot of answers, you have a group of people who decided “OK, this is going to be the answer that answers those questions.” One of the things I hoped to do in the book is show how that happened in this particular case, but it’s something we all do, whether we know it or not, every single day. We need to be on the lookout in ourselves, to make sure that when we are making decisions and reaching conclusions we are doing so because of facts and evidence and not because of an emotional reaction.”