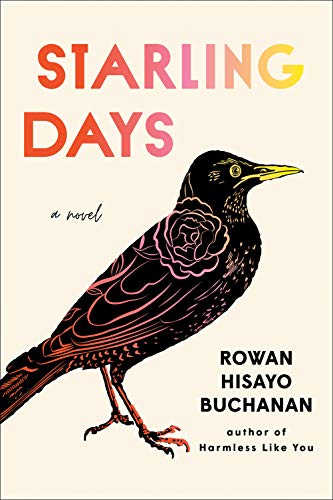 Rowan Hisayo Buchanan’s thoughtful second novel portrays a marriage in crisis following a suspected suicide attempt. It was shortlisted for the title of novel of the year at the UK’s Costa Book Awards in 2019, and released in the US in early 2020.

“A moving portrait of a marriage troubled by mental ill-health. Softly spoken and perceptive, it is a book that asks us what it means to live when you’re not sure you want to – and how it feels to act as spectator to someone else’s pain.” Read more...

Five Books: This is your second novel, a follow up to the excellent, award-winning Harmless Like You. Could you tell us a little bit about Starling Days?

Rowan Hisayo Buchanan: It begins with a woman standing alone on the George Washington bridge. It is night and Mina is staring down into the black water. There’s a bruise on her knee and she hasn’t shaved her legs that morning. She is thinking about the biology of drowning when a police car pulls over and the officer demands she step away from the rail. She is made to get into the car and not released from custody until her husband, Oscar comes to collect her. The novel is about what happens next to her and Oscar and the life they’ve been trying to build together.

Mina is a Classicist. How does mythology influence the book?

The myths are harsh and beautiful—a bit like life. They are stories that try to allow us to grip better the confusion of living. And in many ways that’s what I want from all fiction.

When you learn about mythology in school, people tell you that it is what the ancients believed because they didn’t have enough science. These days, we have formulae to understand how the sun generates heat and why the world turns. Yet I meet so many people who are fascinated by myth and legend—by the sun god in his chariot and the doomed-hope of a man walking his wife out of the realms death.

Lately there has been a huge interest in retellings of the Classics. I’m thinking of Madeline Miller, Nikita Gill, Pat Barker, and Kamila Shamsie. I didn’t want to retell a particular myth but instead hoped write a story about a myth-lover. I was curious about what was summoning this desire when we have more factual ways to talk about the human experience.

I was obsessed with Persephone getting taken down to Hades. We’d already learnt about the earth rotating. I knew it wasn’t literally true that her kidnapping caused the seasons. But it felt essentially true. It felt like it explained something about what it meant to be alive.”

“Okay. I was like seven, so I probably didn’t use those words in my head. I probably just thought they were magic.” But she had felt it. She knew she had. It had felt truer than the tilt of the planet or its long spin around the sun. This world made so much more sense if it was filled with angry, hungry gods. Right now, Persephone would be traveling muddy-footed down to Hades. Her dress would be trailing through molting leaves and the crushed paper cups that once held hot chocolates or lattes or whatever people were drinking to keep warm.

You’ve written elsewhere, very movingly, about loved ones’ (and your own) experiences of suicidal depression. You said: “Perhaps to destroy yourself will always seem like some form of madness to those in the kingdom of the well.” Have you felt there to be different reactions to the book—from those who relate, personally, to its themes, and to those from ‘the kingdom of the well’?

I have. Receiving messages from people who went through similar things, or whose partners did, has been one of the most meaningful aspects of publishing the book. It is particularly moving to me if someone tells me my work has helped them understand themselves or a loved one better. At the same time, there have been some equally kind readers who see it in a different light. Someone described it to me as a book about the early stages of a marriage and trying to shift your life to accommodate another person. And this reading felt equally true and equally meaningful to me.

As a society, I feel that we’re struggling with how to talk about our identities and how to map our experience of the world via these identities. Mina is struggling to know if what she feels comes from not being straight, from the loss of her mother, from being a woman, from a chemical imbalance. She doesn’t know if the world is broken or if she is. She’s also a person trying to build a career, a relationship, and find a path through the world. All of these things intersect and so I wouldn’t want to tell a reader which aspect to focus on.

In the same article, you wrote: “She looked so beautiful in her hospital gown—I shouldn’t say it. You shouldn’t glamorize such a moment.” Could you tell us a little about the ethics of writing about suicidal ideation—and how you coped with this during the writing of Starling Days?

I remember being fourteen or so and scrolling through photos and quotes in which extremely thin and traditionally beautiful, usually white, girls were captioned by sad poems. It was a whole aesthetic. It implied that this sadness was tied to a Keatsian creativity and that happiness was the realm of the mundane. On some level, my teenage brain learned that it was beautiful to be sad but only if you were attractive, creative and achingly thin. This aestheticization made the sadness feel commercial and unreal. It looked more like fashion and less like pain. I knew when I decided to write about depression that I didn’t want to contribute to this narrative.

Yet I didn’t want to write about mental illness as only the hair in the shower drain and the numbing inability to get out of bed. I have known humans of many sizes who struggled with depression. Many of them seem beautiful to me. Some are poets. Many have moments of deep insight. And yes, some of their insights are connected to their struggles. But I believe that they are creative and interesting and capable of great love not because of their depression but despite it.

In the end, I tried to write illness not as better or worse but just as I see it. It is the work of writing to try and present a world that is as clear and true as you can make it. Even in fiction, you reach for truth.

Writing Starling Days, I imagined a character who falls head-numbingly in love with a city, with the gods, with even the white tiles in a café. And yet she is someone who struggles and struggles.

The book features a bisexual love triangle. There have been some other high profile books that feature similar love triangles in recent years – I’m thinking of Conversations with Friends, and more recently Exciting Times. Do you feel that bisexual identity is better understood and represented now, in literature and in society more generally?

I do think it is becoming better understood and represented. I have the utmost respect for Rooney’s work. I read both her books as soon as I could and was completely absorbed. I find it interesting that a lot of early flutter about Conversations with Friends focused on female friendship, when in some ways to me that book has a lot of romance and very little friendship at all. The title feels tinged with sarcasm to me. I just read Exciting Times, which was delightful and made me laugh a lot, and I’m looking forward to more of Naosie Dolan’s writing.

The nature of being bisexual is changing. Mina is in her thirties and she has always known she was bisexual, but she hasn’t known how to act on it or how to express those desires. In part, she was based on the women I know who didn’t come out until their late twenties and early thirties. Some of whom were already in long term heterosexual-appearing relationships. Mina only acts on her bisexuality after she is married to a man. And she struggles to understand what this means. She wonders if this is what she’s always needed. Or, if she’d fallen for another man, whether it might have held less promise.

I believe and hope that the next generation of bisexuals will feel freer at a younger age and that this will change the stories we tell about bisexuality. One day maybe we’ll think of them as love triangles with gender only as a footnote. At the moment it feels important to write and talk about gender because it does make a difference. Mina and Oscar and Phoebe’s genders do matter. Oscar pushes his wife towards this other woman because her female-ness makes her appear safe in a way that another man might not. Mina lets her feelings escalate believing she’ll never act on them. And thus, Mina and Phoebe end up pushed closer and closer together.

What books you would describe as literary influences upon Starling Days, and your writing more generally?

I believe that a writer starts being influenced as soon as they learn to read. As a young reader you believe thoroughly in these worlds, whether it be the celebrated chaos of Where The Wild Things Are or the furious wisdom of the Red Queen in Through the Looking Glass. And you want to create a world that feels just as true to your reader.

A writer’s voice is stitched from ever book they’ve ever loved. And I have too many to name here. But I think of this book as particularly descended from the work of three writers—Anita Brookner, Virginia Woolf, and Natsume Sōseki. Perhaps because each of them write about love without the sugar syrup that is often poured onto that emotion. They write about fidelity, longing, loneliness, confusion, hypocrisy, and connection. And that is what I tried to do.

What writers are publishing today that you’re most excited by?

I am terrible at these lists because I end up wanting to recommend a library. So, this list is formed of a quick skim of my bookshelves.

What does your novel-writing process look like? Do you start from the beginning, do you write in fragments? Do you redraft many times?

Normally, I start from the beginning with an idea of where I am going but no idea how I will get there. I write into that wondering. Afterwards, I edit. Usually I spend as long or longer editing than I do writing.

Are you working on anything right now?

Yes, although it is appearing in fragments which is unusual for me so I’m waiting to find out where it will take me.